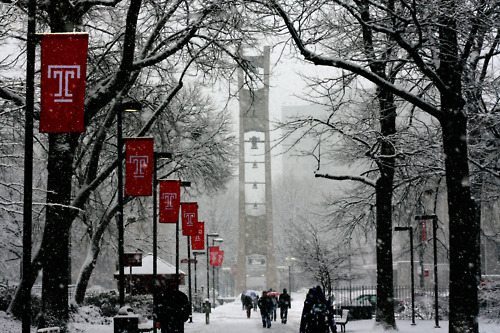 Temple University Campus RepsFebruary 27, 2014
Life0 Comments 0
Share
Tweet
Email
Chynna Mela is a senior journalism student at Temple University and an SC Campus Representative. She can usually be found planning her fall wedding to Harry Styles, attempting to become the female version of Perez Hilton, or eating peanut butter straight from the jar.

Planning on being a Temple Owl? Here are 10 tips you should know before move-in day.

Diamond Dollars are Temple U’s very own currency. Starbucks, the bookstore, Cosi, laundry areas, printing services, the local bars on campus…EVERYWHERE accepts these as a form of payment. They are a quick and easy alternative to carrying around cash. The best part? You can have Temple automatically e-mail your family when your account is running low so they know to add more so you can print your paper on Gilgamesh, or..ahem…buy a round after a long day of classes.

2.  Be Familiar With This Guy

It can be argued that Richie Jr. serves the best food on campus. Breakfast time? Try a breakfast wrap with three eggs, cheese, hash browns, sausage, and hot sauce.  Lunch time? Try a chicken finger wrap with honey mustard, lettuce, and tomato. If it’s cold out you won’t be waiting more than 10 minutes for your food. If it’s warm out enjoy the outdoor seating. However, you still won’t wait long as Richie is known for serving quick and quality food for students with busy schedules and slim wallets. As an added bonus he is highly hilarious on Twitter. See for yourself: @iloverichies

If your hometown is not a city setting it is understandable if you cringed at that suggestion. However, gather your $2.75 for the fare, walk down to Cecil B. Moore station, and wait. The subway is an incredibly cheap and quick form of transportation to head into the city which opens up, as the Little Mermaid would say, A WHOLE NEW WORLD. We’re talking brunch places that serve up french toast so delicious it must be a dessert, incredible shopping, hip bars, countless concert venues, and gorgeous parks you wouldn’t expect to find in a city. Also, Philly has hilarious subway performers that will often entertain you on your commute.

Sure, sure go to the Temple basketball and football games. After all they are free for all students, and it’s your duty as a Temple Owl to attend. However, you should also hit up the Lincoln Financial Field and Citizens Bank Park for a day of tailgaiting and cheering on Philadelphia’s finest. You haven’t seen Philly until you’ve seen locals cheering on the Phillies, participated in Dollar Dog Night (hotdogs for a buck), and have watched the Phanatic dance. However, do not show up in an opposing team’s jersey. Philadelphia fans are known as the Broad Street Bullies for a reason.

6. Add Maxis on Tuesdays and the Draught Horse on Wednesdays to Your Schedule

Now I’m not saying you have to drink during the week. I’m not even saying you should. However, if you were to be in need of few mid-week drinks to keep your spirits up (and are 21 of course) the best places to go on campus are Maxis and the Horse. Why? Well every Tuesday Maxis hosts karaoke night, and I assure you there is no better way to raise your spirits than to watch a few of your seemingly uptight classmates belt out Bon Jovi’s Livin’ On a Prayer. On Wednesday’s the Horse holds dollar beer night which students have affectionately named ‘White Girl Wednesday’ or WGW. Why the nickname? Well, beers are for a buck, you can buy them in packs of 12, and if you don’t have an 8AM the following day you will probably spend enough dollar bills to make you act like a girl that can’t hold her liquor. Oh, and if you do have an 8AM that doesn’t rule going to class out. Don’t worry if you’re slightly hungover: the kid next to you is too mortified you saw him sing Bon Jovi on Tuesday to judge you.

This is not just a beware-of-the-freshman-fifteen tip. This is a you’ll-never-have-the-opportunity-to-have-a-free-gym-membership-again tip. Temple has TWO gyms complete with an indoor track, every machine known to man, weight rooms, basketball courts, raquetball courts, and swimming pools. There are also group fitness classes hosted by certified instructors such as yoga, spinning, cardio kick, and pilates. Also, the freshman 15 are very very real. Those homemade waffles in Johnson and Hardwick’s all-you-can-eat buffet style dining hall are 1,000 calories per serving. And thats BEFORE you add the ice cream on top.

If you’re like me and find yourself constantly glued to your phone to read professor’s e-mails and text group project members your phone will most likely die approximately every 25 minutes. If you commit the sin of FORGETTING your charger don’t fret. Temple has generously placed phone charging stations around campus to juice up your battery so you can get back to taking obnxious selfies for Snapchat.

During my freshman orientation I was given the advice “Never go more than four blocks off campus in any direction.” Smart advice. Philadelphia may be the city of Brotherly Love, but Temple is located in the heart of North Philadelphia, and if wandering alone it can be quite dangerous. If you are on campus do not worry. Temple is adamant about safety and has police patrolling on bikes as well as 9-1-1 booths that provide a button to press that ensures an officer will arrive in a flash.

The only way to enjoy college is to embrace all it has to offer. If you enjoy athletics but can’t commit to a demanding team schedule you can join an intramural team. Join a sorority or fraternity. Whether it’s applicable to your major or for leisure; join a club. This tip applies to any university. You only have four (okay, okay maybe five) years to be an undergraduate college student. Make them count.

Did these tips help you prepare to be a Temple Owl?