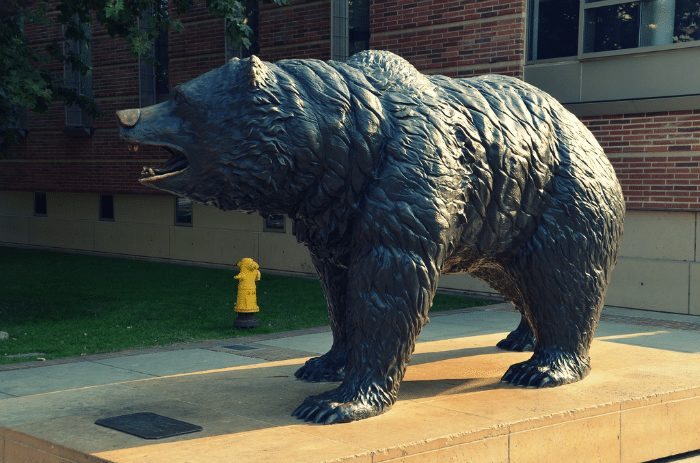 Mary Dishigrikyan is a fourth-year Psychology and English student at UCLA. She is a logophile with a passion for puns and Disneyland.

Are you nervous about attending UCLA? Fraught with fear over the prospect of going to college? With the survival tips listed below, there’s no reason for you to be – here’s a list with some of the most important things to keep in mind to help ensure your survival at UCLA:

1. Make a name for yourself (with professors)

Talk to your professors. Seriously. There are little satisfactions greater than receiving knowledge about a subject from someone who knows about that subject like the back of his or her palm. So go to office hours, have a chat with your professor, and even ask for advice about the career path you want to head down. Professors are always there for you and happy to help you – it’s in the job description! Plus, it feels kinda good when professors call on you in class by your name.

2. Make a name for yourself (with others around you)

Talk to people in your classes, in your dorms, and even the people you’re stuck standing next to in the humongous line to purchase your textbooks. Make friends. Ask them about the classes they’ve taken and what professors they recommend. Hang out with them outside of class. The people you meet in college aren’t out to get you, or competing with you over a GPA (sound familiar? High school much??). They’re awesome people who won’t recoil when you talk to them, and oftentimes, when you do talk to them, they end up being one of your closest confidantes.

Don’t actually fight. Learn the 8-clap, however, and you’ll be chanting the word rigorously at every football game, basketball game…pretty much any high-stakes sporting event you go to in order to support the Bruins. The bottom line is to have some school spirit! UCLA has some of the best professors and athletes in the U.S., and showing your support for both will allow you to bask in the victories and achievements of both. 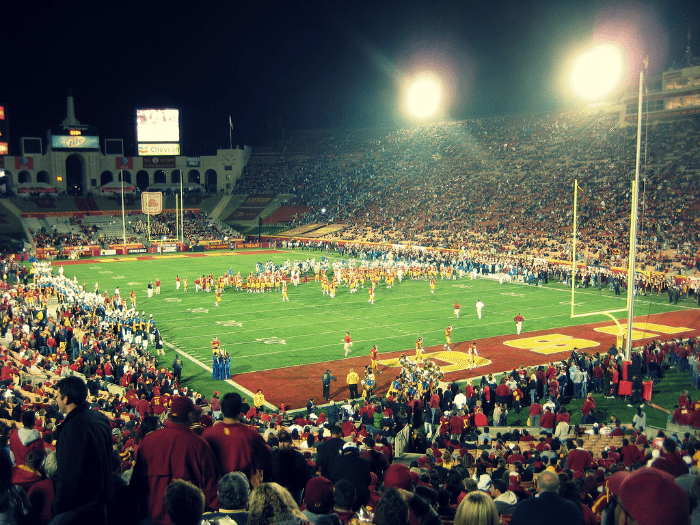 I’ll mention it here for demonstration purposes: Trojan. The rivalry between UCLA and USC has been ongoing for decades, with the victory bell going back and forth between the two schools depending on who wins the football game. The pranks USC plays on us can be funny or outright brutal, ranging from putting red dye in our fountains, releasing crickets throughout Powell Library, and even going to the trouble of replacing every Daily Bruin in every newsstand with copies of the Daily Trojan instead. So if you’re a Bruin, don’t forget to have a passionate dislike for all that is associated with USC, and if you really wanna push things, you can even attend the annual Beat ‘SC bonfire held during Blue and Gold Week!

Don’t let yourself get distracted when you’re studying, doing homework, or writing that dreaded 10-page paper for your take-home final. The more you put it off, the more you’ll hate yourself for putting it off. The solution? Start things as soon as you get assigned to do them. Once you start working on something, odds are you’ll want to continue being productive and get a load of things done in one day. So don’t tell yourself you’ll get something done in ten minutes, because we all know what that really means is maybe you’ll get it done in 2 hours, but it probably won’t be done until the week after it’s due. Do you what you have to do, and award yourself afterwards with a drink, a movie, or a really big ice cream sundae. 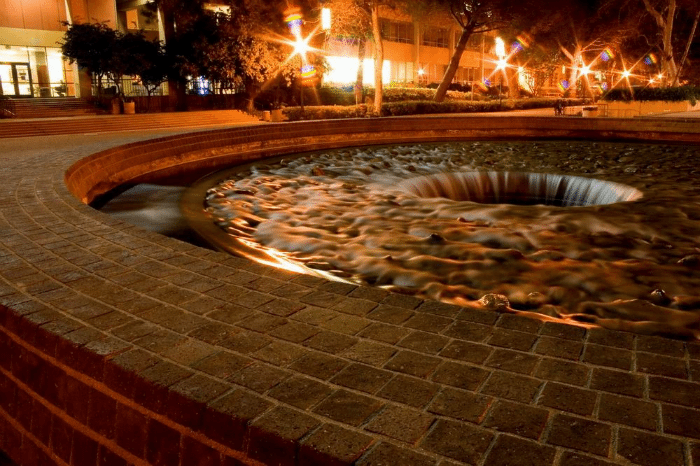 6. Don’t touch the inverted fountain, or step on the sixth stair of Janss Steps, or…

At freshman orientation, you’ll get a day-long tour of the school during which the tour guide will give you some important tips about the school. For instance, they tell you to rub the Bruin Bear’s back foot for good luck on your exams, to avoid stepping on the sixth stair of Janss Steps because of the Janss brother buried beneath it, and not to touch the water in the fountain until after you graduate. The last tip lends itself to crowds of Bruins dancing and flailing about in the fountain in their caps and gowns, and the other two…well, they’re just plain false. They’re urban legends. Nothing will happen if you step on the sixth stair at Janss, and the only way you’ll ace your final is if you study for it – but if you do decide to rub the bear’s back foot, you might want to use some hand sanitizer afterwards. It’s worn beyond belief. 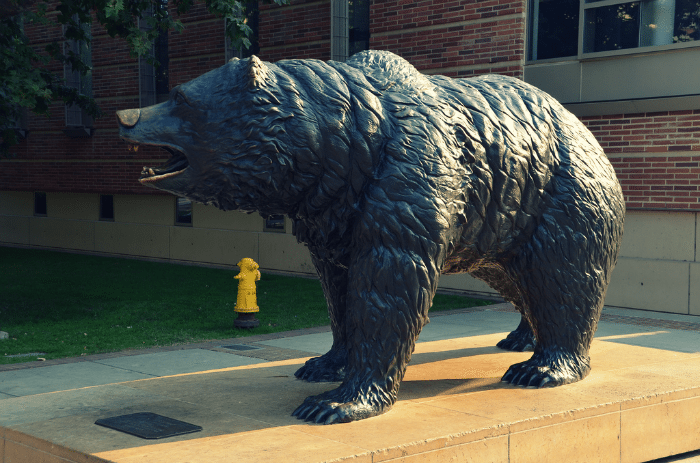 7. Know what places to avoid

If you don’t want to spend half an hour looking for an empty seat to study during finals, getting frustrated because 60% of the ones that are taken are by people browsing Netflix, opt for anything but Powell Library. As beautiful as it is, it’s always overcrowded. Young Research Library, although far from the dorms, is vast in size and offers a plethora of seats. The Biomedical Library, although a bit creepy and quite a walk from the dorms, is one of the most quiet libraries and has flexible hours. Also, if you’re passing through Ackerman Union in hopes to use the bathroom, avoid using the messy and congested ones on the A-level and work your way up to the 3rd floor bathrooms. They’ve got what looks like a thousand stalls and never more than 5 people using them.

If there’s a conflict with your schedule, or you’re just really tired and/or sick so you can’t make it to class, don’t fret. Sometimes your classes are audio or video podcasted, so if you’re worrying about missing something in class, or if you weren’t paying attention while you were actually in class, check out the BruinCast website to see if it was recorded. If not, ask one of those handy-dandy friends you were advised to make earlier in this list for their notes! More often than not, students won’t mind e-mailing you copies of their notes.

9. Enjoy what goes on

The on-campus events are entertaining like no other. Pay attention to the free movie screenings and upcoming concerts, and try to attend Bruin Bash during the beginning of each school year. Most of these events are free, and going with a friend or two is sure to be a good time.

Take a break now and then, a road trip with some friends, or even a nighttime exploration of Westwood. Allow yourself the luxury to let loose, go tunneling, and participate in the Undie Run or the Midnight Yell. As a college student, classes will be an essential part of your life, but enjoying the moments in between will make your experience an unforgettable one. 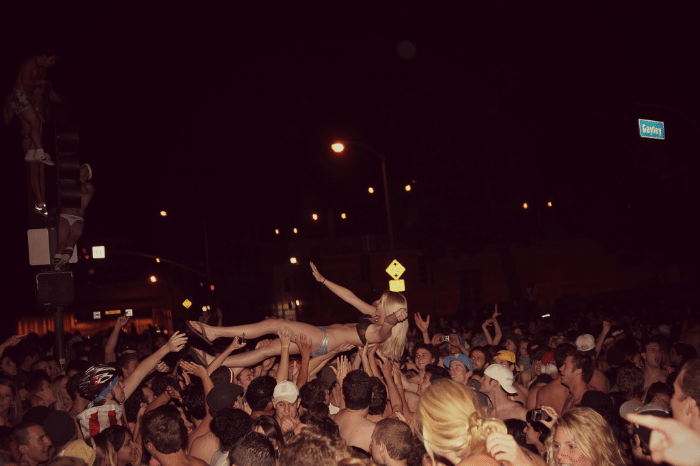 What survival tips are most helpful for you?