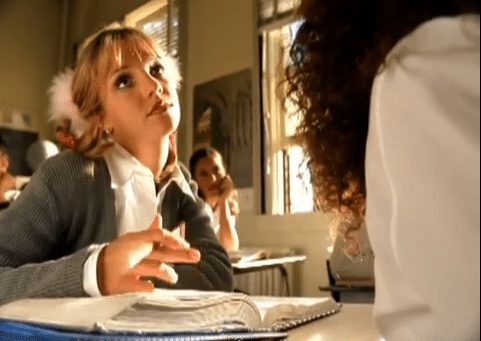 It’s a small, small world and whether you’re apart of the glamorous web that makes up Hollywood or living on a college campus that sells pizza for a buck the types of people you meet are so similar you’ll have to do a double take. Here are 10 types of girls you’ll meet in college…CELEB style.

1. The Girl That Is Still In Love With Her High-School Boyfriend

He dumped her a week into the first semester Freshman year citing long distance as his reason, but she still loves him. Their prom pictures are sticky tacked in a heart formation on the wall to the right of her bed, she sleeps in his Varsity football sweatshirt every night, and she still has him saved in her phone as <3 Baby. She also has this annoying habit of comparing EVERY guy she meets to him. When you finally get her tipsy enough to kiss the cute guy from down the hall she cries after that “his kiss wasn’t nearly the same as *insert ex-boyfriend’s name here*. If you’re her roommate: God Bless. This girl doesn’t have a prayer.

She burps, farts, and slings back enough beers during Sunday football to hydrate a small country.  Growing up with a handful of older brothers has made her completely immune to the weird antics of guys, and she can dish out insults just as well as she can take them. She barely wears make-up, but every guy that meets her becomes smitten by her, and I guarantee you that if you bring her home for a long weekend she’ll steal your brother’s heart. Not that she notices. Not realizing she’s a catch is her best quality.

Ugh. You love to hate her. At a party she nurses the same beer all night so she is sober enough to take care of anyone that has a biiiiit too much to drink. She always has an extra granola bar in her bag just in case she hears someone’s stomach growling in her 8AM, and she remembers everyone’s birthday and whether they prefer chocolate or vanilla cake. Don’t be surprised when she falls for the notorious campus bad boy because she loves to “fix” people. A year into their relationship he’ll do a complete 360 and become the SWEETEST guy and claim it was allllll because of his darling girlfriend. Sigh.

She’s vegan, barely brushes her hair, and is showing a few inches of her yoga toned tummy 95% of the time. A permanent smirk-grin is always plastered on her face because she literally LOVES LIFE. You won’t find her rushing around campus but instead will be moseying around enjoying the scenery. When she walks into class her ring-clad hand is clutching a massive green tea from Starbucks and she’ll probably be sporting a henna tattoo on her dominant hand. She’s probably some sort of graphic design major taking Sociology classes to “remain grounded”. You’ve tried to dress like her a few times, but you just looked life a second-rate version of Stevie Nicks.

Let’s me be clear. You don’t actually MEET her. You AVOID her. You’re sure she’s very pleasant and all, but the one time you tried to make friendly eye contact she definitely didn’t reciprocate. Her main goal in life is to be dark and jaded, and she’s being an over achiever with those goals. The only fear she has is someone searching through her old Facebook photos to find proof of her preppy days (not that she ever goes on her Facebook), and discovering that her mom favors paisley print dresses and leads the PTA at her old high school. You’ve never seen her eat except for chocolate chip cookies and coffee and you consider adapting her diet because she’s stick thin. You also suspect her clothes are not actually clothes, but lingerie. Whatever floats her boat.

6. The Straight A Hottie

You’re positive that she doesn’t sleep yet when she sits in the front row of class at 8AM there isn’t a hint of a dark under eye circle. She rocks glasses and a loose ponytail better than you thought humanely possible, and she is one of those people that actual retains the information she’s learning instead of just cramming it in the night before (me). Her drink of choice is probably something no-nonsense like whiskey, and on the rare occasion she goes out it’s a big to-do. She is president of a really-really boring club like the Young Republicans Association. She’ll probably end up dating a slacker because she is so competitive that the idea of dating someone smarter than her makes her cringe. Guys love the mysterious genius that she is, and you have a strong suspicion that she’ll end up becoming First Lady.

7. The Slide By Student

I hate to say this girl is a typical blonde, but she is. She’s most likely in a sorority on campus, and doesn’t devote herself FULLY to anything but the Greek letters on her sweatshirt. A piece of her is in everything, but only just so. She has a solid 3.0 GPA, but isn’t concerned that it should be higher. She auditions for the Real World every year, and could tell you every bit of celebrity gossip but probably doesn’t know who the governor is. You hate having class with her because she constantly e-mails the class questions that the professor absolutely went over 5,346 times. She’s NEVER single, and most likely dates an athlete with a full ride scholarship. The most annoying thing about her is how long it takes her to decide which drink in Starbuck’s arsenal she should order, and that despite going to the gym once a month she maintains a tiny figure. Brat.

Let me be clear. There is a difference between someone that TRIES to be a fashionista, and someone that just has it. And this girl doesn’t try. She would never call herself a fashionista though, and says she just “puts on whatever she found on the floor”. She is absolutely either a political science major or something artsy, but you’ll never see her studying. She’s probably sitting outside a coffee shop (never Starbucks, too mainstream) flipping through the latest issue of Vogue with a bored expression on her face. When you try to copy her outfit you just look homeless, but when she wears black jeans and a boy sweater she looks straight off the runway.  The gym isn’t an option for her because spandex is never a good choice outfit wise, but she is stick thin and COMPLAINS about it. She’s disgustingly witty and most likely has an a**hole boyfriend because his smart remarks don’t phase her.  Guarantee you’ll see her name as a fashion editor one day and you hate her for it.

(GIF via wifflegif.com)
“She’s dancing on the table” Oh just let her go. “She probably shouldn’t take that seventh shot” Oh just let her go. “Is she ACTUALLY going to dye her hair that color?” Yeah, just let her go. This chick is so good at partying and shocking people that no on would ever dream of stopping her. Anyone else would be carried home the second she even thought of dancing in her underwear at the party, but no one bats an eye when she does it. No one judges her either because thats just who she is. She has sworn off guys and refuses to date, but senior year someone will sweep her off her feet and she’ll be a woman in love. Her partying days will have toned down massively with her new boo’s influence, and she’ll tweet things like “Watching Cupcake Wars on Friday night WHO AM I?”

(GIF via Giphy.com)
She LOOKS innocent. Clean. Sweet. She isn’t. She probably comes from old money and has naturally good looks meaning she doesn’t have to wear any make-up which leads you to think she isn’t a boyfriend stealing bimbo, but she is. Her text game is insane, and no one ever catches her texting their guy. She flirts like her life depends on it, but insists she’s just “really really” friendly. When she invites everyone to her summer house for a long weekend she sneaks off and smooches the “he is technically single but they are practically dating” guy, but will deny it until she is blue in the face. This girl is a VAULT when it comes to secrets, but only her own. She does’t have time to engage in other people’s gossip because she has enough drama in her own life to keep straight. When you see her on campus she is probably sipping on Evian while munching on chicken fingers (good genes) and talking on her phone too her parents that ADORE her. When she starts dating the campus hottie you literally fall out of your chair because you didn’t even know they knew each other.

Which Type of College Girl Are YOU?