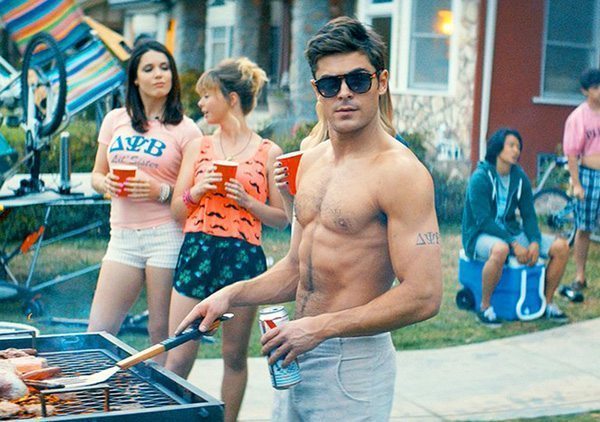 It takes all kinds of guys to make up the male population on a college campus, but some are more distinct than others. Here are 10 types of guys you’ll meet in college and never forget. P.S if the guys on your campus look like THIS feel free to leave the name of your respective university in the comment section. I’d like to transfer there ASAP.

Everyone knows this story. Guys see him as the witty wingman. Girls see him as the hottie’s best friend. Finally one girl drives with him to pick up the keg, waits in line for the bathroom with him, or has a class with him where they sit in the back and laugh at the professor. Thats all it takes. BAM. She sees his full potential, dates him, and the rest is history. He graduates to the cool guy with the drama-less girlfriend, and girls everywhere start noticing how cute, sweet, and silly he really is. He’s a communications major which means he is excellent at talking to people, and he’s got a work study job in the dean’s office (who loves him). Of course he uses that money to take his girlfriend out for cute date nights like ice skating and light shows during the holidays. Sigh.

I do not know what the fascination is, but upperclassmen guys love to take a freshman under their wing. Just one. It’s like a mother duck and its little duckling. They pat him on the back when he hooks up with a hot (and older) girl, make sure his alcohol stash is always flowing, and when they graduate they send him on his way. However, the freshman can’t be just any freshman.

1. He has to be witty, but must chose the APPROPRIATE moment to crack a joke. Not too many, and not too soon into the friendship.

2. He has to play it cool. If he happens to attend a older kid’s party, or heads to the local bar he can’t bounce on his feet and repeatedly say “OMG OMG wait until I tell my roommate what I did tonight!!!” He has act like he is already over it.

3.  He has to be an undeclared major. No one likes a youngin’ that has his life more together than the senior.

4.  He must never, ever, EVER go above the older guys and betray them. If he is told to stay away from a certain chick he avoids her like the plague. If he screws this up they won’t yell at him, but he’s done. Their back is turned and they move onto the back-up freshman.

Note that I didn’t call him “They Guy In the Band”, because he isn’t. He is THE band. His indie-alternative band is smalltime on the official charts, but BIG time at his university. Despite being from rural Pennsylvania and born in 1991, he speaks like Marlon Brando, but that doesn’t matter because his language is girls. They drool over him and he’s there to soak it all up. He is an English major (but doesn’t attend class), and he makes it very clear that he isn’t a journalism major in any, way, shape or form because he will not be WRITING the articles he will be the SUBJECT of the articles. He also has no friends besides his bandmates, but thats the way he likes it.

The first thing to know about this guy is that he despite common belief he doesn’t know hes hot. He turns on the charm to compensate for what he thinks he is lacking. Second, he actually isn’t a ladies man. You see him walking drunk girls out of parties all the time, but in reality he is tucking them sweetly into bed and placing Advil and water next to their beds.  He loves to keep people guessing, and takes Yoga classes to futher the female facination with him. He has a lazy way about him (wrinkled clothing, slow speech, never gets overly excited about anything), and hes never prepared for class. His books are shoved all over, and though he hands in his Public Relations paper late he gets an A+ (female professor). You see him EVERYWHERE on campus because he is friends with everyone, and somehow everyone always “owes him a favor for that thing”. His hobbies include smirking, winking, and telling dumb jokes. Paying for alcohol is a mystery to him because he simply places his arm around a girl clutching a water bottle filled with whatever, and whispers in her ear “Miss can I have a bit of that?” SOLD.

He isn’t on a sports team. Unless of course you consider he and his lifting buddies (you have no clue what they look like because their Facebook profile pictures are of their left bicep) a team. His Instagram feed is pictures of pure meat and the captions are #Protein #DOMINATION and #CrossFitLife. The only word to describe him is “intense”, and he has so much energy you suspect he has a permanent IV of coffee dripping through his veins. He’ll talk about his major (athletic training) to anyone with enough patience to listen, and the only girl he follows on Twitter is Shawn Johnson. You cringe when you see him at the gym because it’s only a matter of time before he sprints over and tells you that you’re running incorrectly and if you just arch your foot a little more you could run TWENTY miles instead of one. Thanks buddy.

Awwwww. When the weather is warm follow your ears outside and you’ll be sure to find this guy playing Wonderwall by Oasis on his accoustic guitar (named something like Fred or Darcy) on campus. He’s one of those guys that girls are afraid to date because they know that they’ll hurt him. When he drinks it’s just a few craft beers at a dive bar, and he goes to concerts alone because to him it’s a religious experience. He is probably a journalism major because he wants nothing more in life than to be a music reporter, and his mom sends bi-weekly care packages that include sugar cookies and hand written notes. He never goes to the gym, and therefore says he doesn’t care if a girl isn’t a toothpick that he actually PREFERS them curvy. When he finally does date a girl they’ll have met when they shared a bench in park and she spilled her coffee and he went and bought her a new one as the Autumn leaves fell around them softly. Okay I’m done with this one. Too far. The point is he’s PRECIOUS.

Every morning you see this guy at your local coffee spot on your way to class. You notice that he gets a small black coffee and a blueberry muffin everyday, but he doesn’t have to speak a word because the cashier knows his order by heart. Every. Single. Day. Clockwork. You’ve taken a genuine interest in this fella, and one day hes gone. Poof. Not at the coffee spot. A week goes by and he still hasn’t appeared for his morning fix. You lie in bed at night creating a plan of attack of how to figure out who he is, and you decide to ask the cashier about him..ya know..casually. Next morning:

You: “Hi uh, do you know where that guy is? That orders the small coffee and blueberry muffin?!”
Cashier: “Huh?”
You: “You know, the guy who used to come every morning and order the same thing?”

At this point the cashier makes a point to tell you to either order to get out of line, and you enter phase two by asking a group of other regulars if they’ve seen him and NO ONE ELSE HAS A CLUE WHO YOU ARE TALKING ABOUT. And guess what? You’ll never know who he is, until 10 years later you see him on the cover of Forbes Magazine (think Christian Grey). P.S You had to find a new morning coffee spot.

This guys interests include America, outfits that consist of boat shoes and pastel colored oxford shirts, Republicans, country music, and Greek life. Chances are he is a buisness major, and if you aren’t in a sorority you have a slim to none chance of dating him. He drinks 5/7 days of the week, and can’t wait to take his future son to little league games. He brags about being a master chef on the grill, but in reality his he just makes his mom take pictures of him holding the spatula. Meal plans are his favorite part of college (have you ever seen a fraternity kitchen?), and it’s doubtful he’ll graduate in 4 years. He is also very sure of himself, and his cocky attitude is what girls love. Oh, and the only physical activity he willingly particiaptes in is club teams for his fraternity. Unless of course you count Greek Olympics once a year where he tries hula hoops and carries a chariot with his smallest of fraternity brothers perched on top.

This little cutie is a single pringle, but trust me he has loooottttts of ladies in his life. Except he’s friendzoned by all of them. He’s earned the title “Drop-Everything-Now” because that is exactly what he does. He’ll do anything he can to be everyone’s best friend. Need a ride home for Christmas break even though it’s an hour out of his way? No problem. Need a friend to go to campus’ health services with you? No problem. Need someone to spot the cash for a keg deposit? He’s got it.  He’s the go-to for a shoulder to cry on when  a girl is dumped by her boyfriend. He even brings their pals Ben & Jerry with him for extra support. In class he is the guy that never forgets his books and lets the people sitting next to him quick skim the material before he even reads it. The sad part is when he finally does get a girlfriend she cheats on him and says its his fault for always hanging around with other girls. Poor guy. He just wants everyone to like him!

Reasons for drop out:

1. The gen-eds are “stupid”
2. His uncle has a contracting business where he would make way more money than he is now taking night shifts at the campus diner
3. He is going to be an “entrepreneur” and “why go to school for that?”
4. It’s dumb to pay so much to keep his car on campus and he NEEDS it for freedom
5. He secretly just really, really, really misses his mom.

Are These Hotties On YOUR campus?