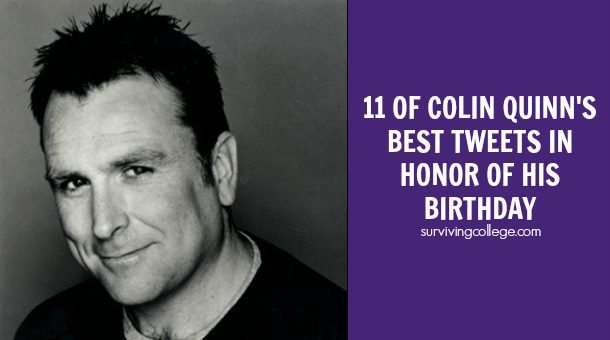 It’s comedian Colin Quinn’s 54th birthday today, and in his honor we have rounded up some of his best tweets from the last couple of months. Some are birthday themed, some are surprisingly poignant and hey, he even added a little grad advice in there too. His followers already seem to be getting into the birthday spirit and if he had an actual cake for every picture of a cake people are sending him, well, he is going to have an awesome day. Hey Colin, feel free to share some of that cake with us…please. #happybirthdaycq!

If you want to give me a bday present I’m registered at Bed Bath and Be the Best You You Can Be Today. That’s what I’d like today…fans.

I’m at the age where the cake costs more than the candles! Whew. Have to wear ray bans when i blow it out. (promoted) #happybirthdaycolin

I’m at the age my back goes out more than I do. #happybdaycq Only the good die young, right Billy Joel? Lol.

..and always remember, if you make a few friends cherish them as you would a favorite stamp or for you ladies a favorite hummel.

Some will fall in love today, some will get bitten by dog and have to go to hospital. Others will buy air conditioners, and life continues.

Laughter is a “humans only” thing. You never see a bug laughing and if you did you’d probably get freaked out and step on it.

Kickstarter trying to raise money for a comedy project where I play a man frozen in early 2011 that unfreezes and comes into todays world.

“Monday is just a Jabroni that needs to be taken down, and smell what you’re cooking”. Vincent Van Gogh

Ever wonder why I’ve never been even asked to do a commencement speech? What am I, not fake intelligent enough? #dontask #windowclosed

And remember graduates the world consists only of carbons and neurons.The other planets are useless, so let’s celebrate earth! (earth chant)

Never fear fans. The hollow laughter of your “peers” will become a funhouse mirror reflecting on their own distorted adulthood.