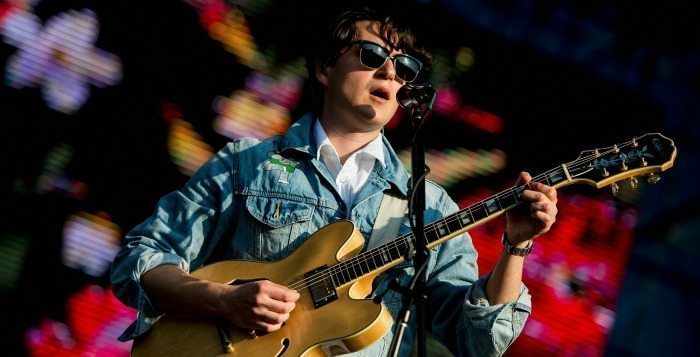 On this day 30 years ago, the voice of a generation was born. Yes, I just referred to Ezra Koenig as the voice of our generation. Have you read his review of the album Drake dropped last year? I definitely nominate this guy to speak for me and our generation. He is hilarious. You may know Ezra best as the front man of NYC based band, Vampire Weekend. This four piece got their start while in college, with all four members attending Columbia University. They released their third studio album last year, and not only did take home the #1 spot on SC’s Top 10 Album’s of the Year for 2013, it also won a Grammy. But we know which one is more prestigious.

I don’t hide my love for Vampire Weekend, and conversely my love for Ezra Koenig. You might remember the breakdown I had when he performed with Karen O at the Oscars. I would argue that Ezra Koenig is one of the best lyricists out there right now. And Vampire Weekend have maintained their very original sound over the years, while taking stylistic risks. They are serious without taking themselves seriously. However it isn’t really hi songwriting that makes me say Ezra Koenig is the voice of our generation. It’s actually his twitter. His twitter that you need to follow immediately. I don’t care if you don’t like Vampire Weekend, that doesn’t matter. If you have twitter, you need to be following Ezra.

In honor of his 30th birthday, I thought the best way to pay homage would be to round up some of my favorite tweets from the last year or so. Keep in mind that this doesn’t even scrape the surface of the gems that come from him in just 140 characters, but I didn’t want to be writing this post until his 31st birthday.

So without further ado, here is definitive proof as to why Ezra Koenig is the voice of our generation. The generation that he likes to call “generation selfy.”

He is knowledgeable re: fashion/culture trends, and their geographic origins

He makes relevant scales via up to date pop culture references

He really looks out for the kids

do high school foreign language textbooks have sections on texting yet? u won’t make any friends abroad if u text like an abuela

He is hip and up to date with technology

can’t believe kids are still using calculators. shouldn’t u be able 2 use a TI-83 app on ur mobile device & post ur graphs on tumblr by now?

Have truer words than these ever been said?

every grunge boy has his soft grunge side

He is a poet

He understands millenial social customs, and the importance of studying/research

I don’t mind that it took u 2+ hrs to respond to my text…as long as u were in the library researching, drafting & editing said text

Again, with the relevant and up to date pop culture references

there is nothing ironic about calling another person “2000 and late.” BOOM BOOM POW is still a relevant worldview in 2k13

He gives us words to live by like this:

too good for the cheap shit, too cheap for the good shit