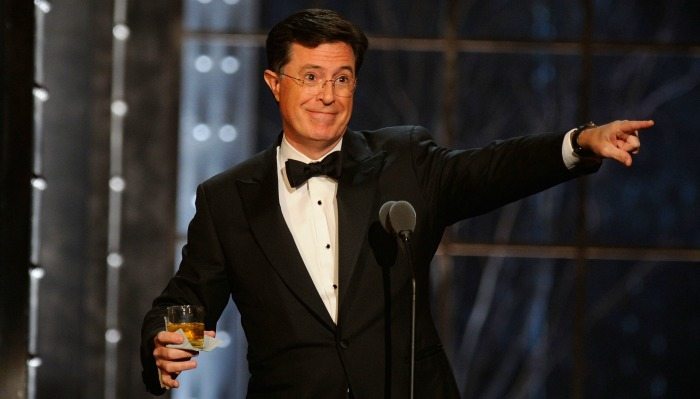 BREAKING NEWS! CBS has just officially announced that in 2015, when David Letterman retired from The Late Show, Stephen Colbert will be the new host. (Take that, #CancelColbert haterz!) It was rumored that Ellen DeGeneres may have been considered for the role, but she recently announced on The Ellen Show that she was staying right where she was and that late night TV wasn’t really her thing. She even acted out what it would be like if she were the host, and it was pretty hilarious. While we love Ellen, and would love to see a lady tap into the late-night scene (seriously, it needs to happen), we’re still excited about the decision to bring on Stephen Colbert. If anything even remotely close to as amazing as his Daft Punk dance video makes its way onto the show, we’ll absolutely be tuning in.

One thing that Stephen Colbert does even better than talk politics and roller skate with Bryan Cranston? Being excited. His reactions are always priceless, and since this is 2014 we’re talking about, noting that they’re GIF-worthy should go without saying. In fact, they’re basically a perfect summary of how we feel knowing that Stephen Colbert is coming to CBS next year.

Since we know you’re dying to express your feels about this decision, we’ve rounded up the best of the best excited Stephen Colbert reaction GIFs in celebration of this announcement. Hurry — Tumblr is waiting!

And then we thought about it some more…

All GIFs via Giphy, featured photo via Getty Images.