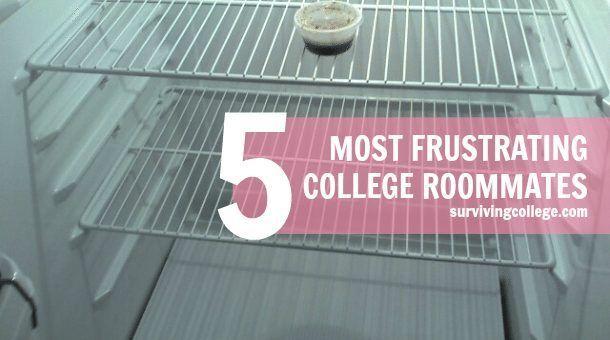 There are good college roommates out there. You might even be so lucky as to have the roommate from my awkward attempt at creating memes last week. (Well, minus the constant smoking.) But there are also bad college roommates out there. We’ve all heard the horror stories. Think expired milk on the floor, vomit on the carpet, and questionable standards of general cleanliness. So here are five roommates that you never want to have. (Roommate ratings are on a scale from 1 to 10, with 1 being the least irritating and 10 being the most irritating.)

The Mixer-Upper is probably the least annoying roommate on this list. The Mixer-Upper will rearrange everything that there is to rearrange. They will rearrange things that you didn’t even know you had. When living with the Mixer-Upper, do not be surprised to open the fridge one morning to find various containers balanced precariously on top of one another. Never expect to find your shampoo where you left it. Your lost cell phone is probably in the fridge. Or under the couch. Or in the couch.
Roommate Rating: 6 in the morning, 2 when you’re awake.

The Hermit is exactly what they sound like. They don’t like to leave the house, except maybe to go to class. In extreme cases, they don’t leave the house to go to class either. They don’t have many friends, and may not want many friends. Or maybe they only talk to their friends online. You’ll never know, because you’ll never talk to them about anything other than the utility bill.
Roommate Rating: 2, only because you’ll never be besties with your roommate.

The Socializer is perhaps one of the less predictable roommates to have, because you never know how drunk they will be when they get home. You will usually only see them two days a week. There may be a point during the term when you question whether or not they actually have class. You will be baffled as to how they are able to drink so many days in a row. The more irritating subtypes of The Socializer will wake you up constantly and you will have to take care of them into the wee hours of the morning. Every. Other. Day. It’s even worse if they’re loud when they…you know.
Roommate Rating: 8, but it’s a 9 if you factor in how irritable you will be without sleep.

The Utility Monster does not understand that you pay for utilities as you use them. Lights will always be left on. Water is left running, and you won’t have hot water when you need it. Usually, this forgetfulness translates to a general forgetfulness, so you can forget about your door ever being locked at night as well. And it doesn’t stop there. Internet bandwidth limit reached? Sixth day of the month. Fridge space for groceries? Don’t even try.
Roommate Rating: 5, until you get your first utility bill. Then it’s a constant 8.

This one is by far the worst. The name speaks for itself. Your food will disappear. Your soap will disappear. Your printer paper will disappear. Microwave? You didn’t bring a microwave – it’s your roommate’s microwave. It goes on like this. Some thieves are merely forgetful, and others are outright malevolent. Regardless, move out. Now. Before they steal you too (somehow).
Roommate Rating: Infinity and beyond.

Got bad college roommates? Tell us your horror story in the comments!

Featured photo courtesy of Global X via Flickr (CC BY 2.0).