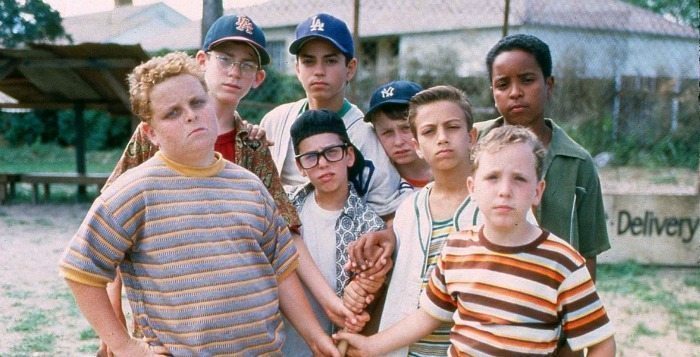 There are some movies that just never get old.  The Sandlot is one of those movies.  If you have never seen this masterful film, kindly excuse yourself from this article, watch it, realize what you’ve been missing your whole life, then get back to me.  For those of you thinking, it’s just some little kid baseball movie, you are so wrong.  Sure it is about some ragamuffins playing ball in an old sandlot, hence the name obviously, but it is so much more than that.  It is truly a coming of age classic.  It is witty, funny, and I’d go ahead and say flawless.  From teaching American kids how to make a S’mores to emphasizing the value of friendship, The Sandlot has many more life lessons to offer than how to play catch.  If you are in the mood for some classic 90s nostalgia, let’s take a little walk down memory lane and revel in the glory that is The Sandlot.

P.S., if you need a little refresher course, let’s start with the trailer:

“You’re killing me, Smalls” is a universal comeback to anything.  Somebody doesn’t know what you are talking about, does something stupid, asks something stupid, etc., you just hit them with this gem.  Either they will immediately get the reference and you will have a bonding experience, or they will once again have no idea what you are talking about.  If you encounter the latter, that person is not worth your time.

If there is one thing The Sandlot prepared me for, it is insult battles.  Those dudes knew how to fling insults like it was their job. “You wear your mama’s bra, and you like it.”  “You bob for apples in the toilet.” And obviously, if you called someone an L7 weenie, you really wanted to get your point across.  When you have wit like the boys of The Sandlot, you can make your enemy seem a fool.

It’s all fun and games until Babe Ruth’s ghost visits you in your dream and sits you down for some real-talk.  The real lesson of this movie is probably to teach you not to steal crap from your parents, but other than that, this little chat probably hammers home one of the movie’s main lessons.  If you really want to be famous, you have to be brave, and do what you know is right.  Don’t just be some temporary hero, do something legendary.

And if you didn’t have a childhood crush on Benny the Jet Rodriguez, its probably because you hadn’t had your eyes examined yet.

The lesson here is to not kiss somebody that doesn’t want to be kissed by you.  It’s not cool ever. It is sneaky, and creepy and just not okay.  Ignore the fact that these characters eventually get married and have a zillion kids, that isn’t the point. Don’t be a pervert or you will get kicked out of the pool.

The life lesson here is that if you want something, all you have to do is ask.  If the boys had just asked James Earl Jones for help, they wouldn’t have had to waste all that time and energy trying to pickle the beast.  Sometimes the best way to get help is by asking for it.

Honorable mentions: Don’t chew tobacco and then go on the tilt-o-whirl, don’t show up to a baseball game in a fishing hat, meat makes a great icepack, PF Flyers make you jump the highest, and fireworks are awesome.

My last piece of advice to you – Don’t watch The Sandlot 2, and if you have seen it, keep that to yourself.

What was your favorite The Sandlot moment?