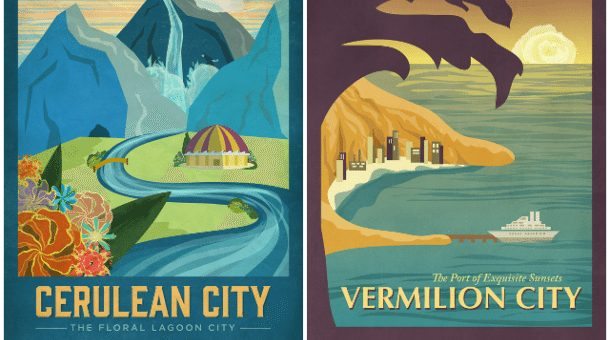 Pokémon, the beloved media franchise owned by Nintendo, is the second-most successful and lucrative video game-based media franchise in the world – only behind Nintendo’s Mario franchise. When Pokémon first made it big, the ’90s kids were all over it. From trading cards to video games, it is probably one of the most memorable aspects of gaming in the 1990s.

I was that girl – the girl who gave away her Pokémon cards to some random friend (insert face palm). Yes I know, not the smartest move in the world, but give me a break – I was in 2nd grade. Pokémon was the shiz for seven year olds. Honestly, it was the shiz for practically everyone when it first made it big.

Graphic designer and illustrator Alice Mongkongllite was apparently a huge fan, too. Based on the vintage Pokémon travel posters she designed, she was either a Pokémon obsessed individual or just someone who finds the illustrations interesting. Either way, her graphic designs are awesome. Her images of the world of Kanto take us back to our childhood when, of course, we wish we lived there. While we’re unsure of what her inspiration was, we’re willing to bet she was just as obsessed with Pokémon as the rest of the world. Unfortunately, not all of us are talented enough to be able to draw Kanto.

Don’t let these posters fool you – Alice Mongkongllite, a freelance illustrator and graphic designer from California, is a girl of many talents. Aside from illustrating these Pokémon posters, her other graphic designs are awesome! Some of our favorites include the Eyeglass Frames, Things In Weddings, Gavin DeGraw Discography, and her One Republic Poster. Check out her website to see more of her designs.

What do you think of these Pokémon-inspired travel posters?