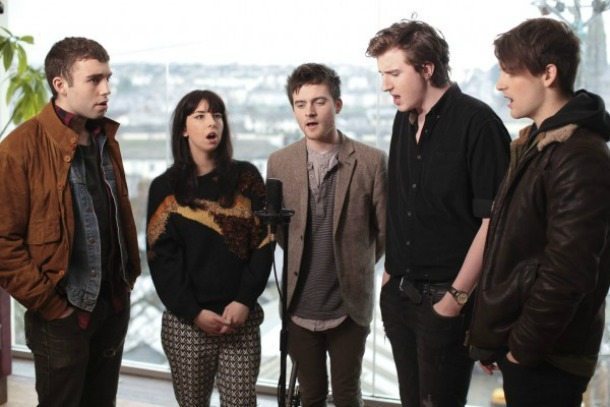 Are You Listening?: Little Green Cars

I recently wrote a preview of lesser-known acts that were going to be playing this year at Lollapalooza. One of those bands was Little Green Cars from Dublin, Ireland. Or as I have been referring to them lately: “my latest obsession.” I’ve been listening to their debut album Absolute Zero on repeat all summer. When I saw that they would be playing in New York City as part of MTV’s Artists to Watch Live series, I knew I had to be there. The Studio at Webster Hall holds only a few hundred people, and I knew that the opportunity to see them play in that intimate of a setting was not something I should pass up. And definitely not something they will be doing for much longer.

Little Green Cars is made up of five incredibly talented people. The harmonies the members are able to create are something to be rivaled and the energy that they bring to the stage, even though their music is relatively mellow, is unexpectedly powerful. They had command of the entire venue the moment they stepped on stage, although they did not seem aware of it. They started the set off quietly. It is hard to gain momentum with an audience when you start off with an acapella song but the second Little Green Cars started, the audience was hooked.

I have never once in my life experienced a silent venue. There is always the soft buzz of people singing along, ordering drinks, or chatting with friends. Twice that night though, Little Green Cars had the entire venue silenced. When they started the night with “Red” and when they ended the night with “The Consequences of Not Sleeping.” I was afraid to breathe because I didn’t want to disturb the peace. I didn’t want to miss a single note or moment. The concert started and ended the same way: with the venue absolutely floored. Silently absorbing the music.

Stevie Appleby, the band’s lead singer and guitar player, is unassuming. Whenever he stole glances at the audience you could tell that even though they had just played to a much larger crowd at Lollapalooza, he was amazed that anyone showed up to Webster Hall. He told stories of recording videos in his parents’ kitchen at four in the morning and it was obvious that he couldn’t believe he was playing anywhere but that kitchen. Even the other members looked like they were about to be woken up from an amazing dream at any moment.

Little Green Cars has a sound that has been likened to Mumford and Sons or Of Monsters and Men, but there is more to them than that. There is a definite folk sound, but with layers of other influences that are harder to pinpoint. With the five part harmonies and heartbreakingly nostalgic melodies, it is hard to really put a finger on their sound. Their ability to tell a complete story in one short song is something that some bands work for years to do, but it seems to come effortlessly to them. While watching them, it is obvious that they are a band that will grow and evolve, giving themselves longevity before they even really need it.

I was upset when the concert ended in a way that hasn’t happened to me in a while. I didn’t want the experience to end and had to force myself to walk out the door and onto the sidewalk. “Give it six months, you’ll be hearing their name everywhere,” I said to a few of my coworkers before I headed off to the show that night. After seeing them live, I give it two months. Tops.

So, if you haven’t started listening to Little Green Cars yet, let me make it easier on you. Just do yourself a favor and hit play.

My Love Took Me Down To The River To Silence Me

all photos except featured image by Erin Browne