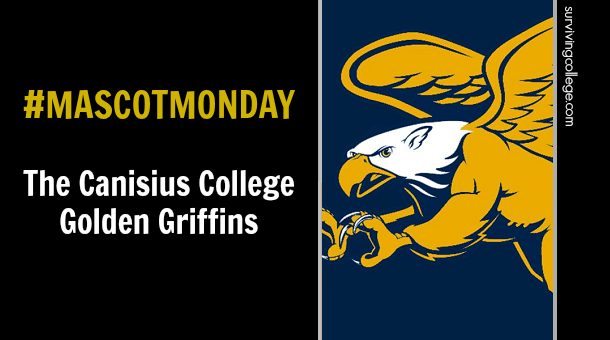 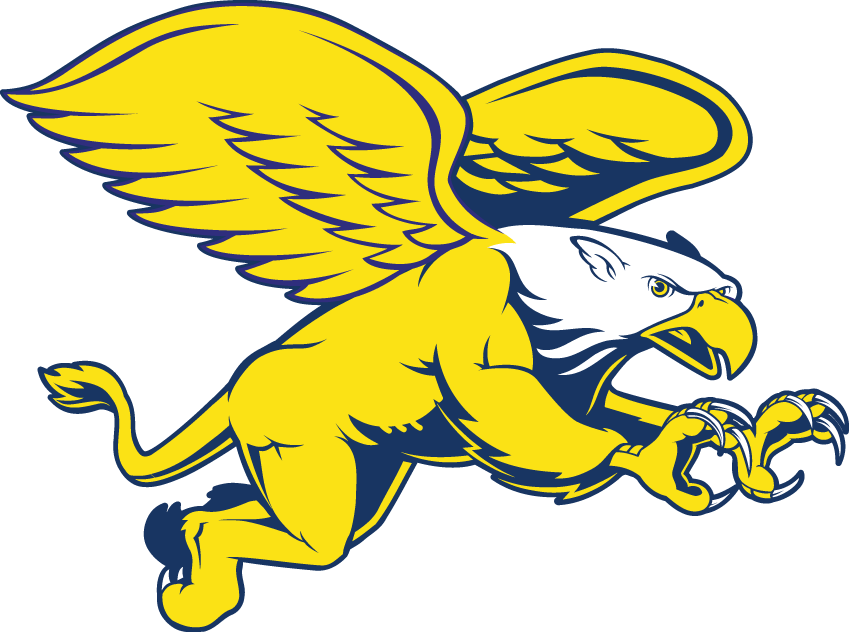 Here on Mascot Monday, we’re suckers for bizarre, strange, and just downright weird college mascots.  However, over the past couple weeks, we’ve strayed away from those mascots that make you scratch your head.  I think it’s about time we weird it up a bit, hence our featured mascot this week.  Hailing from Buffalo, New York, the Canisius Golden Griffins are one of the most unique mascots in all of college sports.  Sure your school could have an eagle or a lion as its mascot–that’s all well and good–but why limit yourself when you can just combine the two.  Well that’s exactly what they did with the Canisius Mascot.  Some will say it was crazy, everyone will say it was bold, whatever your thoughts may be, one thing is for sure, it works!

With a mascot like a Griffin, you would think Canisius would have some epic story about how the nickname came to be.  Not to undermine the rich history of this program, but unfortunately, that does not seem to be the case.  According to the university’s Wikipedia page, Canisius adopted the Griffin as its mascot in 1932 after Charles Brady wrote a story honoring Buffalo’s centennial anniversary.  In his story, Brady wrote about René-Robert La Salles’ Le Griffon, a 17th century ship La Salle set on to find a northwest passage to China–little history for you there.  Students and faculty alike fell in love with the name, and Canisius’ mascot was born.  Some of you may still be scratching your heads as to what a Griffin actually is.  According to Canisius’ athletic site, the griffin is a “mythical creature of supposed gigantic size that has the head, forelegs and wings of an eagle and the hindquarters, tail and ears of a lion”.  Excuse me while I catch my breath, but few things in this world are more terrifying than that. 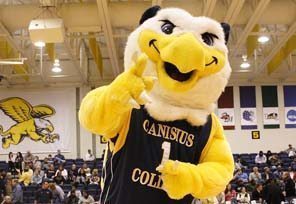 When I first looked at the Golden Griffin logo, I was immediately attracted to the head simply because it’s the only bit of white in a field of yellow.  Now, if I didn’t already know what a griffin is, I’m sure my reaction would have been something like this, “Oh, so their mascot is a…Oh My God!  Why is that eagle head attached to a lion’s body?”  I probably would have been scarred for life, but moving on.  You would think Canisius’ logo would look exceptionally mean and nasty.  But it doesn’t have to when your mascot is a lion and eagle’s love child, that’s scary enough.  The Griffin combines the most badass features of two incredible animals.  It has the sharp talons, speed, and agility of the bald eagle as well as the strength, ferocity, and courage of a lion.  Not to mention, it can fly!  How awesome is that? 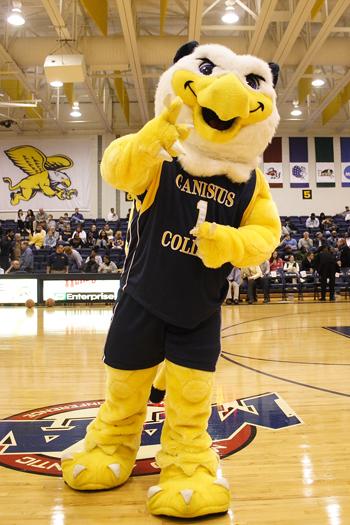 Canisius’ costume mascot is Petey the Griffin.  I hope I’m not the only one to think this, but as soon as I heard that name I immediately thought of Peter Griffin from Family Guy.  Don’t you just love that show?  Stay focused, Chris.

Petey is the perfect combination of playful and dangerous.  He looks all cuddly and cute, but at the same time, you know he could rip your head off with a single strike.  When you look at the costume, it almost looks like Petey is smirking with a look on his face that say, “You wanna mess with me?  Go ahead, give me your best shot”.  When in truth, I don’t think any in their right mind would cross Petey.

The best aspect of the Canisius College mascot is its originality.  In turn, the originality develops an identity for the athletics department as well as the university.  The Golden Griffin inspires school spirit amongst students, faculty, and the greater Buffalo area, something only great mascots can accomplish.

What do you think of the Canisius College Golden Griffins Mascot?