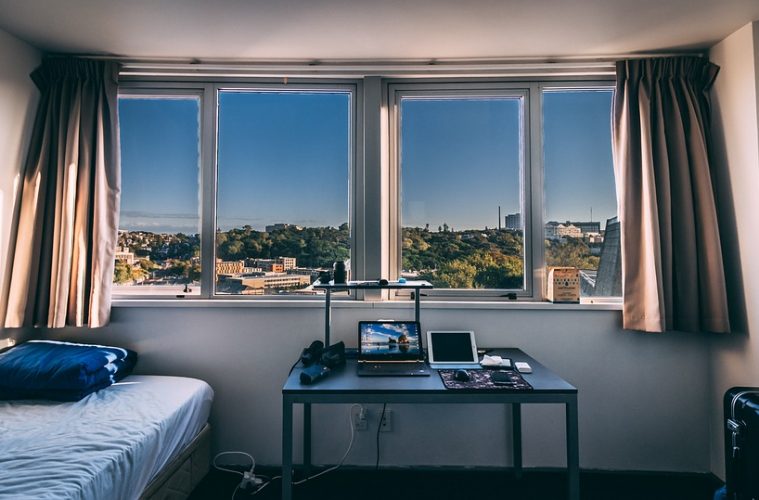 College Roommates: What to Talk About Before Move In Day

Chynna Mela is a senior journalism student at Temple University and an SC Campus Representative. She can usually be found planning her fall wedding to Harry Styles, attempting to become the female version of Perez Hilton, or eating peanut butter straight from the jar. Check out more posts from her here.

Ahhh, roommate assignments. You’ve just received a little piece of paper in the mail (or you checked online because the age of the Internet is a beautiful time to live), and you think you’ve scored the perfect roommate. He/she looks normal, clean, has all of his or her teeth and you can pronounce their name which prevents awkward introductions.

You can’t even stop yourself from calling all of your friends to let them know that you aren’t even nervous to move into a dorm room anymore because after seeing one small, blurry photo, her major and name you just KNOW that the two of you will get along like peanut butter and jelly. You can barely contain your emotions.

Well, I hate to burst your bubble, but before you throw a party in honor of your spectacular roommate assignment you may want to find out who she is first. I’m not saying she’s totally going to suck. You two may end up being best friends, standing next to each other at the alter, godparents, etc etc you know the story. BUT before move in date there are a few things that you should discuss with each other to avoid awkward questions, encounters and unexpected surprises. Here is a list of things you two should hash out prior to carrying box after box into a tiny room.

I’m sure you’ll skip all of this and instead go over 1. What color bedspread you’re bringing 2. That you’re both TOTALLY “neat freaks” and 3. Where you went to senior week. Don’t say I didn’t warn you.

This isn’t really rocket science. Unless you are a possessive, germaphobic, don’t-touch-my-stuff kind of person (good luck if you’re that person’s roommate), there is absolutely no reason to have double of everything. In case you haven’t seen a dorm room in real life: picture the ones in the movies and TV shows. Great, now cut that in half. You don’t have room for two mini-refrigerators. You don’t need two TVs (but make sure one of you is bringing one). Also make sure if you are bringing a large item you run it by the person you are sharing a room with. I knew a lot of people that muscled their twin beds into bunk beds and stuck a small couch in their room. Cool. However, before you bring the couch, run it by your roommate. They may not want to pull a Brennan and Dale for an entire year regardless of how much more room for activities you will have.

I’m not saying to exchange social security numbers, but it may be a good idea to have a general idea of who your roommate is before move in day. Especially if you are polar opposites. For example, if Janice Ian is moving in with Elle Woods it would probably be favorable that she give herself a few weeks to mentally prepare herself. Maybe try on a pink shirt (not buy it), use the word “like” every so often to get used to it, and maybe put “Barbie Girl” by Aqua in rotation in her favorite playlist. When a pool is absolutely freezing sometimes it is easier to stick a toe in, then a knee, then your stomach and then jump in. So ask what type of music they are into, hobbies, etc, but keep an open mind if they answer makes you apprehensive. College is about expanding your horizons. High School is over…leave your cliquey mentality behind.

What They’re Looking For

No, not in life or in a significant other. You barely know the person, try and wait a few weeks (or until your first drunk heart to heart) to go over the heavy stuff. I mean what they’re looking for in a roommate. For Pete’s sake don’t straight out ask them if they want to be best friends, but poke around a little. Maybe try casually saying “So what are your plans for the first weekend at school?”. If they say “IDK”, or “My older brother is having a party”, she wants to be an i-n-d-e-p-e-n-d-e-n-t woman and isn’t down to be best friends with her roommate. If she invites you along, or says “I’m not sure, but we should figure something out!” then she is open to the idea of friendship. This is important so you aren’t embarrassed when you try and make plans with her once you move in and you’re shot down.

What They’re Going To Do

Specifically: Are they a Division 1 athlete? Do they plan on going out every night? Are they a total theatre geek? It is important to know these three pieces of information because Division 1 athletes come with a busy schedule, a roster of built-in friends and a social calendar built by the school and her older teammates (games, practices, and uh, team “outings”). If a D1 athlete is your roommate, don’t expect to see much of her or plan on relying on her to be your best friend. Find out if they plan on going out every night so you can bring earplugs, prepare to wake up in the middle of the night to let her in when she forgets her key, and help her out when she’s on academic probation after the first semester.

Finally, know if she’s a theatre geek so you can change rooms ahead of time because nothing is more irritating than listening to someone recite lines hour after hour. Actually, there is something more annoying: listening to someone practice a musical instrument hour after hour. So avoid the band geek roommate if necessary. Just kidding. But it is important to have some sort of idea as to what type of student your roommate will be, and to also give them a heads up as to who you will be in college as well. If you have an 8AM every morning and you know you will be awake at 6AM on the dot let your roommate know. After all you live in a 2×4 and the alarm clock will probably be waking her up too.

While it is important to go over these things remember a few precious rules when doing so:

1. Don’t seem overly eager to ask. For example: Don’t call her and say “Hello, would you mind answering a few questions?” and then fire off a list of personals faster than the lightning round of Family Feud. Just start a general conversation and slip these topics in there.
2. Use the internet. You can stalk out most of this information. Yes, I am 100% serious. Facebook, Instagram, Twitter, Google search…2014 is a beautiful thing.
3. Regardless of how well you think you know someone before you move in with them you never know someone until you actually live with them. Go in with an open mind.
4. If you are sitting at your computer laughing at this post saying “Ha! I already know all of this because my roommate is my best friend from high school!”…Just don’t. I’m laughing at you. Go ahead and call housing and see if you can still switch. It’s time to make new friends and I guarantee you two will be fighting within two weeks.

What are you and your roommate talking about?