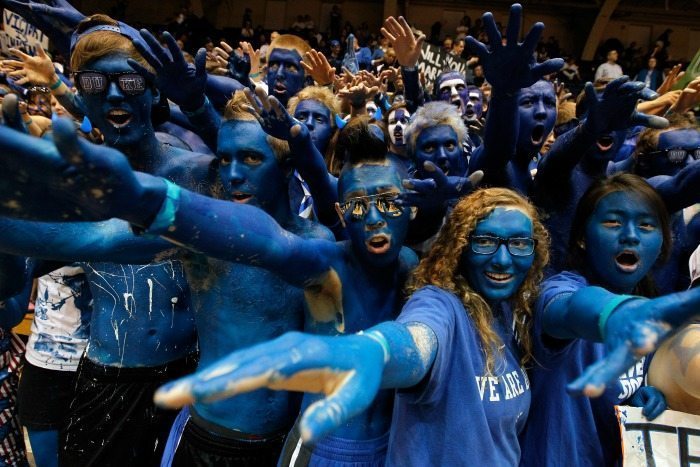 I think we can all agree that it takes a lot to run a successful college basketball program.  First of all, you’ve got to have the talent in order to compete with the best teams in the country.  Now, how do you get that nation’s best high school players to come to your school?  Recruiting, of course.  And what do you think it takes to recruit at a high level year in and year out?  Great coaches.  Just so we’re clear, I’m not trying to debate this but you can’t tell me they’re aren’t a few other aspects that may contribute. 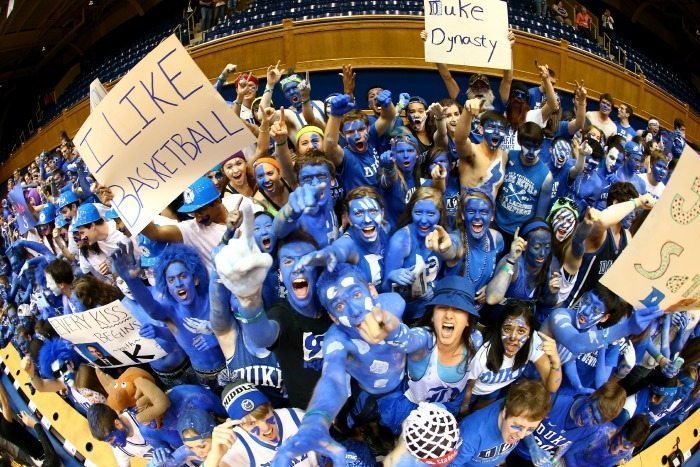 If there’s one thing that comes to mind when I think about the Cameron Crazies, it’s the color blue.  A little strange perhaps, but hear me out.  Every game, hundreds of Duke students paint themselves head to toe in Duke Blue.  Just look at any photo taken at a Duke basketball game and you’ll know exactly what I’m talking about.  They all look like a bunch of smurfs!  And that’s not necessarily a bad thing.  If anything, it demonstrates the Crazies’ commitment and loyalty to their team.  I mean you deserve a hell of a lot of credit if you paint your entire body blue in preparation for every home game.

But what I find most impressive about the Cameron Crazies is the undying passion and dedication they have for Duke basketball.  I mean these kids sometimes camp out at Krzyzewskiville just to make sure they get tickets for the upcoming game.  Just last week, students were camping out as early as Monday to get tickets for the Carolina game.  I’m sorry but you can’t call yourself a true fan until you camp out for tickets.  This has become a tradition at Duke and is almost seen as a rite of passage for any Blue Devils fan.  If this doesn’t exemplify commitment then I don’t know what does and you are just way to difficult to impress.

Clearly, the Crazies are not lacking in either loyalty or passion.  But as if that wasn’t enough, they’re also one of the most creative student sections in the sport.  Now, I’m a firm believer and supporter of heckling at sporting events–ask any of my friends.  And I’d be lying to you if I said I’ve never gotten into a heated exchange with other students or even parents at one of my alma mater’s games.  Just don’t ask.  But I have to say the Cameron Crazies take it to a whole new level.  They hand out cheat sheets to the students before every game and I’m willing to bet some of the information is rather personal.  And they’re not afraid to take the gloves off.

After being criticized by The Washington Post, the Cameron Crazies changed the placard in Cameron Indoor Stadium that read, “If you can’t go to college, go to State,” and added “If you can’t go to State, write for The Washington Post”.  As I’m sure we’re all aware of Duke is a fantastic school and Crazies are not hesitant to remind you.  One time, while losing to rival NC State, the Crazies began chanting, “That’s alright, that’s okay!  You will work for us one day!”.  Even when their team is losing (granted doesn’t happen all that often, especially at home) the Crazies can always look on the bright side. 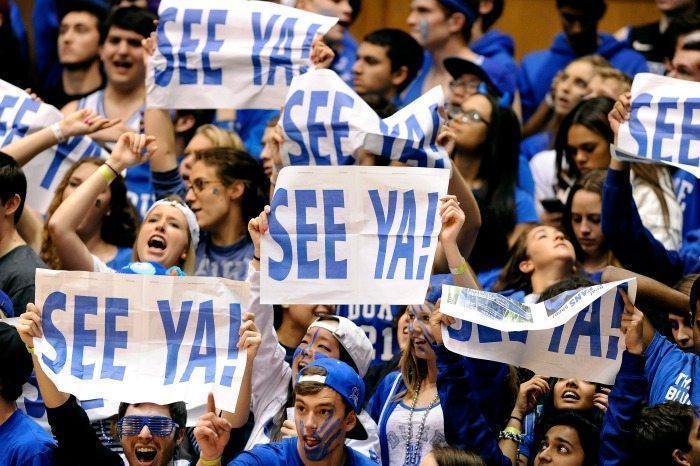 There’s no doubt that Duke provides the most unique and exciting gameday experience in all of college basketball.  Thanks in large part to the passion of the Cameron Crazies, the spirit and tradition of Duke basketball is unlike any other.  Often times they’re copied, but they are never matched.  And even though I’ve been a Maryland Terrapin fan for all my life and have despised Duke basketball for as long as I can remember, I would kill for the opportunity to take in a Duke basketball game at Cameron Indoor Stadium and stand amongst the Crazies — though I wish you the best of luck in getting me to wear Duke Blue.

What do you think of the Cameron Crazies?