Did You Know? Saint Joseph’s Hawk That Won’t Stop

Have any of you heard of Saint Joseph’s University before?  In case you’re not familiar, it’s a private school based out of Philadelphia and home to one of the most unique college basketball traditions in the country.  Now St. Joe’s iconic tradition may not be a chant or some pre-game ritual but I can assure you that it’s unlike any other you’ve seen before.  And as I’m sure you’d expect, it’s pretty awesome.  Would I ever steer you wrong?

You may or may not be familiar with St. Joe’s mascot, the Hawk.  But in case you haven’t had the pleasure, the Hawk is an awesome mascot and is often times the first thing you think of when you hear Saint Joseph’s; I know I do at least.  Surprisingly enough, the tradition at St. Joe’s is actually pretty basic.  And it only involves one person — the mascot — and yet,  it’s one of the most iconic traditions in all of college hoops.  During every St. Joe’s basketball game, the Hawk can be seen in constant motion by flapping its wings from the opening tip to the final seconds.  I understand that isn’t particularly the most exciting tradition in the world but what makes it so special is that the Hawk never stops.  The Hawk truly takes the university’s logo, “The Hawk Will Never Die”, to a whole new level.  The Hawk even flaps its wings during the National Anthem.  Now that is commitment!

Ever since the Hawk began flapping its wings nearly 60 years ago it’s become one of the highlights of every Saint Joseph’s basketball game.  It’s something that St. Joe’s students have come to expect and even look forward to every time they see the Hawks take the court.  When you think about it, this isn’t just a cool college basketball tradition, it’s also a pretty good workout.  I don’t know about you, but I can’t imagine flapping my arms for two hours straight–halftime included.  I bet you thought that you’d earn a short break after the first half.  Nope, St. Joe’s doesn’t roll like that.  You’ve got to be dedicated and passionate in order to step into that hawk costume.

As I said earlier, the Hawk never stops flapping its wings.  Trust me, I’m not lying to you.  A few years ago, ESPN had the idea to use a “flap-o-meter” during a nationally televised game to see just how much work it takes to be the Saint Joseph’s Hawk.  ESPN estimated that the Hawk flaps its wings 3,500 times during a regulation game.  I can’t even completely wrap my head around that.  I get tired from flapping my arms for even just a few seconds.  But when you really think about it, all the work may be worth it in the end.  It turns out that the student who is chosen as the new mascot is given a full scholarship for the entire time that they serve as the Hawk.  That’s a pretty sweet incentive if you ask me and quite honestly may be worth all the flapping. 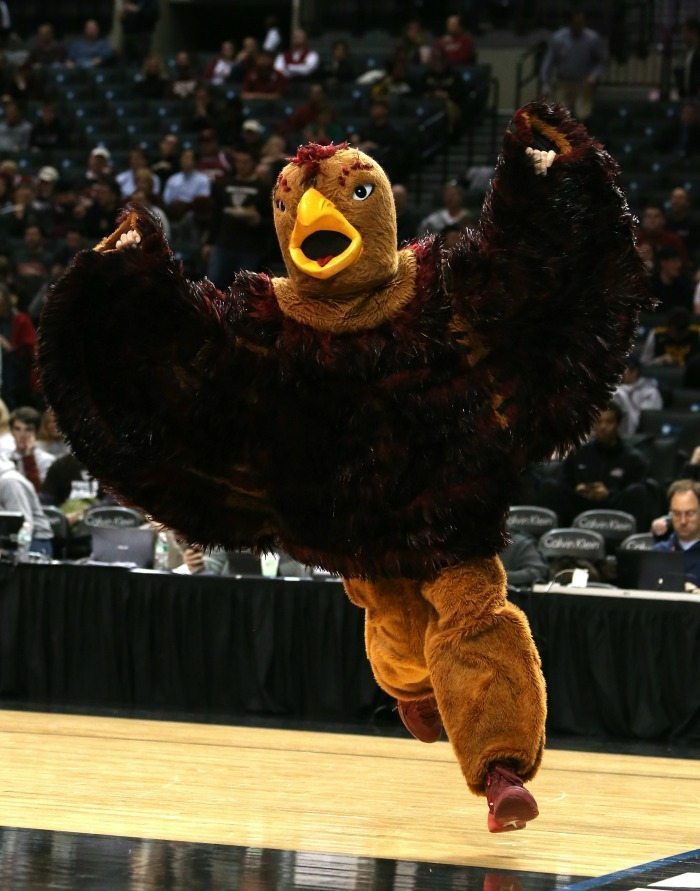 What I love most about this tradition is that it ties into the image of the university and its athletics program.  I’ve always thought of Saint Joseph’s as a scrappy, hard-working program and I feel as though this tradition perfectly represents that.  What more could you ask for?  It speaks to the commitment, character and make up of not only the athletics program but the university as well.  Just in case you still question how awesome this tradition truly is, it was named the “Best College Basketball Tradition” by NCAA.com just this year.  You really can’t argue with that.  If the NCAA thinks so, it must be legit.  And for what it’s worth, the passion and endurance displayed by the Hawk during this one-of-a-kind college tradition is proof that “The Hawk Will Never Die!”