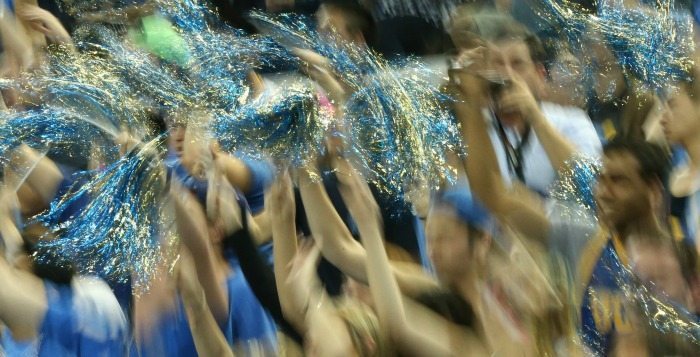 Did You Know? UCLA’s “Frisbee” Cheer

If you ask me, passion and spirit dictate tradition.  In fact, tradition doesn’t mean a whole lot if you’re lacking a spirited fan base.  And if there’s one school in the country that knows a thing or two about spirit it’s UCLA.  No matter how they’re football or basketball team may be doing, Bruins fans are always there to support their teams, win or lose.

While UCLA’s players may change every few years, the spirit of the university and its student body carries on year after year.  And it’s that spirit that guides and shapes UCLA tradition.  Not surprisingly, UCLA has some of the coolest and most unique traditions in the country.  But if I had to pick a favorite I’d definitely go with the Bruins’ “Frisbee” Cheer.

It all started back in the 1970s as the UCLA basketball program was in the middle of a downfall.  With the retirement of legendary Bruins’ coach John Wooden school spirit and attendance witnessed a dramatic decline as the university was looking for anything to create some excitement.  And what better way to improve school spirit around campus than with a new cheer?  Well that’s exactly what the doctor ordered and the doctor was Lawrence H. “Frisbee” Davis.

You see, Davis was a huge Bruins fan.  He was easily one of UCLA’s biggest supporters and attended nearly every Bruins’ sporting event.  One day, while he was at a water polo game he couldn’t help but notice how the players in the water communicated with one another through a call-and-response system.  And then it all clicked.  Davis took what he picked up at that water polo game and tweaked it a little bit to make it more appropriate for a basketball game.

The cheer begins with one Bruins fan yelling the question, “Is this a basketball?” after which the rest of the fans answer in unison, “Yes, that’s a basketball”.  The chant continues with a series of questions naming the court along with the winning and losing team.  The chant ends with the entire student section clapping at an increasing rate as they chant, “U-C-L-A.  UCLA.  Fight!  Fight!  Fight!”.  The chant has since brought a sense of pride and passion back to UCLA athletics and has re-energized its fan base.  The cheer has even been featured during an ESPN College Gameday commercial.

What I love most about this great college tradition is that it originally started between “Frisbee” and his buddies but has transformed into a symbol of the Bruins’ athletics program as well as the university.  And the timing of the chant could not have been any better.  When the athletics program was experiencing one the lowest moments in its history, the “Frisbee” chant uplifted everyone’s spirits and got the students excited about Bruins athletics.

Although I’ve never been to Pauley Pavilion, I can only imagine how crazy it must get during the famous “Frisbee” chant.  I really am a fan of its simplicity and how the fans aren’t afraid to let the opposing team know who’s going to come out the winner.  But it’s much more than just a cheer, it’s one of the best traditions in college basketball.  In many cases, it’s become a focal point of the entire gameday experience and has given UCLA a revived spirit and delivered a sense of identity to a program that had lost its way.  But in case you’ve never seen the “Frisbee” cheer, check it out below.