FreeFest or Bust: My Musical Journey to Maryland

I am one of those people that tries to plan my travels around music. Traveling at any time is great, don’t get me wrong, but it is even better if concerts are involved, in my opinion. So when I found out that I would be able to attend Virgin Mobile FreeFest in Columbia, Maryland this year, I was stoked. Not only did I get to go to a state I had never been to before, I got to go to a music festival. With tons of my favorite bands. For free.

Is there a better way to spend the last day of Summer? Not a chance.

So on the morning of Saturday September 21st, the last day of summer, I woke up at 5am to make my way to Maryland. If you are unfamiliar with FreeFest, it is an event that takes place annually in Columbia, and the tickets are free. People are encouraged to make donations (and some tickets can be “purchased” by donating) and all the proceeds go to helping homeless youth. It’s a pretty cool festival and idea and a great cause. I caught the Muzik Bus from Manhattan with other festival goers and hit the road. I did my best to sleep on the bus, but let’s be real, who can comfortably sleep on a bus? Children maybe. Maybe gymnasts since they are really flexible. I quit gymnastics when I was about nine though, so I had a hard time finding a comfortable position to sleep in that didn’t make me feel like my neck was breaking. Eventually I just downed the coffee I had brought with me, and turned up the volume on my iPod and watched New Jersey race by me.

To give you a general sense of what that journey was like, please take a look at this “selfie” below. Note the sleeping person behind me, who is uncomfortable while sleeping on a bus. 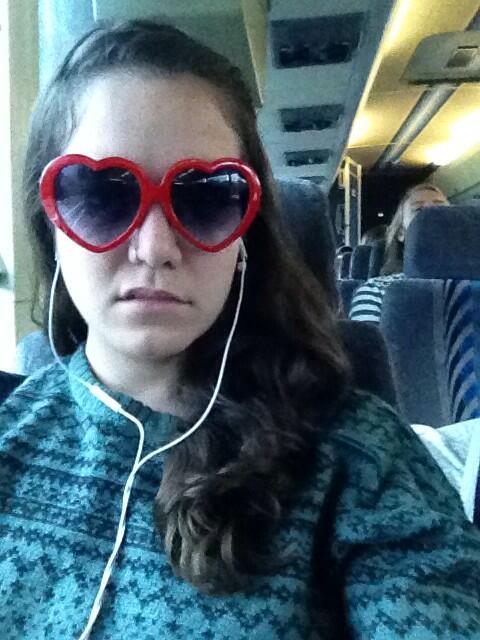 We got to the festival grounds just as doors opened at 11am. I stretched quickly, pushed my heart shaped sunglasses down onto my face, and made my way to the press tent to check in. After getting the lay of the land, I wandered over to the main stage and found a seat for the first band, New York’s The Knocks.

The Knocks were a great way to start the day. The dance beats were infectious, but not too over the top that it was overwhelming for noon on a Saturday. After waking up so early and sitting on a bus for so long, it was a nice boost of energy, and it definitely carried me through the rest of the day. However, it was the next band that I was really excited for. And I mean really excited for. Perhaps too excited.

One of my favorite bands from the past year is Little Green Cars from Dublin, Ireland. I have written about this band a lot. And I could write about them a million times over and probably not feel like I have expressed adequately enough how amazing they really are. So when I saw that they were playing FreeFest I knew that I had to go, and I had to see them. FreeFest does this thing where they clear out the pit for the main stage between every band, giving everyone an opportunity to see their favorites up close if they are willing to put in the time to wait.

So there I was, as close as I could get to Little Green Cars without actually sitting at their feet like a small child (which, let’s be honest, I would have done had they allowed me to) surrounded by people who very enthusiastically were asking who the band sound checking was. As soon as they broke out their five part harmonies though, everyone was sold. And rightfully so. When they took the stage for real a few minutes later, they quickly won over the crowd. It’s hard though, not to be won over by a group of incredibly talented Irish musicians in their early twenties. That is a recipe for charm. Add frontman Stevie Appleby telling an endearing story about the time he was in a nativity play as a child, and the only female Faye O’Rourke’s powerhouse voice, over powering four male voices and you have a cocktail for a good time.

After Little Green Cars finished, I raced to the other stage to catch Scottish synthpop band CHVRCHES, who I have also grown obsessed with in the last six months. Their debut album The Bones of What You Believe drops this week, and I seriously recommend it. Lauren Mayberry’s voice if refreshing against the synth lines that will make you want to dance, and the lyrics are surprisingly deep for melodies that are so light.

After CHVRCHES ended is when the rain started. And it did not stop for the rest of the day. Everything turned to mud, literally everything. Rain is pretty much a festival staple though. Tip: if you go to a festival, pack a poncho if not a rain coat and umbrella. It will rain. You will get wet. Plan accordingly. Do not be only of the people that spends the rest of the day miserable because they were not prepared. I saw too many of those people on Saturday.

I took a food break after CHVRCHES and decided to try to get back into the pit for MGMT just to get out of the rain. It worked, and I ended up being right up front. MGMT are one of those nostalgia bands for me, and even though they have released two albums since their debut Oracular Spectacular (with their third album even coming out last week) it is all about “Time to Pretend” and “Electric Feel” for me. Before MGMT started though, I was able to have a quick but lovely chat with Adam O’Regan and Donagh Seaver O’Leary, guitarist and bassist of Little Green Cars, respectively. 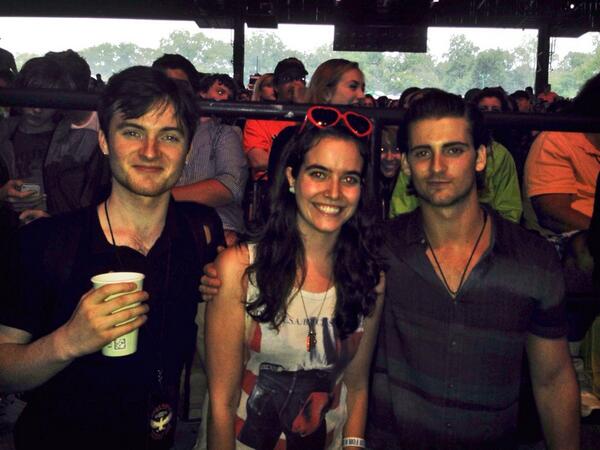 Shout out to Adam and Donagh for being so nice as I rambled and stuttered when I usually keep my cool in those situations. Seriously, usually so professional, but that conversation was definitely a flustered one. I danced away my embarrassment (or in all actuality probably just added to it) when MGMT finally came on though. They played a good set. Playing the classics from each album, minus Kids, paired with some psychedelic backdrops that didn’t really make sense. But when has MGMT really ever made sense?

Once MGMT wrapped up, it was back to the rain for another few hours before Vampire Weekend. Another one of my favorite bands. I got to hear the entirety of  The Avett Brothers’ set while waiting to get into the pit for Vampire Weekend, which was a nice soundtrack to the evening.

Vampire Weekend put out one of my favorite albums this year, Modern Vampires of The City, so I couldn’t wait to see them in such a unique setting. Like MGMT, they played a rounded set filled with the classics from their first two albums and a healthy dose of new songs. I didn’t think there could be something more charming than the members of LGC, but then I saw Vampire Weekend bassist Chris Baio dance, and I realized I was wrong.

Despite the weather and the long day, the energy was still high as people packed in to see Vampire Weekend. Lead singer Ezra Koenig graciously thanked the crowd for being so respectful before ending the night with the traditional VW “goodbye” song: “Walcott.”

After their set, I made my way back to the bus so I could head back home to New York. I arrived back in Brooklyn at 4:30am, clocking my trip in at just under 24 straight hours. And even though I was cold, and wet, and sore and tired, it was worth it. Because like I said: any time I get to travel, and music is involved, is my idea of the perfect trip.

Did you go to FreeFest?

All photos via Virgin Mobile unless otherwise noted