How To Play “The Hunger Games” Drinking Game

The Hunger Games: Catching Fire premieres at midnight tonight, and everyone’s talking about it. Everyone. 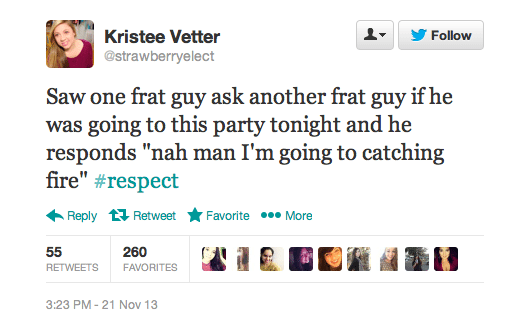 Yep, even frat guys. I told you, everyone is talking about it.

Every time a trailer comes on TV it’s almost all I can do to keep from crying/hyperventilating/etc. and I get chills. I am so excited. And I know I’m not the only one, so don’t judge me, okay? What’s not to be excited about though, really? The plot is thickening, Jennifer Lawrence is perfection, and we’ve only been waiting for it to come out for months and months. But anyway, that’s not what I’m here to tell you about.

Actually, I’m here to teach you how to play a drinking game to help you celebrate the Catching Fire debut! So, without further adieu, here’s how to play the Hunger Games drinking game (modified from this one on DrinkWiki)

One suggestion though: don’t play before the movie, or you might be too tipsy to pay attention!

Bring the group away from the cornucopia and set up a game of Kings by spreading the remaining cards in a circle to represent the arena. (The cards not used as district cards will be addressed later.)

Each person goes through and flips over a card. If a district card is drawn, the person who flipped it, and the person with the matching card, must battle.

Someone counts down from ten and then releases the two competitors to cornucopia. They run over, and chug a beer or whatever drink is provided. The loser is killed and thus out of the game. Example: Tommy is in District One and he pulls a red 4. The person in district 4 with the red card has to now race Tommy to the Cornucopia and finish his/her drink faster or else he/she dies.

If it is early in a game and you pull a card that is not a district card, shuffle it back in to the pile.

If you pull any card from your district (person with red 4 draws the red 4), you may pick who you battle against or choose to skip. If you get picked, your district partner may volunteer  as tribute and take your place in the games, or offer a sacrifice (Example: I’ll give you my shirt instead.) No one drinks if a sacrifice is made.

Whoever wins the battle may act as “GameMaker” and create a rule for one of the non district cards. The rule is to be respected for the rest of the games. Example: Tommy won the battle. Tommy’s rule is “If you pull a king, you must finish the drink in your hand.”

The game continues as such, and the last tribute standing is the winner of The Hunger Games!

Will you be seeing Catching Fire tonight?