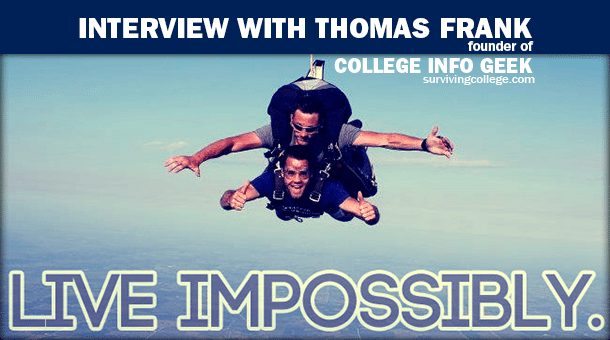 You may have noticed already, but we’re beginning a new tradition of interviewing awesome, different, fun college students and recent grads here at CampusRiot. One such person is Thomas Frank, a good friend and fellow college blogger. Tom is the founder, head geek, and face of popular college blog, College Info Geek. Tom was kind enough to take the time to give us this epic interview, giving us his opinion about personal branding as well as some of his biggest life lessons from college.

PN: Tell us a little about yourself. 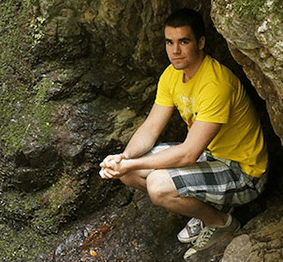 TF: I asked this question to Noah Kagan (of AppSumo), and to paraphrase him, “Yeah, just give us everything about you in like, 30 seconds.” Ok, I’ll give it a shot 🙂

I’m a student at Iowa State University and I run a college blog. I think it’s a pretty good one. I’m also a web developer and a huge WordPress nerd. When I’m not working, I’m either lifting, gaming, watching One Piece, or doing random stuff with friend (like jumping out of airplanes).

One of my core principles is freedom when it comes to work; it’s my goal to either work for myself or find a job at a startup where I can be a very big influence on the company and work closely with everyone in it. This is what has driven a lot of what I’ve done in college.

PN: You’re starting your senior year at Iowa State. Do you have any big plans for your final year of college?

TF: I do have some big plans, actually.

First and foremost, I have a bunch of stuff I want to get done on College Info Geek before I graduate. I’ve got some new features coming soon, including the Personal Branding Toolbox for my email subscribers.

I also want to become a pro WordPress developer and get my own premium-level theme built by the end of the year. Right now I’m working with the Bones Framework and learning LESS and JQuery. If you don’t know what any of that means, that’s totally fine. Just know my theme’s gonna kick ass and be tailored for bloggers. 🙂

Besides those two things, I want to figure out what to do once I graduate! I believe I’ll be moving to Minneapolis with friends, so this year I want to discover as much as I can about the startup community there and start making connections.

Oh, and I want to keep learning Japanese.

PN: You traveled a ton this summer. (Bitten by the travel bug?) If you could drop everything and move to any city on the planet, what city would it be?

TF: How long would I have to stay. Honestly, I very much can drop everything and move to any city on the planet once I graduate in May. I’m choosing Minneapolis because my friends are going there, I can get super cheap rent, and it has the best airport in the world.

PN: You made it your goal coming into college to graduate without student debt. What is your opinion about the student debt crisis that’s been making the news these past few months?

However, it’s not like college is completely unaffordable for most students.

As someone who worked 20-30 hours a week throughout high school (which was very manageable even with homework), I can confidently say that I probably could have paid for most of my college expenses if I didn’t spend 80% of every dollar I made on food and random stuff in high school.

So the combination of saving money diligently and choosing to attend a less expensive university (tuition for me is about $6,000 a year) can make college a lot more affordable. As a taxpayer, I am ok with helping other students through federal loan programs; however, when those programs become strained, I believe personal responsibility is the best solution.

PN: Tell us a little about the college blog you run, College Info Geek. What makes it different from other college blogs?

TF: I actually never planned on running my own blog! After my freshman year ended, I noticed that HackCollege was taking applications for new writers. As a huge fan of that blog, I applied and sent in a guest post. Sadly, I didn’t make the cut.

So, to exact my vengeance (and to have something to do with that guest post), I decided to start my own blog. Initially, my goals were to just share my college tips and have a writing portfolio. However, the scope of things has gotten a big bigger since then.

Another difference is that, except for on rare occasions, I’m the only author. Most well-known college blogs have a large staff of writers (some have hundreds). Mine is pretty much the only big one that’s mainly single author. This has given me the ability to brand the blog with my personality, which means College Info Geek = Thomas Frank. It’s part of my brand. In this way, my blog’s format and feel is a lot more similar to blogs like NerdFitness, Get Busy Living, and Exile Lifestyle than it is to HackCollege, Uloop, or even CampusRiot.

PN: What were some of the most challenging/gratifying parts of running your own blog?

TF: The most challenging parts of running my own blog were getting initial traffic and finding the motivation to keep going. When I started blogging, almost no one was reading my content. Nobody ever commented, and the only person sharing my stuff was me. It took quite a long time before I started gaining a following.

Since I was blogging for myself, I had no deadlines and no one who would yell at me for being lazy. I have to find my own motivation to work – though it’s a lot easier these days since the blog is bigger and I have bigger expectations for myself.

However, these challenges are so worth it. I’m so glad that I didn’t get hired at HackCollege; building my own site and brand has been much more rewarding than being a part of a staff would have been. I’ve been able to create a name for myself in this niche, and I’ve still had to opportunity to work with everyone I would have worked with had I been hired. Networking is super easy when you’re a blogger, so there’s no downside to being on my own.

By far the most gratifying part of running this blog, though, is being told by other students that I’ve helped them. It’s amazing to hear from someone that an article I wrote helped them get through a problem or become more successful. That feeling is absolutely amazing.

PN: What were the most exciting opportunities you scored from being a blogger?

TF: I’ve been able to travel for free! Working with Adobe enabled me to travel to both Los Angeles and San Francisco, both of which are absolutely awesome.

Additionally, I’m able to make a pretty decent income from blogging. This is something that takes a long time and a lot of hard work to establish, but now that I have it, it’s really nice.

PN: Do you have any plans for yourself once you graduate from college? What about College Info Geek?

TF: As I said earlier, I’ll probably be moving to Minneapolis after graduation and living with some of my friends. The plan right now is to get connected with the startup scene up there and find opportunities! Through running my blog, I’ve gained skills as a writer, developer, and marketer – so I think I’ll be able to find something 🙂

College Info Geek will definitely remain active, though I’m not quite sure how exactly I’ll go about running it. Once I graduate, I may decide to expand and hire some awesome student writers. Or I’ll keep it solo for a while. I’ll guess you’ll have to find out!

PN: If you could describe your personal brand in 5 words or less, what would it be? What makes you, you?

TF: “Anime nerd who writes well?” Or maybe, “Sexiest man who ever existed.”

Honestly, I’m not sure how to put it in 5 words. I run one of the best college blogs there is, I’m a pretty good coder and designer, and I love both nerdy stuff and lifehack-ish stuff.

PN: What’s the value in a college student’s creating his/her own personal brand?

TF: A personal brand is immensely valuable. Your brand is a representation of your expertise and experience. It tells other people who you are and what you’re a badass at doing.

Without a brand, you’re just another face with a resume. Your brand can immediately tell someone that you’re the perfect candidate for the job they have open; without one, you have to do a lot more work to get to where you want to be.

PN: What advice do you have for students looking to create their own personal brand?

TF: First and foremost, define specific goals for what you want to do with your life. Hopefully this is related to your major, but if not, that’s fine too! To be honest, my major isn’t to closely related to what I want to do – it’s more rooted in enterprise IT, which isn’t my cup of tea.

Then, start networking with people in that field or who you look up to. Use Twitter to start relationships and talk to like-minded people.

Use technology to be everywhere. Build a personal website and make it your online base of operations. Create a portfolio of your best work that everyone can see. Learn how to use your social network accounts to your benefit.

PN: Can you tell us a little bit about the personal branding kit that you’re putting together for College Info Geek?

TF: Basically, after I wrote my personal branding primer and my website building guide, I wanted to start creating some more in-depth resources for building a personal brand. So I decided to create a kit for my email subscribers, as an incentive for signing up and getting involved with College Info Geek.

The kit will include in-depth guides and other resources that will help students build their personal brands. Beyond that, I won’t say much – you’ll just have to find out when it gets launched.

TF: My Impossible List is a list of my current goals that I’m actively working towards completing. Bucket lists aren’t active enough; they’re often just lists of things people wish they could do. I decided to use Joel Runyon’s Impossible List concept instead, because it’s active.

PN: What are the 3 things you own that you can’t survive college without?

TF: First and foremost is my computer – it’s absolutely essential for what I do. However, I use a lot of cloud-based apps, so I probably could survive by using school computers if I had to. Still, having my own is a big help.

Second is my friends, because they’re what keeps me happy. (If you guys are reading this, I think you’re cute.) This includes my online friends too.

Third would be DropBox. Seriously, it’s saved my ass more times than I can count.

PN: What are the biggest life lessons you learned while in college?

TF: I’ve learned a lot, but a couple that always stick out to me are:

PN: Any last words of advice for the CampusRiot audience?

TF: Seriously, if you read this far, you’re awesome. Your reward is a picture of Abe Lincoln riding a bear.

Seriously, if you did make it all the way to the end, you get a virtual cookie.