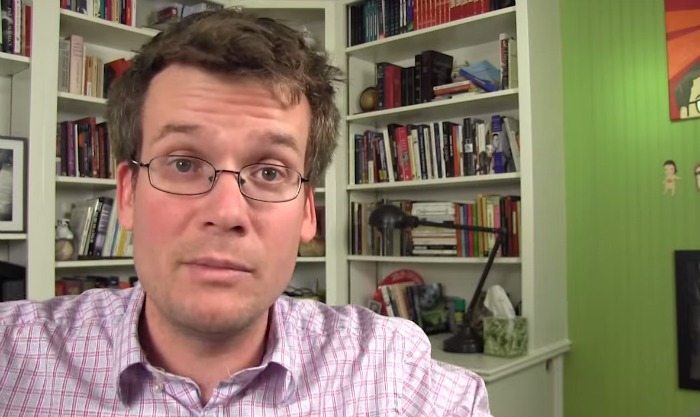 Time Magazine recently unveiled its list of this year’s 100 Most Influential People, honoring everybody from leaders like John Kerry to celebrities like Beyoncé. To absolutely nobody’s surprise, author John Green managed to snag a spot on the prestigious list.  Next to his photo is a small blurb written by Shailene Woodley, the star of the movie version of Green’s popular book, “The Fault in Our Stars”. After working closely with him for several months, her love and appreciation of the man could not be described as anything other than genuine.

As a young adult herself, she has personally felt the full impact of his words and actions, filling her with an unquestionable affection for him. “John hears the voices of teenagers,” she writes. “He acknowledges the intelligence and vulnerability that stem from those beautiful years when we are, for the first time, discovering the world and ourselves outside of our familial stories.” There are so many reasons to love John Green and his books are only one of them. So, without further ado, here are 5 reasons why John Green is one of the most awesome and influential men alive.

1. He understands the youth

There is a reason why the young adult crowd is obsessed with John Green and it is because he understands them. Many adult writers forget how difficult and confusing the years spanning adolescence can be and lose the ability to appeal to that audience without coming off as condescending. But not John Green. He understands that growing up is not easy, a fact that his stories clearly illustrate.

2. He’s the co-founder of vlogbrothers

Not only is John Green a phenomenal writer, he is also a wildly hilarious and intelligent YouTuber. Together with his brother Hank Green, he runs a channel called vlogbrothers. Their videos are entertaining, enriching, and overall fantastic and after watching one, it’s impossible to not fall in love with the Greens.

VidCon is an annual festival organized and held by the Green Brothers. It’s basically a giant event in which members of the online community, whether they be vloggers, film makers, creators, or simply appreciators of the whole virtual world of entertainment,  gather to talk, laugh, and exchange ideas.  It is a safe environment for creative youths from around the world to socialize and make connections without fear of judgement or rejection. It is the embodiment of everything John Green stands for: communication, love, fun, and understanding.

John Green is a full-fledged nerd and not in the ha-ha-look-at-me-I’m-so-cute-I’m-a-nerd type of way. No, he is actually a nerd. And he stands for all the lonely and marginalized nerds around the world. I mean, his followers on YouTube are known as the Nerdfighters, after all. He is the captain of the underdogs and he obtained that title naturally. He is not looking for recognition or popularity or acceptance. He is the one who accepts all those who aren’t accepted. And that makes him pretty freakin’ awesome if you ask us.

5. He cares about you

Look, this is basically the number one reason why you should love John Green. He gives a damn. He cares about you and your life and your emotions. He is not just trying to monopolize off of what is popular or trending at the moment. No, he legitimately understands you and that’s what makes him the greatest man ever. His books might not be your thing and eh sappy movies might not be up your alley but that does not mean you should write him off as nothing but a typical young adult novel writer. He is so much more. His whole is greater than the sum of his parts. Read his words, listen to his speeches, embrace his message. He’s here for you and that’s why he more than deserves his spot on Time’s 100 list.