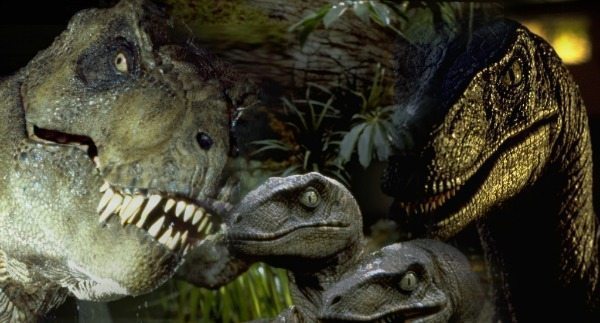 So, you can revisit Jurrassic Park in 3D this weekend. That’s pretty cool. We have a long list of movies that we’d like to see brought back on the big screen, like a lot of those Syfy Channel movies. We don’t even need to see Komodo vs. Cobra or Boa vs. Python in 3D. Just put together an IMAX version. Still, we want to prepare you for some of the shocks that come from Jurassic Park 3D. We don’t mean the shocking scenes like when [SPOILER] the dinosaurs get out of control. We mean the shock when something comes up on the screen that reminds you that you’re watching a movie that’s 20 years old. So get ready for the following…

The computers are old

Yes, it’s true. You’re going to be looking at some big old bulky CRT monitors. That stands for Cathode Ray Tube. It’s the same technology that made your parents’ television so big and boxy when you were a kid, unless your dad was somebody like Steven Spielberg who could afford all the latest hot technology. If your dad is Steven Spielberg, tell him we really like Jurassic Park, and ask him to autograph a $1,000 bill and send it to us.

It’s okay to see those bulky old monitors because none of the characters say, “Cool! Computers!” It’s a little less okay when the two little kids at Jurassic Park get in the automated cars (which you could have already ridden at Six Flags back in 1977) and are really amazed to see how there’s a CD-ROM running the operation. (For those who don’t know, a CD-ROM was a disc that was kind of like a portable website that was too jealous to ever let you visit another website.)

It was always kind of WTF that a huge operation like Jurassic Park (and even a movie like Jurassic Park) began its tour with such lousy looking animation. Mr. DNA is a great creation, of course, and serves to inform the kids about how Jurassic Park managed to create all those dinosaurs. Budgetary concerns must’ve kept the cartoon looking really simple, though. Nowadays, somebody could’ve knocked out a better cartoon during lunch.

Richard Kiley is even less of a big deal nowadays

There’s a moment where the old guy in charge of Jurassic Park proudly notes that the tour’s pre-recorded narration is by Richard Kiley. (“We spared no expense,” is the running gag.) Frankly, nobody really knew who Richard Kiley was back in 1993. He was a very respected character actor, but that was an obscure reference even for the time. (Jurassic Park author Michael Crichton came up with the Kiley reference in the source novel.) Kiley died in 1999, so it’s pretty cool that Spielberg resisted the urge to dub in some bigger name like like Jack Nicholson.

Samuel L. Jackson is still cool (but in an uncool way)

Steven Spielberg once famously replaced guns with walkie-talkies in a new version of E.T. that he supervised. We’re very pleased to announce that nobody digitally erased the cigarettes that Samuel L. Jackson chain smokes in his role as Jurassic Park’s chief computer technician. It’s really unusual to see a sympathetic character smoking a cigarette in any Hollywood blockbuster nowadays. We’re sure somebody pressured Spielberg to change those cigs into lollipops. We’re also sure that some parents will be telling their kids, “Yes, it’s a shame that nice man was eaten by a dinosaur, but he would’ve died the next day from lung cancer, anyway.” Oh, and SPOILER!

The hacking has only gotten more hilarious

Jurassic Park was one of the first films to get ridiculed for a stupid depiction of computer hacking. That’s because of the scene where the young girl–who’s already proclaimed that she’s a hacker instead of a nerd–saves the day by figuring out how to secure the doors using the Jurassic Park computer network. The funny thing is that Jurassic Park actually has the girl using a real file manager called FSN. It was an experimental program that never went mainstream. FSN was pretty simple, though, and now that scene is even funnier. It looks like the young hacker is really thrilled with herself for being able to read a shopping mall’s map of stores.

The end credits for Jurassic Park go on forever. That makes sense. It took an awful lot of people to make the first truly impressive CGI of all time. It was a pretty popular gag for the rest of the ’90s to make jokes about the running time of any sci-fi epic’s closing credits. Then the studios wised up and decided it would be fun to try and keep the audience around. Pixar was really a pioneer in throwing in fun little moments to keep the kids seated through a rolling list of names–especially in 3D. But nobody thought to include a budget to spiff up the closing credits to Jurassic Park. They just scroll along like any dull 2D epic. You’re better off watching the closing credits to The Final Destination.

Will you be watching Jurassic Park 3D? Tell us below!