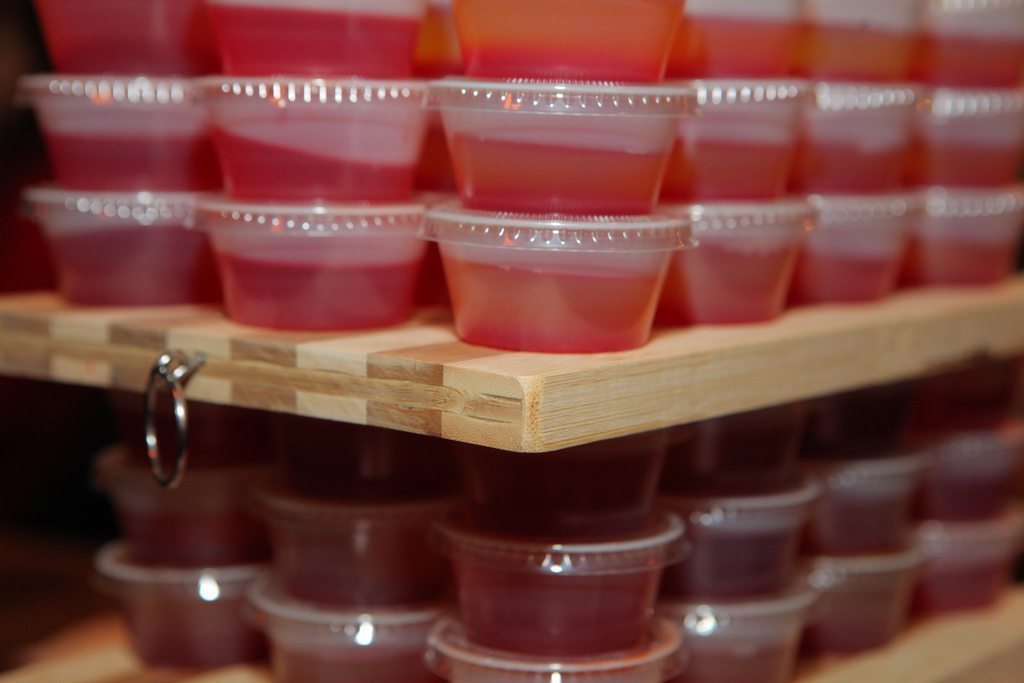 It is almost New Year’s Eve, and that obviously calls for some special adult beverages that go beyond a can of cheap beer or a shot of vodka that is basically rubbing alcohol.  If you can’t quite afford top shelf liquor or some nice champagne, and need to supply a ton of alcohol for a crowd, there is one obvious answer: Jello shots.  Jello shots are a college students best friend.  Jello is pretty cheap, and it comes in a bounty of yummy flavors, making it super easy to mask the taste of that rubbing alcohol vodka.  Even though they are dirt cheap, Jell-o shots take some time to make, and are thus special enough for an occasion as momentous as New Year’s Eve. If you plan on whipping up a batch of the jiggly delights this year, here are some tips and recipes you should consider before you take your creations to the fridge.

I cannot stress the importance of getting the proper vessels for your Jello shots.  Those paper Dixie cups are not going to cut it, especially for New Year’s Eve.  They get all warped and soggy when you pour the hot liquid in, and after they firm up it is near impossible to get the Jello out.  You need plastic, but not those hard plastic shot glasses either, those are also hard to take Jello shots out of.  There are places on line you can go to get legitimate Jello shot cups, but if you don’t have the time for that, you can try going to a local pizzeria, deli or anywhere that sells some kind of sauce to go, those containers are pretty close to perfect.

If you’re feeling really fancy or eco-friendly, you can use actual fruit as cups, just pour your Jello into a hollowed out piece of fruit, like half an orange, and then cut it into wedges.

When it comes down to choosing the alcohol for Jello shots, you can either play it safe, or you can get fancy with it.  The safe route is to just buy a handle of whatever vodka is cheapest that day.  It is getting mixed in with Jell-o and water, or some sort of juice, so it will not be the primary flavor of the shot.  This is not the time when you want to splurge on a bottle of Grey Goose.  If you want to be a little more exotic, you can get a flavored vodka that will compliment the flavor of the Jello.  Side note, if you think using Strawberry jell-o and 99 Bananas shcnapps will make great Strawberry banana shots, I have witnesses who say that is not a winning combo.  Schnapps are great, but not really for j-shots.  Tequila however, is a third option.  Lime jell-o and tequila? Yes please.

Tip #3: Give Yourself Enough Time

Rome wasn’t built in a day, and Jell-o shots shouldn’t be either.  If you want your shots to reach maximum jiggle capacity, you should ideally make these the night before the party, so they have plenty of time to set.  Ideally, they will be ready to go in about 2 hours, but to be safe, I would at least double that, and if your only fridge is either 10+ years old or a mini-fridge, I’d triple that 2 hours.  I mean, having un-set Jello shots wouldn’t be the end of the world, but half of the fun is trying to watch everyone free the alcoholic, wiggly treat from its container.  Which brings me to…

What am I talking about, you ask?  Well, after the shots are all firmed up and you and your friends are ready to start tossing back some Jell-o, you have to look like you know what you are doing when you actually eat the shot.  If you want to look like a pro, you ideally want the whole thing to come out in one piece that you can quickly slurp down so you don’t have to taste any trace of that cheap vodka.  What you don’t want to to is stick your finger in and mush the whole thing up.  That’s gross, and you will make a mess.  If you want to be cool while ripping Jell-o shots,  you can either a) Insert one finger into the cup, just one finger, and swipe it around the edges, loosening the whole thing up or b) Use the same motion, but instead of using your finger, just go for it and use your tongue.  It is New Year’s Eve, and if you are taking shots, it is only a matter of time before you lose your dignity, so have no shame when taking your shots as well.

So the standard Jello shot is the mix, some water, and the alcohol of your choice, but the standard anything is usually pretty boring.  Everyone at the party you are going to for New Year’s Eve is probably going to be all fancy and dressed up, so why shouldn’t the Jell-o be all dressed up too?  If you want to get all fancy, here are some recipes that I think sound delicious.  But hey, feel free to just follow the directions and swap out the flavors for whatever floats your boat.

According to The Kitchn, this is the basic formula you need for any good Jello shot, and I think we should trust the Kitchn.

Sex on the Beach Jello shot

(For the liquid that isn’t liquor, I would try lemonade or plain old water)

(You could also trade the Jager for Vodka and just have Red Bull vodka Jello shots, leave in the pineapple Jell-o though, that could be yummy)

It is always nice to have a few different flavors, not only so you have drink options, but because Jello shots look cooler when they come in a whole bunch of different colors.  Want even more flavor options? Check out this list. If someone could make me a batch of those Long Island Iced Tea Jell-o shots, I would really appreciate it.

Will you make Jello shots for New Year’s Eve?