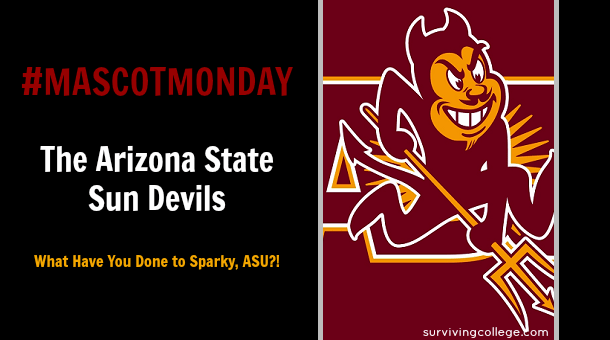 This week on Mascot Monday…

Wait, wait. Hold the phone. We interrupt our usual Mascot Monday post to ask: what were you thinking, ASU?!

We actually had this week’s mascot all planned out, but we’re going to have to catch you next week, Wichita State Shockers! Sorry, WuShock. Why? Because, in case you haven’t already heard, Arizona is up in arms over ASU’s mascot redesign, which was (very obviously) done by none other than Disney. Ready for the reveal? 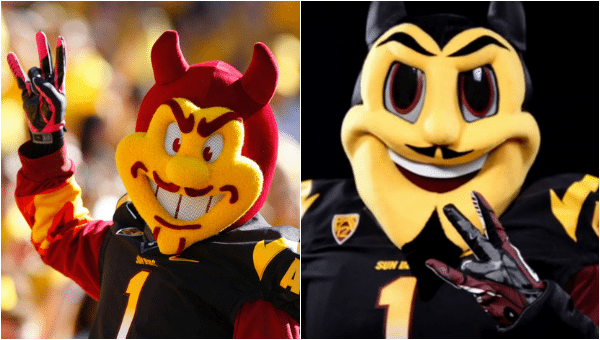 We would get snarky about Sparky’s new makeover, but actually, we don’t have to. Plenty of people are weighing in, so we figured we’d share and respond to our favorite comments quoted in the Daily Mail:

Our thoughts: Okay, we don’t see what is so disturbing about the new Sparky, but we have to admit that (even though we’ve got mad love for ya, Disney!) we like the old Sparky much better.

Our thoughts: We’re not really seeing this, but…sure? He does look a little weird.

And the most accurate description ever:

Our thoughts: Yes, yes, and yes. That is exactly what the new Sparky looks like.

According to a poll, 77% of people voted that they did not like the new Sparky. Only a mere 10% of people love the new Arizona State Sun Devils mascot, and 12 percent are undecided (we’re not sure where the other 1% fits in there, but we’ll go with it.) We have to agree with the majority – the new mascot doesn’t look like a mascot. It looks like a Disney villain dressed up for a football game. We’re just left wondering, “WTF?” But (potentially) good news, ASU fans: they may decide to reinstate the old Sparky we all know and love. Thanks Disney, but no thanks.

What are your thoughts on the new Arizona State Sun Devils mascot?