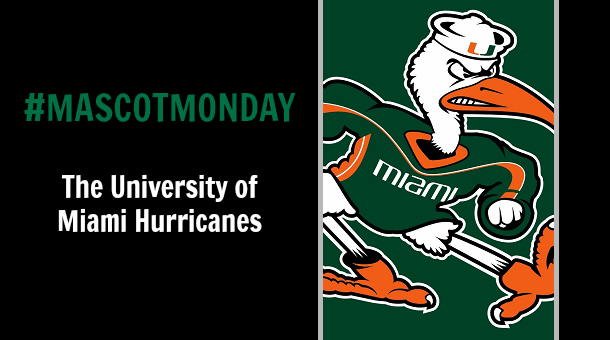 Mascot Monday: The Miami Hurricanes [AKA Sebastian the Ibis]

This week on Mascot Monday: The University of Miami Hurricanes (AKA Sebastian the Ibis)

…And just like that, we make our way back to the badass collection of college mascots! The Miami Hurricanes – what’s not to love? Your team name is the Hurricanes. What is more epic and awesome than that? Not much. But they’re not just the Hurricanes. Their mascot, Sebastian the Ibis (which, we know doesn’t sound badass or epic or intimidating, but trust us, it totally is!) just makes things even better for the University of Miami. But, before we go into why Sebastian the Ibis is so cool, we should probably answer the questions we know you’re thinking right now: why an ibis, if their team name is the Hurricanes? Why not a scary frickin’ hurricane as their mascot? And what does an ibis have to do with anything?

As it turns out, the school’s first mascot was actually a bulldog named “Hurricane I” but, according to Wikipedia, the school chose the ibis to be their unofficial mascot after naming their yearbook “The Ibis” in 1926.

Why, you ask? Well, “the Ibis is known for its bravery as a hurricane approaches. Folklore maintains that other birds look to the Ibis for leadership. The Ibis uses its instinct to detect danger. It is the last sign of wildlife to take shelter before a hurricane hits, giving warning that danger is imminent. As the storm passes the Ibis is the first to reappear, a sign that clear skies are approaching.” 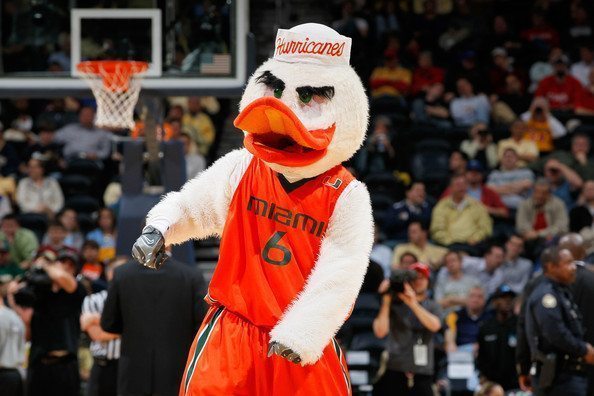 Just try to tell us that’s not totally meaningful and awesome and symbolic in all the right ways. You can’t, because it’s not possible. The Miami Hurricanes picked one heck of a mascot when they decided on Sebastian the Ibis. But that’s not the only reason why we think Sebastian rocks. Just look at him – he is super creepy and intimidating-looking (something we never thought we’d be able to say about a bird costume.) He looks like a sailor version of Big Bird on steroids. If that doesn’t intimidate an opposing team, we don’t know what will.

What do you think of the Miami Hurricanes/Sebastian the Ibis?