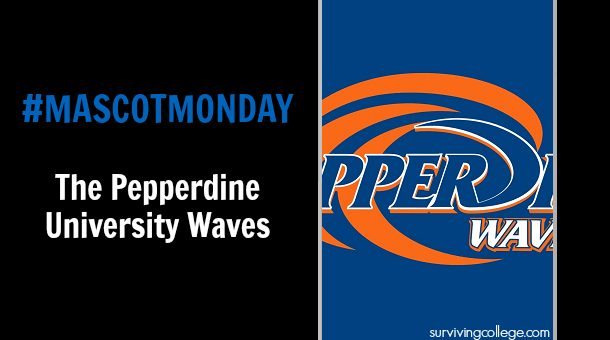 This week on Mascot Monday: The Pepperdine University Waves

When you really think about, this week’s mascot is a no-brainer.  Thanks to Pepperdine’s more than ideal location – nestled along the sandy beaches of Malibu, California – it doesn’t take a genius to think of the perfect mascot for Pepperdine.  Willie the Wave is an incredibly original mascot and a great representation of both Pepperdine and the California beach scene.  Although Willie is not very intimidating (okay, maybe not at all) he does look pretty awesome!

According to Pepperdine’s Wikipedia page, the Waves have been the school’s mascot ever since it’s founding in 1937.  University president Batsell Baxter selected the nickname after faculty and students expressed a resistance to any animal mascots.  Although Pepperdine has never changed its nickname, it has attempted several different mascots before finally landing on Willie in 2006.

From 1945 to 1950, Roland the Wave strolled Pepperdine sidelines as the university’s first mascot before being replaced by Joe the Pelican in 1951.  The university quickly dropped Joe after just one season due the expense of caring for a live animal.  The following year, Willie the Wave made his debut, and thus was born the iconic wave hair.  In 1996, Willie was replaced with King Neptune as part of a re-branding effort –  if you ask us, he  really just looked like King Trident from Disney’s The Little Mermaid – however, the nickname never stuck and was dropped in 2003.  After a little bit of a makeover, Willie was brought back to Pepperdine in 2006.

What’s not to love about Willie the Wave?  Just look how incredibly awesome he is.  With his boardshorts and Aloha shirt, he almost looks like a frat boy trapped in a mascot’s body.  We love the school colors of orange and blue, which by the way, have not changed since the Roosevelt administration.  Let’s be real, Willie always looks ready to party!  And let’s not forget his abs.  We’re a little suspicious Willie is the inspiration behind Mike the Situation’s famous shirt lift.  However, the best feature of Willie the Wave is most definitely his hair.  I mean, he has a wave for hair; how cool is that?  We applaud Willie’s school spirit and originality, and we tip our hats to Pepperdine for its creativity.  To all you other college mascots out there, you should be taking notes!

What do you think of the Pepperdine University Waves?