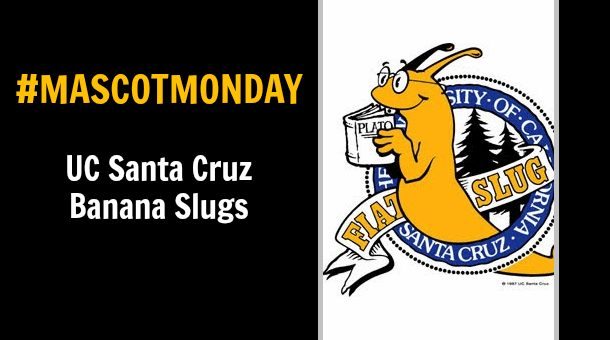 This week on Mascot Monday: The University of California at Santa Cruz …Banana Slugs? 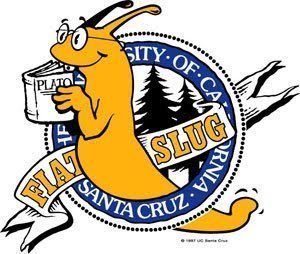 Remember how we said sometimes mascots are just plain weird? Well, the UCSC Banana Slugs fit that category perfectly. Let’s just think about this for a sec: so the school’s mascot is a little, yellow slug? Not a tiger? Or a shark? Or even some cool bird? Something that would make other schools either quiver in fear or feel sadly jealous of their opponents? Nope. A slug. Neither envied nor beastly. Just a little, slimy, yellow slug. . Try to tell us that doesn’t sound strange to you. Just try.

But, you know what? We don’t care that it’s a weird mascot, because we love it. You know why? It’s history and reasoning behind it is totally great. According to the school’s website,

The Banana Slug, a bright yellow, slimy, shell-less mollusk commonly found on the redwood forest floor, was the unofficial mascot for UC Santa Cruz coed teams since the university’s early years. The students’ embrace of such a lowly creature was their response to the fierce athletic competition fostered at most American universities.

And the best part? In 1980, the sports teams and the school’s chancellor voted to change the sports mascot to the Sea Lions. And a mere 6 years later everyone got tired of having two mascots and voted to choose just one – they could’ve chosen the much more cliche Sea Lions to represent them, but they went back to the Banana Slugs. Now that’s loyalty! (…Or being a hipster, we’re not really sure which.)

Also, did we mention that the banana slug in their logo looks a little Dr. Seuss-esque? Love it.

What do you think of the UCSC Banana Slugs? Let us know!