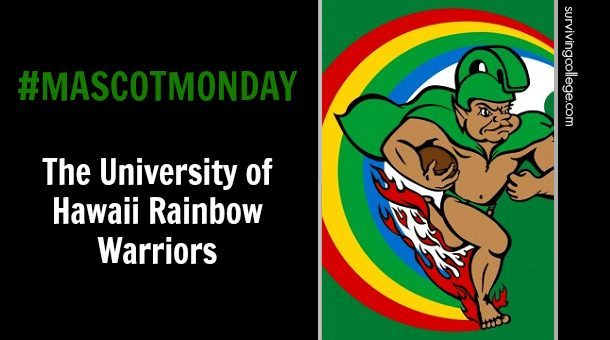 This week on Mascot Monday: The University of Hawaii Rainbow Warriors. 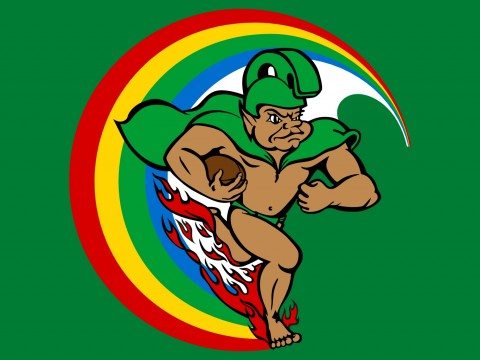 The great thing about the University of Hawaii’s mascot is that it combines two things you would otherwise never associate with one another.  On the one hand, you have a totally badass warrior who could tear you apart limb for limb.  Then you have something so elegant and innocent as a rainbow.  Major points on originality!  If you ask me, Hawaii’s nickname is slightly deceiving at first glance.  The first half of the name plays into that famous laid-back island mentality.  But then you come across the “Warrior” and you suddenly become extremely confused and terrified all at once.  I mean for real, if that doesn’t strike fear in your eyes, I can’t talk to you.

According to the university’s official athletics page, Hawaii first adopted “Rainbow” as the school’s nickname when head coach Otto Klum’s team upset Oregon State, 7-0, in the 1923 season finale.  During that historic game, a rainbow appeared over the field.  Local reporters soon started referring to Hawaii teams as the Rainbows and the tradition began that Hawaii would not lose a game if a rainbow appeared.  As for the second part of the name, the “Warrior” holds a special place in Hawaiian history, as it was the warrior who united the Hawaiian islands under Kamehameha the Great.  It wasn’t until 1974 that the UH football team officially adopted “Rainbow Warriors” as the program’s official nickname.  Interesting fact, beforeJuly 1st of this year Hawaii allowed each men’s sports program choose its own team name.  The basketball, swimming and diving, and tennis teams retained the name “Rainbow Warriors”, while the football, golf, and volleyball teams chose the “Warriors”. 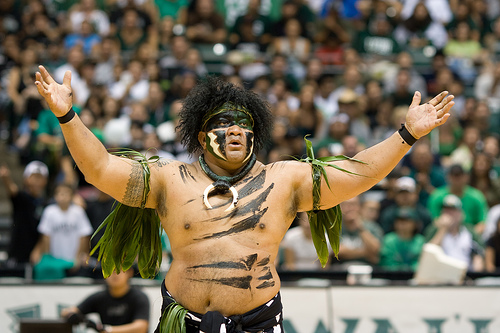 The thing I love most about Hawaii’s logo is that it represents the tradition and history of the university as well as the Hawaiian islands.  The colors not only work extremely well together but they carry a much greater significance.  Check out the university’s athletics page provided above to learn more about Hawaii’s color scheme.  While some schools may choose their team colors based upon the university’s history, Hawaii takes it to a whole new level–in a very poetic fashion if I may add.  Besides the colors, the tribal design is fantastic.  Though it may appear simple in design, it perfectly incorporates island culture and Hawaii’s mascot.

Moving on to Hawaii’s mascot, Vili the Warrior, I have nothing but awesome things to say.  Now, I know that I call a lot of our Mascot Monday features badass, awesome, and intimidating–or some variation–but all pale in comparison to Vili.  (Did we mention he’s a real person? No big-headed, fuzzy costumes needed!) Forget everything you think you know about complete badass mascots, now look at our photo of Vili.  Are you looking?  Absolutely terrifying, I know.  How much are you willing to bet Vili killed an animal for his necklace?  Now that I think about it, he probably didn’t.  He may be a warrior, but let’s not forget, he’s a Rainbow Warrior, he does have a soft side.  I think if I ever saw Vili doing the Haka, I would run for the hills as fast as I possibly could.  (If you’re unfamiliar with the Haka, it’s that really intimidating dance Hawaii and the New Zealand rugby team does before their games.)  Vili is definitely the kind of guy you do not want to cross, but wouldn’t mind partying with.

What do you think of the Hawaii Rainbow Warriors?