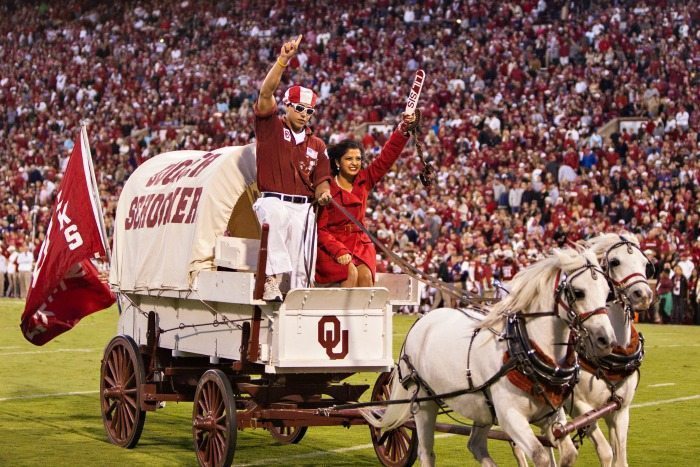 This week on Mascot Monday: the University of Oklahoma Sooners.

I figure since we featured the Texas Longhorns last week it’s only fair that we profile their archrival, the Oklahoma Sooners, this week.  Don’t tell my dad this (he’s a UT graduate) but OU has a pretty awesome mascot.  Although I consider myself an honorary UT fan I can’t hold that against Oklahoma, despite how much I may really want to.  It’s important that I try and remain impartial, so here it goes.

Many of you are probably familiar with Oklahoma’s nickname, the Sooners.  But for those of you who have no idea what I’m talking about, let me give you a big of a history lesson.  As Wikipedia shows us, the word “Sooner” was a name given to settlers who settled in what is today Oklahoma before President Cleveland officially proclaimed the land open to settlement in March 1889.  The name comes from the “sooner clause” of the Indian Appropriations Act of 1889, which stated that anyone who entered and occupied the territory before it was officially opened would denied the right to claim any land.  But of course the Sooners said screw that, I’m going to do what I want.  The university adopted the name “Sooners” as a way to pay tribute to Oklahoma’s rich history.

If you’re a fan in simplicity and believe it’s a necessity in school logos, then look no further than Oklahoma’s “OU” logo.  The Sooners’ logo is just the school’s initials overlapping one another, nothing to complex about it.  In fact, nothing complex at all.  But that’s not to say it’s not an iconic logo.  You couldn’t be further from the truth.  Thanks in part to Oklahoma’s strong academics and elite athletics program, the Sooners’ logo is widely considered one of the best in the entire country. 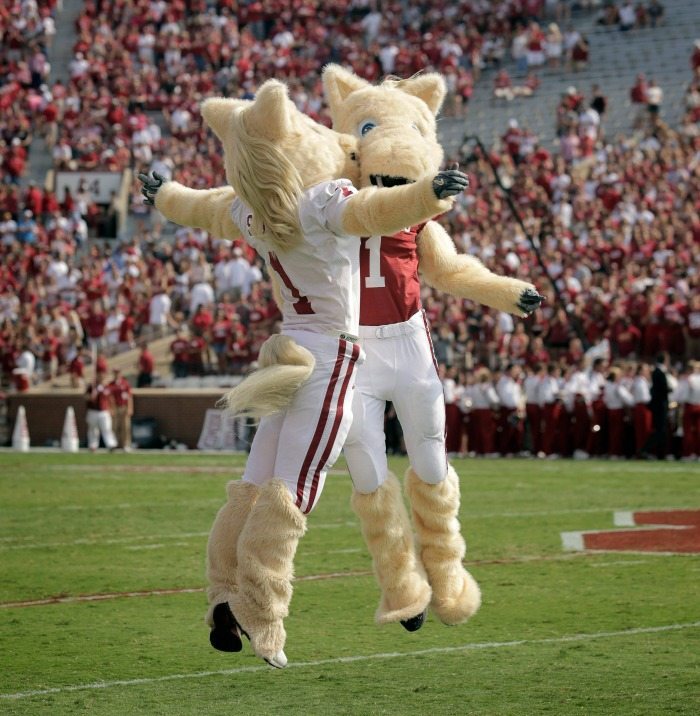 Oklahoma’s official mascot is the Sooner Schooner, a scaled-down replica of the Conestoga wagon used by Oklahoma settlers in the late 1880’s pulled by two white ponies named Boomer and Sooner.  Its name comes from the common term used for these types of wagons and the Sooner nickname as well.  The Schooner made its debut in 1964 but didn’t become the university’s official mascot until 1980.  The Schooner has become a highlight at every Sooner football game and given the university something to be proud of.  Let’s not forget about the costumed versions of Boomer and Sooner, who attend every Oklahoma game in full Sooner gear.  Boomer and Sooner are definitely huge fan favorites in Norman and it’s definitely not difficult to see why.

What do you think of the Oklahoma Sooners?