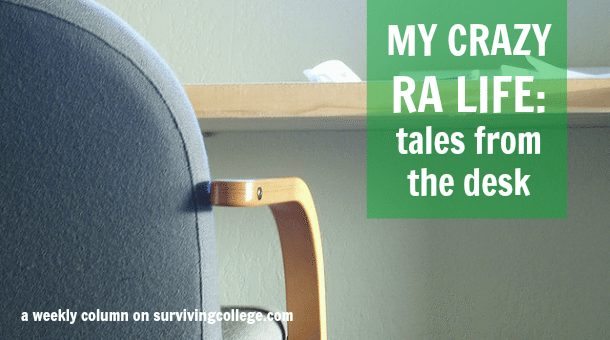 My Crazy RA Life: Tales From The Desk

I don’t know how I did it, but I survived a 3-year-long career as a Resident Assistant. I got out alive with a degree and some seriously crazy memories. Last week I got kidnapped and this week, in the spirit of finals, I’m trapped at a desk…just not the same one you’re stuck at. This is my crazy RA life and yes, these are all true stories!

The aforementioned phrase is almost akin to “Lord Voldemort” — as in, you just don’t say it around RAs at my school. I wish I was exaggerating, but the thought of desk duty has made even the most seasoned Resident Assistants cry. It’s a social-life-ruining RA purgatory where you are forced to sit at a desk until ungodly hours of the night and check the IDs of people you already know for “security purposes” and you don’t even get paid extra for it. In fact, you get paid less. Seriously?

Oh, and the fun part: you have to ask the RA on rounds if you can go to the bathroom (that is barely 10 feet away from you) and sometimes that RA doesn’t even show up (not kidding!)

That being said, it’s not so bad. If it’s quiet (not likely) you can get your homework done. If you have awesome friends, they’ll come sit with you and keep you company. But it’s more likely that you’ll spend your night of desk duty listening to drunk residents tell you how deeply sorry they feel that you’re stuck there all night.

Or, in my case, the desk was an extremely powerful creeper magnet.

Want proof? Here are just couple of my favorite (if you can call them that) desk duty moments…

It was a Thursday night only a week into Fall semester, and it was nearing the end of my shift. A guy from the soccer team drunkenly stumbled out of the bathroom (pants unzipped) and stopped at the desk. (Note: we had never spoken before, so it was already really awkward.)

“I’m on the soccer team. Me and my cousin are from Mexico,” he told me through a heavy accent.

I nodded, but didn’t know what to say. Before I could muster something up, he continued.

“Did you go to the game today?” he asked.

“Yeah I did, actually. Did you play?” I responded, trying to be polite.

“Today was my first game,” he announced, proudly. “Are you an RA?” he continued. I nodded.

“What’s your major?” he asked. I told him I studied history and writing. The questions kept coming.

“How old are you? What year are you? Where were you born?” he rattled off one question after another. I told him I was a senior and that I was from Connecticut. In response, he repeated, “Me and my cousin are from Mexico!”

“You told me that. That’s cool.” I said, trying not to laugh at his drunken behavior.

“What time do you go to bed?” he repeated. I looked at him, dumbfounded. “Do you mean what time I’m done with desk duty?” I asked. He shook his head.

“Tonight? What time am I going to bed tonight?” I asked.

“No, every night,” he insisted.

“Uhm…what?” I said. He just looked at me, waiting. “Late? I guess?” I responded, incredibly confused.

If you’re wondering what just happened, don’t worry, so am I.

Chomping at the Bit

Remember when I said that not only does trouble always find me, but I seem to drag others down with me as well? Here’s another ridiculous example.

It was a weeknight, I was bored, and my friend Mary* was on desk duty in another building. I decided to trek across campus and sit with her to keep her company. That was probably a bad idea, since she was usually that other person who shared in my horrible luck.

One of the residents of the building with whom I had mutual friends, Dan*, came out of his room and stopped at the desk to say hi on his way down the hall.

Like every other moment in my crazy RA life, what seemed like a normal, everyday thing turned really bad in a matter of a few minutes.

Dan proceeded to hit on Mary, who, knowing that I knew Dan fairly well, laughed it off and played along a little. He asked for her number and she agreed that they could get lunch sometime at the snack bar but refused to go off campus for a date. Dan thanked me for being a good wingwoman (not that I was trying) and went back into his room.

Shortly thereafter he came back out, and this time it was pretty apparent that he was drunk. He started to hit on Mary again, and the two of us just kind of laughed uncomfortably, not really knowing how to respond.

And then, well, I don’t remember why exactly what happened happened, but, he tried to sit on my lap. Mind you, Dan was a rather muscular lacrosse player so that didn’t really work. I tried to get him to move but he refused. Finally he got up. Then, he told Mary he wanted to bite her.

Mary protested and then he told me he was going to bite me instead.

“Absolutely not!” I told him sternly, feeling simultaneously confused and concerned.

In a very, very quick turn of events, Dan actually did bite me. He turned and latched onto my leg just above my knee so hard I yelled. I tried to push him away but failed. He let go, and quickly bit Mary too.

Mary and I just looked at each other, totally baffled and in shock.

This was no Twilight-esque fantasy. It was real (and awkward!) and it hurt.

I went into the bathroom to look at my leg. The bruise was already forming and it was so bad, it looked like a purple and yellow dental impression. It lasted for several weeks.

Dan pretty much ran off to go party and Mary and I didn’t even think to call Public Safety. As an RA, you know how to react in a situation like that when it happens to your residents, but you don’t expect it to happen to you.

In the end, we told an RD who gave Dan a stern talking-to. Dan never spoke to me again and needless to say, he never did get that snack bar date with Mary. And while we could’ve gotten him in more trouble, we decided to just move on from the whole awkward encounter.

Stay tuned ’til next Wednesday when My Crazy RA Life returns!