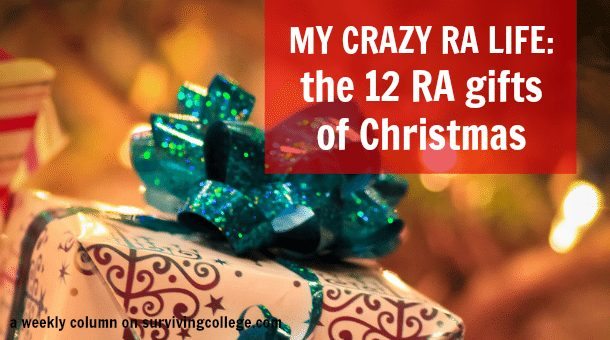 My Crazy RA Life: The 12 RA Gifts of Christmas

I don’t know how I did it, but I survived a 3-year-long career as a Resident Assistant. I got out alive with a degree and some seriously crazy memories. Last week I was bitten? Yeah… And this week I am sharing the 12 moments that made my job worth all of the madness. This is my crazy RA life and yes, these are all true stories!

I know I usually have some totally insane, ridiculous story to share with you guys as soon as Wednesday rolls around, and I regret to inform you that won’t be happening today. (Don’t worry, I still have more crazy stories to tell, just, not today!) The fact of the matter is, the world is supposed to end in 2 days, and just in case the Mayans actually did predict our demise (though personally I think they just got lazy with their calendar) I want my (potentially) last story to mean something. Besides, it’s the holiday season!

I’ve said time and time again that I had terrible luck as an RA. But, if you look at the bigger picture, that’s actually the furthest thing from the truth. Sure, I dealt with drug busts, creepy residents, and a few intensely awkward moments (okay, a lot!) but I also had fantastic residents who loved me. What’s better than that?

So, in the spirit of Christmas, here are my 12 actual favorite RA moments!

(Warning: inspired by the Christmas song, but definitely not meant to be sung to the tune…)

Okay, and not all of the numbers match up. I did the best I could, alright?

After going through all of the insanity that the RA job put me through, nothing felt better than knowing I was appreciated. At an end-of-semester floor meeting, I was wrapping up what I had to say when I asked if anyone had any questions or anything they’d like to add.

One girl who was leaving to go abroad responded, “Thank you for being such an amazing RA! I’ll miss you!”

The rest of the room chimed in in agreement. That moment made everything worth it.

Being an RA is never a one-man-show. The rest of your staff, and the RA staff as a whole, are like a family that always have your back. But sometimes your fellow RAs go above and beyond what you expect, and will go out of their way to make you laugh, let you vent, and to let you know that you’re doing a good job. Thanks to the older staff members who showed me the ropes, the newer ones who told me I inspired them, and the rest who spent countless nights up late on rounds with me or on desk duty, making me laugh.

There’s nothing more frustrating than putting on programs and having nobody show up, and it happens all the time. But, I suppose that the frustration that comes with failed programs only makes the awesome ones more awesome. Here’s to the residents who played man hunt, sang karaoke, came to Saturday afternoon movies, and loved playing charades so much that they stuck around to make new cards and play another game. Oh, and to the residents who went door-to-door to get people to attend, just because.

Sometimes the most memorable moments aren’t the crazy shenanigans. Sometimes, they’re just the times that you spent hours eating chips and queso in the hallway, scrolling through gifs on Tumblr with your residents when you were supposed to be writing a paper. Did I say sometimes? I meant all of the time.

On my 21st birthday, a suite of girls who had been my residents for 2 years surprised me and came to my door with a box of cupcakes from the bakery in town. But, their birthday surprises didn’t end there – a week or so later when I went to a local bar with friends, they called me over and bought me a drink!

That awesome moment when your residents become your friends.

You may think the worst part of being an RA is dealing with other people’s problems, and while it is difficult, it is actually a really great feeling to know that your residents trust you enough to tell you what’s going on in their lives, or to come to you when something goes wrong (even better, to tell you good news first!)

Who doesn’t like to be complimented and/or bragged about? (Don’t lie!) And no, I’m not talking about all the times residents broke policy and tried to get me to look the other way by telling me I was pretty (although those moments didn’t exactly hurt…) I mean the times that I was introduced to freshmen as “the best RA ever” and all the times that people thought I was important enough in their lives that they introduced me to their parents. My favorite story? After dealing with the ridiculous drunken antics of one of my favorite residents, his mother told him to thank me for her and said I was a really sweet girl.

You know you have beyond amazing residents when:

They ditch a Saturday night party to sit outside with you because you’re upset that your mom’s in the hospital.

They stand up to an angry, drunk resident who has you cornered.

They save you from the creepy stalker who followed you into your dorm.

They keep you company on desk duty, even at 1 AM.

They invite you to dinner when your friends made other plans and didn’t tell you.

I had horrible roommate experiences in college. Horrible. For most of my college career. But, for just one semester, I had 4 wonderful suitemates. They were complete strangers to me when I moved in during my first semester on the job, but they made me a part of their little family almost immediately.

And, did I mention they kept everything clean? Yay!

I met three of my best friends because of my RA position. That in and of itself made every horrible documentation and every rough night worth it, without a doubt. Telling the stories behind all of them would take too long and probably wouldn’t make any sense to the general public, so I’ll hold off on those. All that matters is, while I sacrificed a lot to be an RA, I gained amazing, trustworthy, loyal, fun friends. So cheers to that!

Not many people get to consider their former supervisors some of their closest friends. I have two who know my whole life story, who support me unconditionally, who I have incredibly fond memories with, and who would stay up until 1 am to listen to me vent. And the best? I got to see one of them get married this summer!

…And a Boyfriend? in a Pear Tree

Did I mention I met my boyfriend of over 2 years because of my RA job? It’d be pretty terrible if I left him out of this, wouldn’t it? I wouldn’t have formed such a close friendship with him if I hadn’t been an RA, and thus, I would’ve missed out on a great relationship.

So, just in case the world really does end in 2 days, here’s my message.

To those of you who are a part of this list: know that you made a huge difference in my life, I love you, and I owe you for making My Crazy RA Life a little more bearable.

To fellow RAs: know that no matter how hard your job gets, it’ll always be worth it in the end.

To residents everywhere: if you have an amazing RA, tell him/her you appreciate them. That one little phrase can mean the whole world. Trust me.

Stay tuned ’til next Wednesday for another (actually) crazy story!

…well, if we survive the apocalypse, that is.