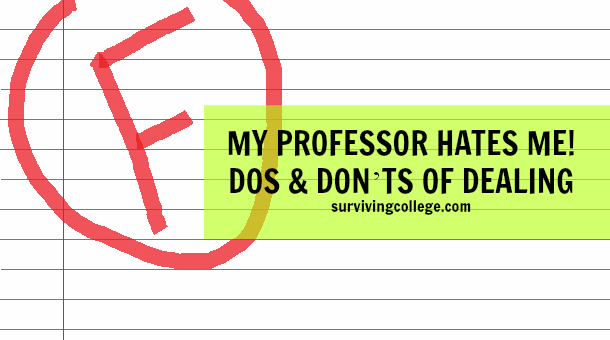 My Professor Hates Me!: Dos & Don’ts of Dealing

We’ve all been there before, dealing with that one professor who just absolutely hates you. Because this professor hates you, they purposely give you bad grades and call you out in the middle of class for no reason. If you’re nodding your head so far, then we’re in agreement. I have a professor who just infuriates me, and the other day he decided to use my essay as a “what not to do” guide for the other students. I was so fed up that I started to scream at him (more of that later). Since I don’t want anyone to go through what I went through, I’m going to help every student out there dealing with this situation. Here are the do’s and don’ts of dealing.

Don’t gossip to anyone about the professor you’re having a problem with. It’s natural to vent to your friends about what problems you’re having but make sure it doesn’t ever get out of your inner circle. Rumors always have a twisted way of going from person to person, each time being blown more and more out of proportion and making the situation worse. And remember, rumors always find their way to its source and the last thing you want to happen is to have your professor find out what you’re saying about them (which at that point will make things unbearable.)

Don’t scream and yell back at your professor, even if they’re humiliating you in front of the class. When I say humiliate, I mean: walking in late and having them go off, being called to answer a question when you obviously had no idea, having your test or paper being overly criticized in the middle class, or even a combination of all three. I can say from experience it’s always better to bite your tongue in these types of scenarios. A few days ago, my class had a term paper due and everyone had theirs out on their desk. My professor looked at mine and then proceeded to call it a piece of garbage. Keep in mind, he did this to no else but me, so in a fit of rage I yelled, screaming things like “no one’s perfect, we all make mistakes,” “it’s the first assignment, I know it’s going to be not 100% correct,” and “shine bright like a diamond,” (things got kind crazy at that point.) So remember, just bite your tongue.

Don’t go out on a limb to make your professor hate you even more. Usually when people hate each other they make it a point to just piss each other off for no other reason other than just to make them angry. Don’t try to be a smart mouth or come late to class on purpose, because it’ll only drive the wedge even deeper. The more you try to make the situation worse the harder it’ll be able to recover. Just don’t say anything in class, go about your business, and hope that the semester ends peacefully without a standoff.

Do try to switch out of the class if it’s not too late. I know this is the obvious solution but some people overlook it. Many schools have a trial period where you can freely take and drop any class you want within a certain period of time. This is the perfect opportunity to get a feel for the class, and most importantly the professor, and if both are rubbing you the wrong way then that’s your cue to switch out.

Do talk to your academic advisor or a school guidance counselor if trying to talk to your professor amounts to nothing. This is absolutely the last “do” on my list because this involves getting other people involved in the problem. If you can keep it between you and your professor, that’s ideal. But, if it can’t be done on your own, an outsider may be the best resource in helping you deal with this.

Do you have any professor horror stories? Share them below.