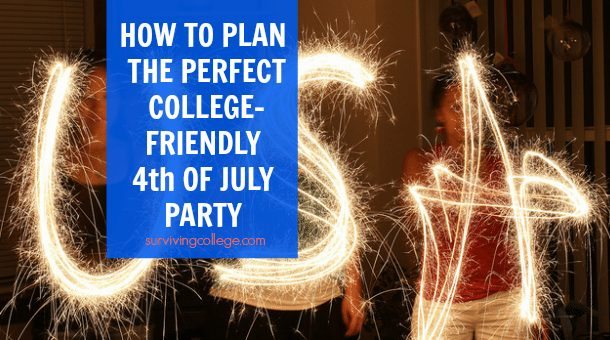 Although we may not be as wealthy as Martha Stewart, we are all still capable of throwing a kick-ass 4th of July party. Designer decorations? Yeah right. On a college budget we’re all about DIY projects and whatever produce is on sale at the grocery store. Just because you’re watching your spending, doesn’t mean you need to compromise the integrity of your party! Sound too good to be true?

Here are some helpful tips on how to plan a great patriotic party while sticking to a college budget (which might not be much more than a few dollar bills, two pennies, and a stick of gum).

#SorryNotSorry but no holiday is good without good food. July 4th is all about grilling on the barbecue, eating, spending time with your friends and family, eating, watching fireworks, drinking, and probably more eating. Just because you eat a lot, doesn’t mean you need to spend a lot though. Instead of grilling steak and Kobe beef burgers, try something a little lighter (on your wallet and your thighs) and serve veggie burgers this summer instead. Veggie burgers are packed with whole grains, healthy veggies, and tons of vitamins. You can make them yourself or buy them in the frozen foods section at your local supermarket. Obviously after a barbecue, there must be a delicious, red-white-and-blue dessert. You don’t need to get crazy and try to make this flag-inside-of-a-cake stuff we’re seeing all over Pinterest. How about something simple? Try chocolate covered marshmallows or pretzel rods rolled in red, white, and blue sprinkles? They’re so easy to make, and besides, your friends will eat whatever you put in front of them (lets be honest).

*Note: we do not support underage drinking. Please drink responsibly*

Sangria is just the epitome of summery, and it’s really fun to drink. It’s super easy to make Sangria, and even easier to make it Independence Day-themed. Try this delicious recipe from Imagine Design Blog: 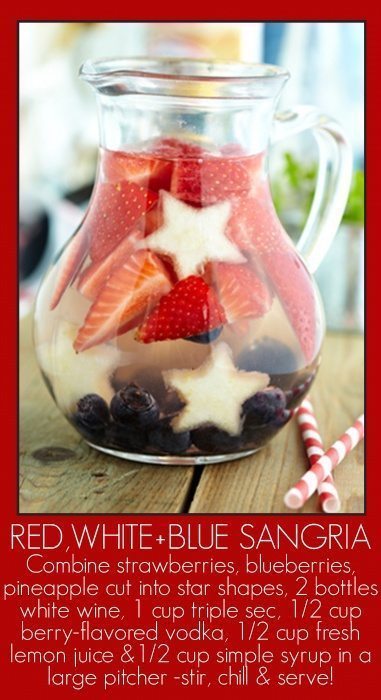 If you’re not feeling the Sangria vibe, you could also make Jell-o shots. They are easier than you’d think, and you would be surprised how far you can get with two boxes of Jell-O mix and just a few other ingredients.

This amazing recipe by hollicakes will tell you step by step how to make these super cool shooters: 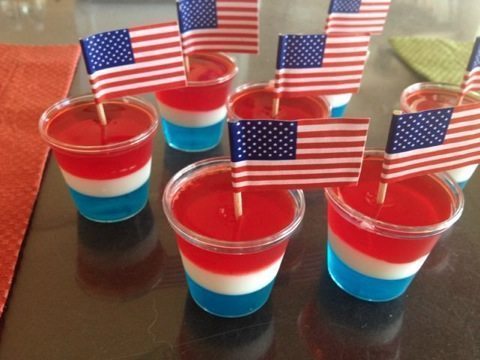 1. Blue layer; Heat 1 cup water, add blue Jello mix, stir until dissolved. Add 1 cup vodka, stir. NOTE: this recipe is pretty strong. If you want less intense jello shots, try 1 1/4 cups water to 3/4 cups vodka. Don’t make them any stronger though, because the gelatin in the jello needs the water to set the alcohol. Not enough water, and they might not set.

3. Next is the white layer; this is the most difficult part of these tricolor shots! Place powdered gelatin and water in small bowl, let soak for 5 minutes to allow the gelatin to “bloom.” In a medium saucepan, heat cream, milk, sugar and vanilla extract to a simmer, stirring occasionally. Remove from heat, add gelatin and stir to dissolve. Add vanilla vodka. Let cool 10-15 minutes before topping blue layer.

6. Once the white layer has set, and red mixture cooled, fill the cups the rest of the way until full. Refrigerate until set, about 1-2 hours.

7. Enjoy some patriotic jello shots!! =] Garnish with mini flags on toothpicks. Looks super cute, plus using the toothpick to release the jello from the sides of the plastic cup makes it come out easily without breaking apart.

And Last But Not Least… Party Set-Up

Let’s face it, every party has to have good music and decorations to be considered ‘successful’. Pandora has playlists geared towards summer such as “summer hits of the 90’s” and “summer hits of the 2000’s” to help jumpstart your party soundtrack. Stores like The Dollar Tree and Party City have red, white, and blue plastic utensils, cups, plates, and tablecloths at reasonable prices. And, Sweet Something Designs shows you how to turn old pickle jars – or any jars you have lying around the house – into flag decorated candle holders.

(images via Sweet Something Designs)

Eat, drink, watch fireworks, and be patriotic. Be responsible and don’t drink too much or party too hard. When in doubt think to yourself…”What would Uncle Sam do?” (And don’t forget the sparklers!)

Have a happy 4th of July!