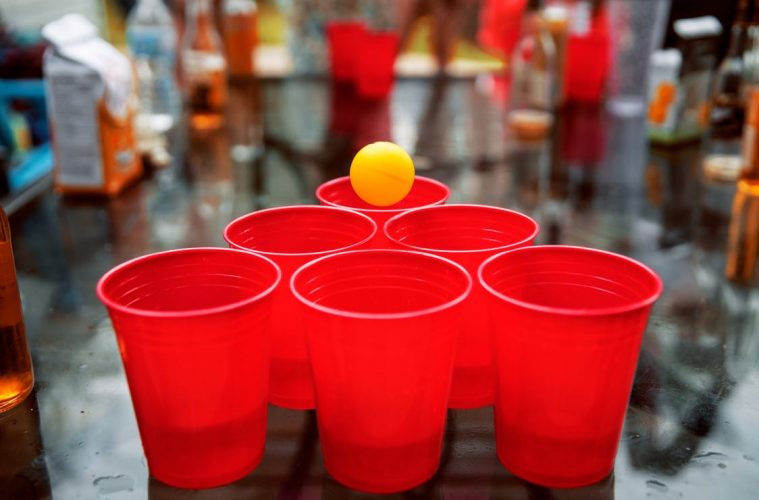 How to Play Rage Cage

Rage Cage is the most intense drinking game I have ever played, bar none.  It takes the basic rules of quarters and adds time pressure and a little bit of strategy.  As with all drinking games, I’d advise for you to drink responsibly — it’s no fun pregaming with something like Rage Cage, only to end the night early because you went overboard. I’ll detail the rules and requirements for this awesome game below.

To play Rage Cage, you will need:

Place the cups for drinking in the center of a table or playing surface and gather everyone else in a circle around them.  Fill each of the cups a quarter of the way full with whatever you are drinking that night.  Designate two players to start; they should be on opposite ends of the circle from each other and give them each a ping pong ball and one of the empty cups.

When the game starts, the players with ping pong balls will try to bounce the balls into the empty cup in front of them, like a game of quarters.  The ball can only bounce once before going in, otherwise it does not count.  Players keep trying until they make the cup.  Once the ball successfully lands in the cup, they pass the cup and ball clockwise to the next player and the sequence starts again.

If, however, the players make the cup on their first attempt, they can choose to pass their cup to any player in the circle.  This is important because this mechanism allows you to get people to drink.  The basic strategy is you want to pass the cup to the player behind the other cup.  If he makes his cup before the other player, he can stack his cup into the other players and force him to take a drink from the center.  I’m sure that explanation made no sense whatsoever  so I’ll try again with letters to represent players.  Players A, B, C, D, E and F are sitting around the table.  Players A and D have the cups and ping pong balls at the start of the game.  Lets say player A makes the cup on his/her first try and player D misses.  Player A should then pass the cup to player C.  If player C can make the cup before player D, C can stack the cup into player D’s cup.  Player D must then grab a cup from the center and chug it while player C gets to play again.  When player D finishes drinking, he/she stacks the now empty cups and try to bounce the ball in again.  If C can successfully get the ball in before player D finishes, this cycle repeats.

If the ball does not go into the cup on the first attempt, the cup moves around the circle clockwise as normal after the player makes the cup.  As the game continues, it gets harder and harder because the stacked cups become higher and higher and require stronger bounces to make.  When all the cups from the center are gone, the game ends.  At this point, all the cups except for one should be stacked on top  of each other, with the last cup in front of the “winning” player.

If a ball misses the empty cup and bounces into one of the middle cups with beer, the offending player must drink that cup before continuing the game.