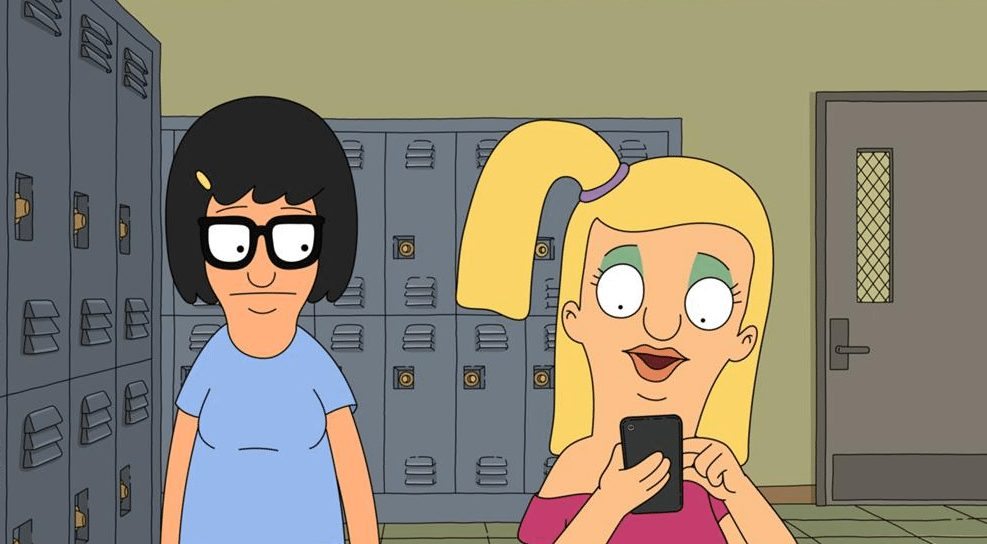 Tina is frantically refreshing her email, waiting for an invitation to Tammy’s bat mitzvah which will be packed with BFOS—Boys From Other Schools. But Tina is not invited, so no BFOS for Tino.

Everyone’s going to Tammy’s bat mitzvah but Tina, so she sighs all over Louise’s sandwich that is heating it up into a panini. Because she’s pathetic, Tina volunteers her father to cater the slider portion of the bat mitzvah so that she can attend as a caterer. When Bob doesn’t want to do it, Tina pitches a fit and turns bright red. Gene shouts, “Ugh! One Luft Balloon!” which is now what I will say every time someone blushes. Bob ultimately agrees because kids first, and now Gene wants to be circumcised. 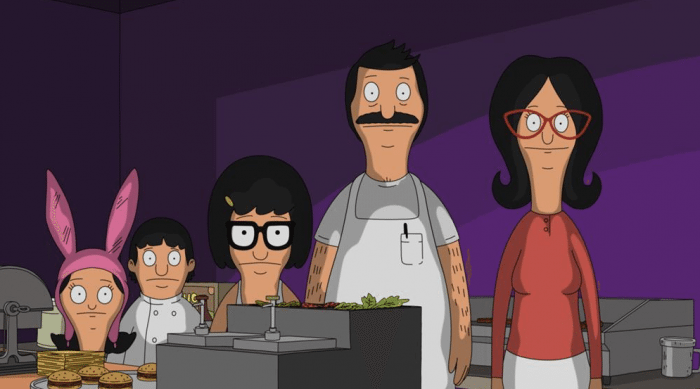 So Tammy’s bat mitzvah is insane, with a giant creepy bust of Tammy’s face dangling from the ceiling like the ugliest piñata in the world. There’s a Blossom-style intro, and Tina feels “not in the mix” because she can’t reach out an touch anyone. Tammy demands to know where the Tammy toothpicks are, and the event planner, Janet, crams a headset on Bob’s noggin. Tina walks to the bathroom because then for at least one sad moment, it’ll be like she’s a guest at the party.

Louise confiscates the headset and tortures Janet. “Goooooobzilla…Gobzilla’s gonna kill you, you’ve gotta get out of this, you’re better than this, Janet….what’re your dreams? You gotta have dreams, Janet….” Janet quits in the middle of the event. This causes Tammy’s head to explode (the little one, not the big one hanging above the stage).

Tammy’s back-up plan is to make Tina the coordinator, and points out Justin, the cutest kid in Hebrew school. “Tina, I’ve got a wedgie and I’m not gonna pick it at my own party! Janet had small fingers.”

Tina’s really, really good at her new job, prying off clingers and swabbing Tammy’s brow. But when she finds Louise in the giant Tammy head on the brink of pouring guacamole out of the nose like boogers, they both get stuck inside and raised above the terrible band. They pour the guacamole out of the nose in the hopes that someone will see it, but it’s just dribbling and gathering above Tammy’s big mouth.

With Tammy gone Tina kicks off the limbo event. Next, the conga line. “Grab on, let’s go!” And what goes better with a conga line than the Macarena? Maybe the Chicken Dance. And with Tammy taking “Tammy Time,” Tina does the bread blessing and Louise notes that this is like a reverse It’s a Wonderful Life, with Tammy getting to see how much fun everyone’s having without her shrieking at their face.

With Tammy crying, Louise magically fixes the headset and calls Tina for help. But next on the schedule is “Ladies Choice Dance With Justin,” and Tina’s a psycho who wants to stay on schedule. “The hand wants what the hand wants, I can’t tell where the back ends and the butt begins.”

The Tammy head is eventually lowered and the jig is up. Mazel tov, Tammy!