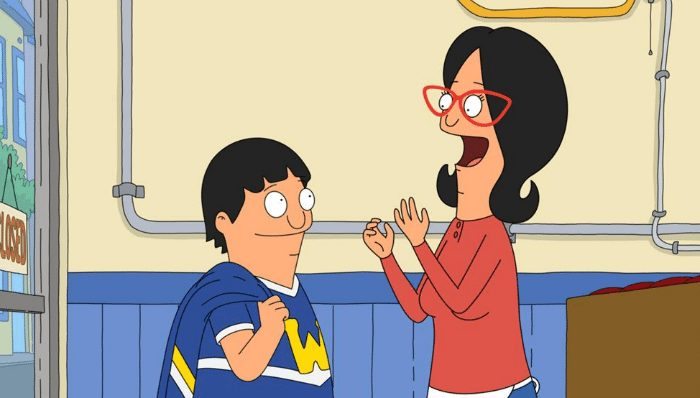 Tina is trying out for cheerleading using the mop head and Gene’s Rasta wig. She’s really excited about it because the cheerleaders are so close to the wrestling match that they are in the splash zone. “By the way, in a cartwheel are your hands or your face supposed to touch the ground first?” And with that, Louise and Gene make time to watch cheerleading tryouts.

Tina’s cartwheel lands her face-first into the judge’s table. Gene cheers so loudly that he is recruited for the team, which is totally okay with Tina, who bit her tongue and can’t really talk well enough to protest the injustice. Or, as Louise says, “Tina flew too close to the floor.” Linda is very excited about Gene being a cheerleader and gives Tina a bag of frozen peas to suck on. Louise decides to be Tina’s interpreter during her incoherence.

“Gene, two-man pyramid, NOW!” When Todd takes a “cheer break,” Gene gets a solo. He’s a big hit, and I think this cheering thing has unleashed a new Gene. Oh! Cheer battle! For the King Of The Yells! Gene issues the death blow, and Todd is left alone on the playground to plot his revenge. 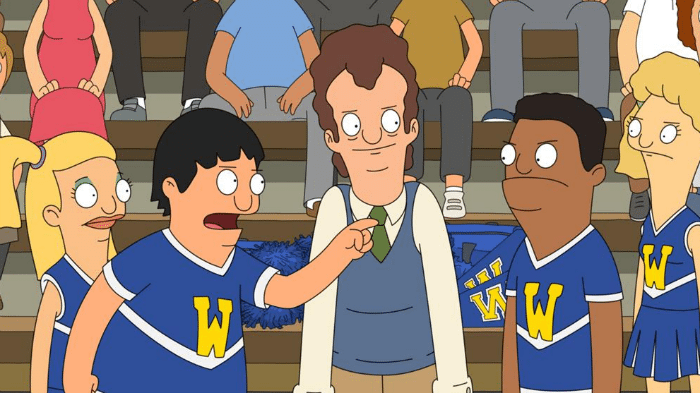 Louise negotiates a date for Tina at Pie In The Sky, a revolving dessert restaurant, and she’s coming with them because when Tina’s lips are flapping, there’s no time for napping. Back at home, Linda arranges the G.I. Joes and Barbies into a cheer pyramid and drives Gene nuts with her attention. This turns Gene mean, which just proves that cheerleaders are the worst.

The cheerleading coach encourages Todd to get dirty, and Todd enlists the head wrestler to purple nurple Gene. But he’s not caving so quickly and refuses to quit the team. This is a good thing because the team made the finals of something-or-other and need a new cheer. By tomorrow. Gene decides they should do “cheerbots,” which is either crap or genius. Unfortunately, another team had the same dumb idea. And they’re up first. 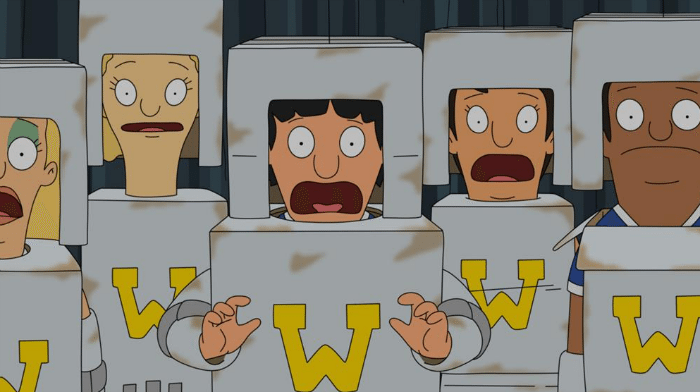 Tina hates her date, but it ends in a kiss that makes Louise vomit. Luckily it’s a revolving restaurant so nobody will ever know who did it.

To save their cheer, Gene constructs a giant tower just like the one Linda made with the G.I. Joes and Barbies. They collapse on their cheer advisor and totally got last place, which comes with a trophy.