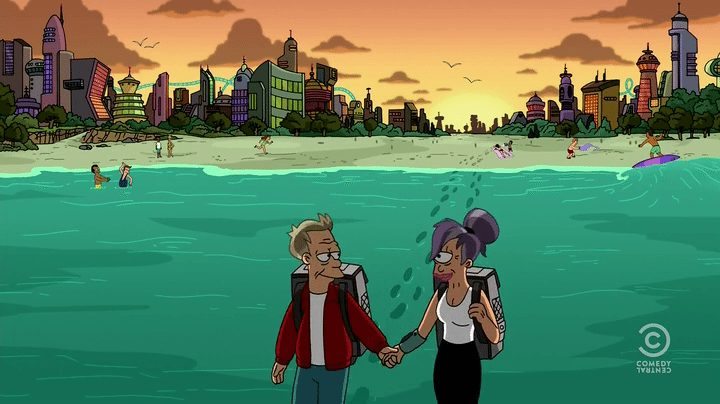 The Planet Express heads to Luna Park, which is where Fry and Leela had their first delivery. Fry, Leela and Bender try out the rides, an Bender loses his nuts and bolts. This sends Leela flying out of the glass-enclosed Moon dome thing-a-ma-bob. She’s dead. Wait, no. Not so dead. She has been breathing the air from a balloon animal the whole time. Because Fry can’t imagine his life without Leela, he plans on asking for her hand in marriage.

Farnsworth invented a button that sends the whole universe ten seconds into the past. To test out the button, he crams everyone into his time shelter, to shield them from the button’s effects. Leela asks if he can send people back in time as much as they want by pressing the button over and over. Sadly, it’s not possible since the button takes ten minutes to recharge.

Fry and Bender borrow the button to steal some diamonds for Leela’s engagement ring. Real classy diamonds that will make her “crap her pants.” Fry takes Leela out for brunch and says that the next time she almost dies, he wants it to be as his wife. The ring is hidden in a giant clam which chomps off Leela’s hand. Luckily he has the button handy and sends them back ten seconds so he can stab the clam into submission before she reaches for the ring. “Fry! This is all so sudden, after thirteen years!” He then tells her that if the answer is yes, he should meet him at the top of the Vampire State Building so that he can make the sunset last as long as possible.

When Leela doesn’t show up at the appointed time, Fry jumps off of the building. On his way down, he sees Leela heading to the entrance, admiring her ring. He also sees a clock and realizes that she’s not late after all, it’s just that his watch kept running every time he pressed the button. To remedy the whole plunging to his death thing, Fry pushes the button again. But he has been freefalling for more than ten seconds, so he gets stuck in an endless loop of horror.

When Farnsworth realizes that the button has been stolen and someone has been pressing it every ten seconds, he orders everyone into the time shelter. They can’t leave because of something about the button being pressed less than ten seconds later and not getting sent back to the right spot and tearing and ripping through time. Bender confesses that he knew it was Fry who stole the button. They scootch on over to the Vampire State Building without ever leaving the time shelter so that they can save Fry. Unfortunately, Fry fell asleep while plunging towards the earth and lets go of the button. Splat. Big splat. Big, messy splat. When the button hits the ground, Leela grabs it and presses it to save Fry. But Farnsworth is outside of the time shelter and…something about being shredded.

So now Leela and Fry are in an endless loop of Fry plunging to his death, splattering all over the sidewalk, and Leela sending him back into a freefall with the push of a button. “You know those dreams where you’re falling and right before you hit the ground you wake up? Those are great!” Bender devises a plan to run out there and save Fry with his airbag. It works, until Fry lands on the button and it freezes everything in the universe except for Fry and Leela. Oops.

Fry and Leela wander through New New York, taking whatever they want (including those earrings Amy borrowed and never returned). When Fry proposes again, Leela says that she would marry him even if he wasn’t the last man on earth. So they go to sleep on pandas in the zoo, with koalas as pillows. Because they can.

The next day, the happy couple assembles all of their frozen friends in a church and exchange vows. They go on an endless honeymoon, growing old together in a frozen world, the only two still-moving people on earth. And when they are anciently old, they drink the champagne they were supposed to enjoy back when the world still did all of the things it is supposed to do.

Then, a buzzing glimmer of something-or-other turns into a time portal. Out walks Farnsworth, who has been searching for the time button the whole time. Fry hands him the smashed time button in a plastic baggie, and Farnsworth fixes it in no time flat. He then zaps everyone back to the instant before he invented the time button, and Fry and Leela live their lives all over again.

All images via The Infosphere