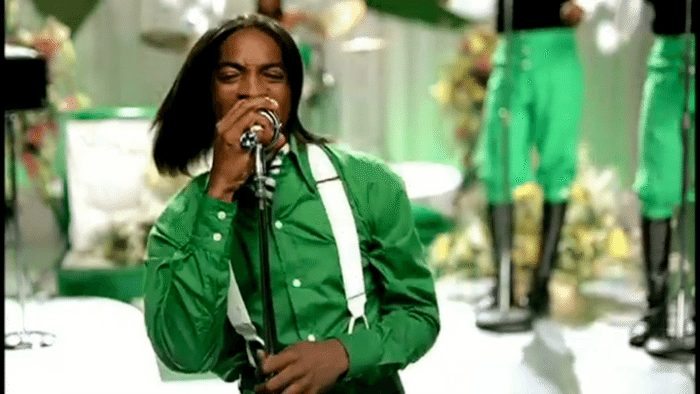 Throwback Thursday is your weekly concentrated dose of nostalgia, where we round up the bests and worsts of all things 90s, early 2000s, and basically everything that made our youth the greatest. This week: The 5 8th grade dance songs.

Ah, 8th grade.  The peak of everyone’s awkward phase—which I am still hoping to grow out of.  Math class hasn’t yet gotten too confusing, you get to dissect a frog in science, and the most complicated literature you’ll read is The Diary of Anne Frank.  And of course, hormones are raging.  So why not throw all of those hormonal tweens and early teens into a dark, hot gym to dance to music with seemingly questionable lyrics? That’s right, folks, this week I’m talking about the music of 8th grade dances.  Or at least the music that I would have heard playing at my 8th grade dances in 2005, if I had actually gone to them.  Regardless, for all of you Holla Back Girls who were dropping it like it was hot at age 13, this one is for you—consider it a birthday gift, cause we’re gonna party like it’s your birthday, Shorty:

This is a song that I like to put in a genre of music that I call “Club beatz”, and there is a lot of love in this club.  I’m not actually positive of what’s going on in it, or what any of the lyrics mean—but that’s probably because the whole thing is basically the word “yeah” repeated over and over again.  And, while I may not be the biggest Usher fan, I’m pretty sure he’s a musical genius on the basis that he was able to produce a chart topping song that is basically 90% “yeah” and 10% Ludacris saying the word “conspicuous” at one point.

So.  True confessions right here.  I cannot stand Avril Lavigne.  But, I LOVE THIS SONG.  I don’t know why.  It’s not even that great.  BUT IT IS.  It’s catchy and awesome, despite the fact that everything Avril does is literally the most annoying thing on the planet—and I’m not going and making things so complicated, that’s just a fact.  But this song basically started the scenester movement.  After the music video, I’m pretty sure all the 8th grade punk-rock wannabe girls started wearing dark eyeliner and hats.  Avril is married to the lead singer of Nickelback now, Chad Kroeger. Is he the sk8er boi in this song?  Somehow it makes sense that the two of them would get together; now they can have offspring that put their combined lack of talent together to produce even more horrible music.

This song didn’t exactly come out when I was in 8th grade, but I’m pretty sure you can’t have a dance without playing it—which is excellent because I love doing the Macarena.  Not gonna lie, I sometimes put it on when it’s just me getting ready for the day.   Dancing to the Macarena is basically the most fun a person can have ever.  Plus, I’ll never forget the time that I learned how to do the dance.  I’m not joking; this is a real story: In kindergarten, the only Hispanic kid in my class—and at the time, probably in the school—Pablo, taught us all how to do the Macarena during show-and-tell.  I cannot make up that level of racial stereotyping; I grew up in the suburbs of Connecticut.

I’m pretty sure that everyone went through a Yellowcard phase in 8th grade.  I also remember that everyone loved this song.  It was very pop-punk, sort of Blink-esque plus a violin. Point being, Ocean Avenue was like everyone’s jam, which is why I’m always a little surprised that Yellowcard basically dropped off the face of the music scene.  Like, at least Avril went and got married and people still talk about her, even though her music wasn’t that good.  Yellowcard, what happened to you?  Everyone liked you, where did you go?

I’m pretty sure it goes without saying that Outkast is the best, this song is the best, and there is nothing that I don’t love about it.  This is my actual third favorite song ever—and I listen to a lot of music, so that’s pretty impressive.  Even my parents love this song.  When it came out, my dad used to make us do a “Hey Ya! Search” on the radio, which consisted of us scanning through every station until we found it playing somewhere.  Also, the music video is excellent.  There basically 3000 green Andre 3000s in it, and I like the subtle parody of the Beatles performing on Ed Sullivan.  And of course, they coined the catchphrase, “Shake it like a Polaroid picture.” “Hey Ya!” is basically musical perfection.

What was your middle school jam?