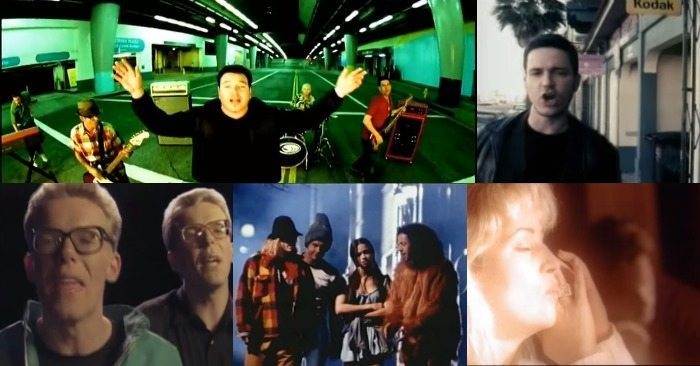 Hello, readers! I’m sure you’ve all missed me lately (all four of you, two of which are my parents).  I’ve been off enjoying a little vacation time in honor of America’s birthday.  In case you haven’t noticed yet, we are officially in summertime—someone tell Lana Del Ray to put her red dress on tonight.  Of course, summer means ice cream, lounging by bodies of water, and backyard barbeques, but most importantly; summer pop hits.  Recently we’ve had quality soundbites such as Robin Thicke’s Blurred Lines, and Carly Rae Jepsen’s Call Me Maybe—both of which I do love and do know all the words to, go ahead and judge me.  But let’s not forget about some of the best ’90s summer hits—five of which I am about to countdown right here in this blog post for your entertainment!

Wait, Third Eye Blind has songs other than” Jumper”?! All I really remember about this song is that like half of the lyrics are the words “doo doo”.  Heh heh heh, he said “doo-doo”.  The other half are about the lead singer becoming addicted to drugs.  So, you know, exactly what you want your kids to grow up listening to at summer camp or a backyard barbeque.  Maybe the parents of the ’90s kids should have put on some Hanson instead, because the extent of Third Eye Blind’s lyrical content (to my limited knowledge) seems like it’s primarily about suicide, drugs, and maybe also poop.

“Don’t Turn Around” by Ace of Base

This is just another quality song from the group that brought us all the classic pop hit, “The Sign.”  Don’t deny that you love that song.  I know you do.  You can’t lie to me.  But am I the only one that’s seen the music video for “Don’t Turn Around”?  If you haven’t seen it, I can tell it to you in about five seconds: the whole thing is literally people looking off into the distance either out a window or on a beach.  Also, they lay miscellaneous possessions from their pockets (mostly seashells) in front of them—hey, maybe that’s where James Blunt got the idea for the “You’re Beautiful” video.

“Run Around” by Blues Traveler

Everybody loves a good harmonica solo.  Like, I’m pretty sure this song is really just a vehicle for that harmonica. Plus the video is a loose adaptation of The Wizard of Oz.  Only in this one Dorothy is a little more scantily clad.  Seriously sweetie, I highly doubt your mother let you out of the house like that, pull your shirt up and your skirt down, children of the ’90s are watching this video!  Also you call yourself Dorothy but your pigtails aren’t even braided!  Judy Garland would be appalled!

All Star by Smash Mouth

I heard this song recently and was immediately judged for my love of it.  And probably for the fact that I definitely still know all the words.  Also, real talk, I’m pretty sure the only reason I love it so much is because it was on the Shrek soundtrack—and aside from Matilda on tape, that soundtrack was literally the only thing we listened to on family car rides for like a solid 5 years.  I’m not ashamed! Unfortunately now when I hear this song it just makes me feel old—well the years start coming and they don’t stop coming!

So, this is one of my favorite songs ever.  Come on.  What girl doesn’t want a semi-stalkerish nerdy Scottish dude to sing this to her?  No but seriously, this is a great song.  It’s on my list of possible wedding songs.  It also raises a serious question: what would you walk 500 miles (and 500 more) for?  The Proclaimers would do it for a girl, but I’d probably walk that far for like a really good pizza.

What is your favorite ’90s hit?