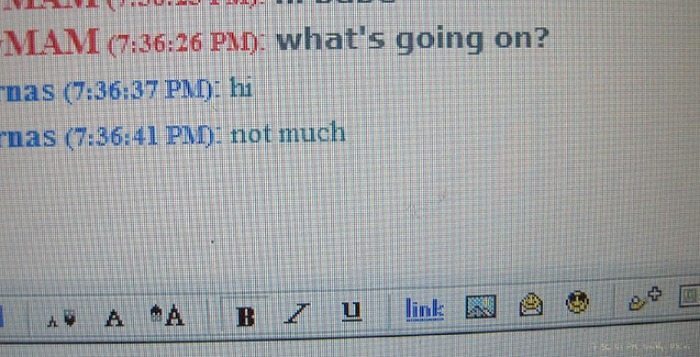 Throwback Thursday is your weekly concentrated dose of nostalgia, where we round up the bests and worsts of all things 90s, early 2000s, and basically everything that made our youth the greatest. This week: The 10 things we miss most about AOL Instant Messenger.

The greatest part of my day in middle school and high school was coming home from a long day of class only to sit down at the family desktop computer (in the computer room) go online (hello, dial-up) and sign on to AOL Instant Messenger. While I’m grateful that social media and messaging have evolved exponentially from the days of away messages and Myspace selfies, I still find myself reminiscing about my AIM days.

There was nothing quite as satisfying as organizing your buddy list. Some people (AKA boys because they were lazy) didn’t bother to create organized lists of their friends, but you weren’t truly an AIM aficionado until you did. The default buddy list had 3 categories: Friends, Family, and Co-Workers. The buddy list of a true AIM-obsessed tween looked more like this:

Your buddy profile was a place where you had full creative freedom to use whatever fonts and background colors you wanted. You could post as much information about you (like your A/S/L) as you wanted, any way you could imagine. But, most people used it for 5 things: 1) posting song lyrics, 2) ASCII art, 3) your best friends’ intials, 4) inside jokes with said best friends, and 5) a list of your likes and dislikes.

Much like we post our relationship statuses on Facebook (and they’re not official until you do) it was important to stake claim in your boyfriend or girlfriend via your aforementioned buddy profile or your away message. Adding your relationship status to your buddy profile was way more official feeling than Facebook ever will be, and when you and your significant other broke up? Everyone noticed. Facebook doesn’t even notify people when you become single anymore, and unless you’re posting overly dramatic Facebook statuses (you shouldn’t be) then some people might not even notice. But everyone, and I mean everyone, noticed if it was missing from AIM.

It was annoying when other people signed on and off, prompting your computer speakers to cry out awful sounds of doors creaking open and slamming, but you were willing to look past the awful sound because you knew how useful it was. If your crush signed online and you wanted to talk but didn’t want to initiate conversation? *Door slam* *Door open* *Door Slam* *Door open* — are you catching my drift? It was a surefire way to get noticed.

You probably used all of these emoticons at one point in your AIM phase. My best friend always used the pale blue ones (top row, second column) whereas my ex boyfriend used the flat blue ones next to them. I was a big fan of changing it up, and my favorites were the card suits and the sketchy looking ones next to them. When I was feeling particularly cheery? The daisies, duh. Whatever your mood, there was an emoticon set to perfectly describe it. The default AIM smileys were for losers, anyway.

AOL Instant Messenger users who felt stifled by the platform’s lack of customizability turned to an extension called DeadAIM. It gave users the ability to keep all their chats in one window (organized by tabs) and the option to clone AIM, making signing on with different screen names at the same time a possibility. It also let you log all of your IMs so you could save those messages from your crush forever. Basically, it allowed you more opportunities to be an internet stalker while you pretended to be a computer whiz.

Do your eyes hurt from reading those? Yeah, mine too. All of those were AIM icons I made throughout the years. On display, from left to right, we have lyrics to Christina Aguilera, Dashboard Confessional, and Maroon 5, a quote from The Virgin Suicides, that time I started experimenting with really tiny photos, and last but not least, what I am pretty sure is a quote I made up. I actually have no idea where that came from, but a quick Google search turned up nothing. Yay, creativity.

I took great pride in my AIM icon creations and often made custom ones for my friends. This meant hours of painstaking mouse clicks in MS Paint, making each frame one at a time, and then animating them. Those of you who also made icons remember the great joy (and frustration) they gave you. 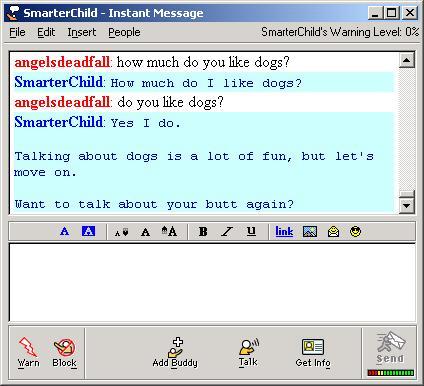 AIM bots were your real friends. They were always there for you no matter what time of day or night it was. They told you jokes. They asked about your day. And sometimes, they even told you the local movie times! That’s more than my bestie does for me now. SmarterChild was the best of the bots, and the most fun to mess with. This was a common occurrence at sleepovers: order pizza, talk about boys/girls, play Neopets, and try to get SmarterChild to say inappropriate things.

9. Changing your screen name every month

I couldn’t even tell you how many screen names I went through over the years. The formula for coming up with the perfect screen name (that you swore to your friends you wouldn’t change again but did anyway)? First, you had to pick a route: personal, fun, or deep? If you went the personal route, your SN was some form of your name, nickname, or hobbies, usually accompanied by x’s and o’s and/or random numbers. A real screen name I had, as an example: x bAbiE bRit o (I am so ashamed) and an example for a boy: sk8erdude107. You could go the fun route and come up with something cute or clever, or, you could go the deep route with song lyrics or just generally sad-sounding things. Another real example: brokn heartdx (y’all can guess which route I took.)

NVM not going to ice cream. Here for a bit then pizza with my girls. cells hot if you r

Few things in life compare to away messages. It’s socially unacceptable to post every last thing you do on Facebook (and slightly less so, but still, on Twitter) and Instagram requires you to post images. Away messages were the only place on the internet where you could truly just be yourself. And by be yourself, I mean try to sound cool for all your friends.

Now that I think about it, I guess social media hasn’t evolved all that much, after all. But AIM was still the best.

What do you miss most about AIM?