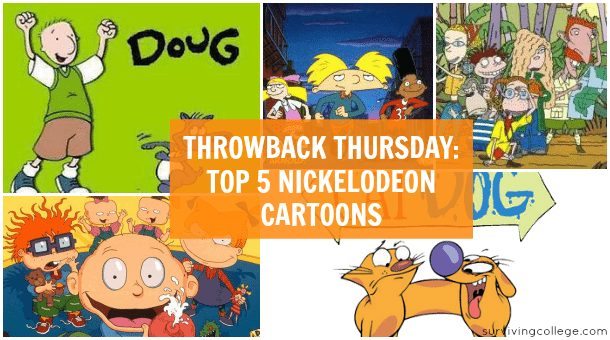 Throwback Thursday is your weekly concentrated dose of nostalgia, where we round up the bests and worsts of all things 90s (and the early 2000s.)  This week: the top 5 Nickelodeon cartoons.

Before we watched 30 Rock and Glee—I mean, what? I’m not still watching Glee, who said that? What are these ridiculous accusations?!—and all of the other greatest hits of NBC and Fox, we were watching people getting slimed on Nickelodeon.  Some of the most memorable characters and quotes of our collective childhood stems from great shows like Rocko’s Modern Life, Rocket Power, and even the one and only krabby patty flipping Spongebob Squarepants.  Sure, some of them might have been a bit odd, and even terrifying at times—it’s thanks to the only episode of Courage the Cowardly Dog that I ever saw that I have an inexplicable fear of watermelon—but still, they defined a significant part of our lives.  So this week, I’m counting down the top five Nickelodeon Cartoons.

Do you like cats?  Do you also like dogs?  Do you want your cat and your dog to be friends?  Do you want your cat and your dog to be the same thing?  Well, then this show is the show for you! I will not deny CatDog was a great show, but like, what the hell were they thinking when they decided that the premise of a quality television program would be a conjoined cat-dog twin?  For some reason the concept of a catdog creature freaked the crap out of me.  I also have some very important questions that never got answered, most importantly: How does CatDog poop? Also, where were CatDog’s parents?  Clearly the producers of this show did not realize that it touched upon some major issues like parental abandonment.  But mostly it just weirded me out.

I can honestly say that Rugrats is the show that made me realize that I don’t want to be a mom, especially not to anyone like Angelica.  But seriously, these kids get into so much trouble! And why do the parents never seem to notice what’s going on?  I feel like most parents are not that oblivious.  I’m pretty sure if I got up to any of the shenanigans that went on in Rugrats, my parents would be on that like white on privilege.  I am a little jealous of their toys though.  I’m just being honest, Reptar is probably the most bad ass toy ever.

Forget Batman.  Mostly because Batman isn’t a real superhero at all, he’s just some glorified vigilante with gadgets. They should really just call the series “Alfred” because Alfred is the only one who gets anything done.  But really, forget Batman, because Eliza Thornberry had the coolest of all the super powers.  Who doesn’t want to be able to talk to animals?  But forget the fact that the premise of the show is an eclectic family traveling around in a camper to film animal videos, and that the protagonist talks to and goes on adventures with the animals, because what’s really important about the show is that TIM CURRY is the voice of Nigel Thornberry.  That’s almost as awesome as the fact that Kevin Bacon is the voice of Balto.  But seriously though.  Tim.  Curry.

Hey Arnold is the show that had all of us 90s kids asking the question “Long plaid shirt or kilt?”  And, I’ll just be honest, I’ve built a bubble gum shrine or two in my day—I’m still waiting for you, John Dabrowski! …Kidding…sort of.  But seriously, a lot of great characters and memorable moments came out of this show.  “Stoop Kid’s afraid to leave his stoop!”  I will always remember the moment when Pigeon Man flies away into the distance.  While I may not have really identified with any of the kids of PS 118 (except for maybe Phoebe because of her brown hair and glasses), I appreciated the depiction of life in the public school system and the classic character tropes.

I’m not even going to make snarky comments about Doug because that show was just straight up awesome.  Quail Man is one of the greatest Halloween costumes ever.  Porkchop is a good dog.  Skeeter is the most hipsterrfic best friend, with his skateboard and his signature honking sound effect.  Judy is the classic pretentious artsy sister.  And of course, Doug’s never ending quest to get the attention Patty Mayonnaise (but not her super annoying friend Beebe).  But another awesome thing about Doug was the songs. Of course, there were the hits by The Beets, a reflection of the world’s greatest band ever in existence, The Beatles.  Killer Tofu is on my iPod to this day.  I’ll be honest, I still listen to I Need More Allowance on occasion. And, I won’t lie, sometimes I find myself starting papers that I struggle to write with the simple phrase, “Silt is…”

What were your favorite Nickelodeon cartoons? Tell us in the comments!
Next week on Throwback Thursday: The Top 5 90s School Supplies