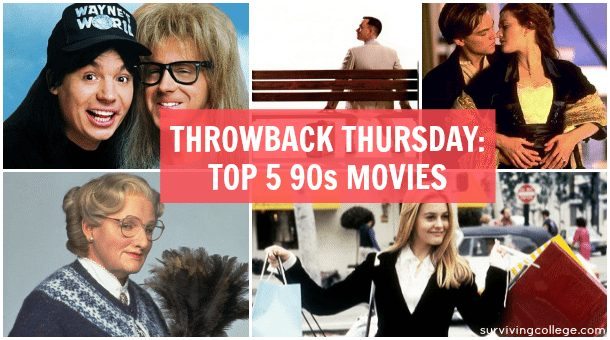 Throwback Thursday is your weekly concentrated dose of nostalgia, where we round up the bests and worsts of all things 90s (and the early 2000s.) This week: the top 5 90s movies.

I’ll be honest, I’m a complete and total cinephile—I’m Michael Bolton in the Lonely Island level.  And sure, I love the contemporary films of today which usually feature Katherine Heigl having sexual tension and Bradley Cooper being an attractive jerk, but my favorites are the classics of my youth. Don’t deny that you love them too.  Whether you were watching Macaulay Culkin set traps in Home Alone, Jeff Goldblum being Jewish and fighting off dinosaurs in Jurassic Park, or Ben Stiller getting inducted into Robert Dinero’s “circle of trust” when he met his girlfriend’s parents, you were also watching some of the greatest movies of the 90s.  These movies had everything you ever wanted and also probably Mary-Kate and Ashley Olsen (which deserves a post all on its own).  So, if you haven’t guessed it already, this week I’m counting down the top five 90s movies.

I’m not going to lie to anyone here, because it’s the internet, and nobody lies over the internet, but I’m fairly positive that Mrs. Doubtfire is the best break-up movie ever.  I don’t care what anyone says, when I feel downtrodden and rejected by love, I pop in my Mrs. Doubtfire DVD and let Robin Williams heal my heart! So take that, Tyler Perry’s Madea franchise, Robin Williams did it first—and probably also best.  Mrs. Doubtfire may go down in the history books as the best of Robin Williams in general—sorry, Flubber, Aladdin, and Dead Poets Society.  While this movie may not be your classic When-Harry-Met-Sally style romcom, it’s still a hilarious romantic comedy of sorts about a dysfunctional family trying to work things out—what child of the 90s couldn’t relate to that?  And, if the movie wasn’t awesome enough already, it also has cameo appearances by Harvey Fierstein.

Before Regina George was Queen Bee of girl world in Mean Girls, there was Alicia Silverstone as Cher.  This movie coined the classic catchphrase we all love to hate, “As if!” and really brought “Whatever!” back to the vernacular.  And now, allow me to put on my literary thinking cap for a minute.  While this may seem like your typical satire on the lifestyle of a ditzy American teenager of the 90s, it’s actually much more.  Clueless is a contemporary adaptation of Jane Austen’s Emma.  Is your mind blown yet?  10 Things I Hate About You is an adaptation of Shakespeare’s Taming of the Shrew.  Obviously film adaptations of classic works were a big deal in the 90s.  But basically, there’s more to Cher than meets the eye.  If you do a close analysis of the film—not that I have or anything—you’ll see that Clueless really touches upon some important ideas, especially with regards to class structure and gender roles.  Not so clueless anymore, is it?  Also, did I mention that my future husband, Paul Rudd is awesome in it?

The bromance is a staple in many great American movies—such as The Hangover.  But the first great bromance is definitely that of Wayne and Garth in the classic cult comedy, Wayne’s World, and it is “totally! excellent!”. Not a Friday night goes by where I don’t say, “Party time! Excellent!” On top of the awesome catchprhases, the characters of the movie originated from their hilarious SNL sketch.  Also, Rob Lowe playing the jerk in this movie is fantastic—is that even acting for him?  Basically, there should be more movies in this world like Wayne’s World and less of everything else.

Clearly, nothing says maternal figure of the 90s like Sally Field.  But on a serious note, this movie is one of the greatest pieces of American cinema ever created, and I want to give it the proper homage it deserves.  Tom Hanks is known for his prolific movies—just look at Toy Story and Big—but Forrest Gump is without a doubt his finest. Don’t believe me? Just look at the range of the film.  It has everything in it: Vietnam War, park benches, a box of chocolates, John Lennon, the smiley face, floating feathers, shrimp, shrimp kabob, shrimp creole, shrimp gumbo, jogging, ping-pong, the army, the Olympics, sex, drugs, and rock ‘n’ roll, peaceful protest, letter writing, guitar playing, Lt. Dan, Lt. Dan’s legs, boats, and probably more.  There are very few things that this movie doesn’t have.  My mama always says that the movie Forrest Gump is like a box of chocolates, you never know what you’re gonna get.

As far as a movie goes, this one has everything anyone could ever want: Leonardo, Kate, romance, action, and an epic ballad by Celine Dion.  Plus Kathy Bates being sassy, Billy Zane flipping tables, and Kate getting painted like one of Leo’s French girls.   But, what’s really important is the ending, when there’s no room for Jack on the plank.  Um, really though?  There really wasn’t enough room for both of them?  Okay.  So, I’ll take that as the truth.  But then, she couldn’t at least offer to move over?  You know how when a boy and a girl are on a date, and the boy is obviously going to pay, but when the check comes, the girl plays the “check dance,” where she offers to pay for herself, and then the boy says no that won’t be necessary, and she says she really must, but then he insists on paying for her?  And both of them know that he was always going to pay in the end, but they still played this little game for the façade of basic manners?  Well, the ending of Titanic is should have been kind of like that.  She didn’t even offer! Rude! I thought she grew up in high society and learned the importance of politeness!

What were your favorite 90s movies? Tell us in the comments!
Next week on Throwback Thursday: The Top 5 90s Nintendo Games