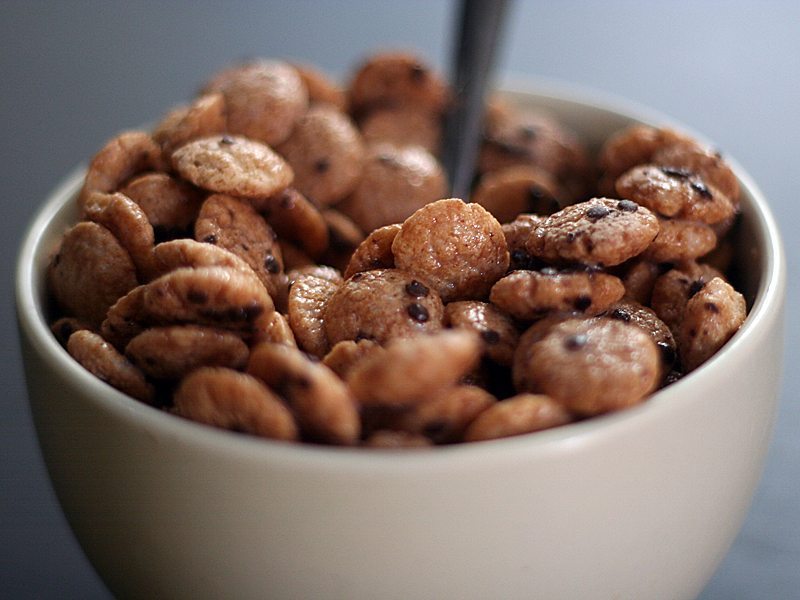 Throwback Thursday is your weekly concentrated dose of nostalgia, where we round up the bests and worsts of all things 90s (and the early 2000s.) This week: The top 5 breakfast cereals of our youth.

While breakfast is commonly thought of as the most important meal of the day, in the on-the-go-era, us young professionals (yopros) don’t always have time for a leisurely meal before we head off to work or class, and usually end up snarfing down a granola bar or a banana as we run out the door with our eco-friendly thermos full of overly sugared-coffee.  However, this was not always the case.  Back in our elementary school days, our Mom’s always made sure we took the time to eat a breakfast. And while I was stuck eating lame “healthy” cereals like Berry Berry Kix or Life, other kids got to have Lucky Charms or Captain Crunch.  So, in honor of all of us that were cuckoo for CoCoa Puffs, and knew that Frosted Flakes were more than good, I’m counting down the best breakfast cereals.

You wake up in the morning.  You are hungry.  That last chocolate chip cookie from the night before is still sitting out on the kitchen counter.  All you want to do is pour yourself a big glass of milk, dunk the cookie in, and eat it.  But you have morals, and eating cookies for breakfast just doesn’t quite fit into your code of ethics! Thanks to Cookie Crisp cereal, you can justify your choices.  While the parents in the commercial might question this cereal’s status, suggesting that Cookie Crisp is essentially eating cookies for breakfast, Chip the Dog, the cereal’s mascot, would offer them a sample, upon which they would realize how delicious Cooke Crisp actually is, and their minds would be forever changed.  Then of course everyone would cheer and Chip would let out his usual howl, which seems a bit Tony-the-Tiger-esque, “Coooooookie Crisp!”

For some reason things coming in “puff” form was a big deal.  CoCoa Puffs, Corn Puffs, and of course the classic Reese’s Puffs.  If we could justify cookies for breakfast, candy was just the next step, and it’s really just a slippery slope, it is only a matter of time until we reach the point where we’re essentially just feeding kids sugar cubes for breakfast.  Of course, nothing really compares with the slogan of this cereal, “It’s Reeses…For Breakfast!” …yes…yes it is.  What a vivid description of your product.  Nobody could have figured out what this was without the explanation.

Well, at least this cereal is at least making an effort to be nutritious, although I’m not quite sure how much “apple” is actually in Apple Jacks. While Apple Jacks were originally just the red-orange circles, in the 90s, the brand added the green circles as well, which almost felt like Apple Jacks was trying to diversify itself.  Green apples are apples too, they deserve to be included! When does yellow get added to represent Golden Delicious?! I’m convinced that cereal slogan writers were not getting paid enough, because the slogan for Apple Jacks was almost as ridiculous as the one for Reese’s Puffs.  The kids in the Apple Jacks commercials proudly declared, “Apple Jacks…We eat what we like!”  Do you?  Do you really? Do you really eat what you like?

Originally called “Sugar Smacks”, which was just a little bit too obviously unhealthy, Honey Smacks are essentially just sugar puffs.  They are represented by Dig’em Frog—although I’m not exactly sure why the mascot is a frog, I wasn’t aware that frogs like honey.  But I guess Honey Nut Cheerios already took the bee mascot.

A breakfast cereal that represents an actual breakfast food?  What a uniquely novel idea!  What’s next, actually eating a healthy breakfast?  Slow down, don’t get crazy! The slogan, naturally, was a bizarre as all the other cereals.  An adult in an unusual profession (for some reason I remember one of the commercials being about a lifeguard) would take a look a the cereal and then declare, “The taste you can see!”  Because, little kids are confused enough about the world, so why not make your slogan mess with their idea of sensory perception?  The taste you can see.  That’s not how it works!  But of course, all the kids in the commercial would proudly exclaim, “It’s the cinnamon sugar swirls in every bite!”  So, thanks to all the sugar in the cereal, your sensory perception goes haywire and you can start seeing flavors.  But at least it’s breakfast-y seeming.

What was your favorite cereal in the 90s?