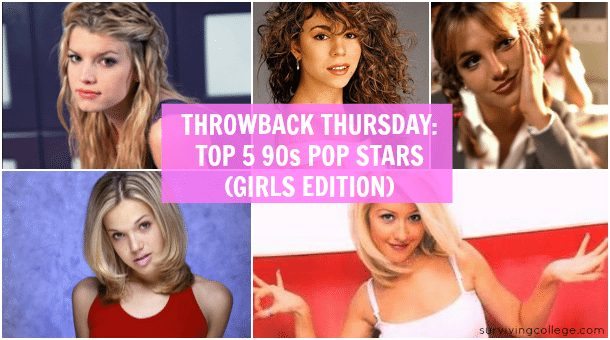 Throwback Thursday is your weekly concentrated dose of nostalgia, where we round up the bests and worsts of all things 90s (and the early 2000s.) This week: the top 5 90s pop stars (girls edition.)

As a kid who loved to sing and did so at every possible opportunity, the female pop stars of the 90s were so my jam. My best friend and I would sing on the phone with each other. We tried to get on MTV’s Made. I wish I was kidding. I would be lying if I didn’t just up front admit that my childhood admiration for Christina Aguilera was more like a full-on obsession. I watched re-runs of the Mickey Mouse Club with her and Britney Spears and Justin Timberlake and Ryan Gosling and yes, even Keri Russell (who everyone always seems to forget about.) I wanted to sing like Mariah Carey and be best friends with Mandy Moore and Jessica Simpson, too. My proudest moment was when my grandma bought me a karaoke machine for Christmas and I would wear unnecessarily sparkly dresses and put on concerts. In my living room. Because I was totally cool like that. Yep. These were my (and everyone’s) favorite 90s pop stars. Oh, and shout out to Celine Dion, ’cause girl could sanggg.

Name a 90s girl that wasn’t jealous of Jessica Simpson because she was dating Nick Lachey. Yeah, we can’t think of one either. Up until they got married and she could no longer tell the difference between tuna and chicken (even though we’re pretty sure that she actually does and that was just a bad reality show moment) I thought Jessica Simpson was awesome. But let’s be real here: who didn’t? She was blonde, beautiful, and she could sing (much like the rest of the pop stars on this list.)

Mariah. Freakin’. Carey. She was effortlessly fabulous in the 80s and 90s and is still as fabulous as ever. The video for “Heartbreaker” (see above) is one of the greatest music videos ever. It is so 90s that it’s almost painful to watch (but only because of the fact that we miss the 90s so much. Can crocheted halter crop tops come back in style? Pretty please?) And there is no denying – every year between Thanksgiving and New Year’s, the only song true 90s kids actually want to listen to (and lose their voice/break their throat attempting to sing along) is “All I Want For Christmas.” I am not ashamed to admit it.

I have a confession to make: I still listen to “Candy” on a regular basis during my daily commute. I think it has become my power song. I listen to it and it just makes me want to dance and feel awesome. And I don’t even care how many people next to me can hear Mandy Moore belting out “Crush” via my headphones. I fully accept my awkward 90s kid-ness. Mandy Moore also had A Walk To Remember and The Princess Diaries (yeah, she was in that. Remember?!) going for her so girls everywhere wanted to be her bestie. I definitely did.

If I could have it my way, this entire post would be dedicated to Christina Aguilera. Top 5 90s pop stars? Christina, Christina, Christina, Christina, and oh, of course, Christina. Admittedly, she was not the most pleasant person to watch on The Voice, but as a dedicated and loyal Xtina fan, I have to forgive her for that. She had so many years of awesomeness prior to that that I can’t help it. I was so obsessed with her, I read biographical books about her and watched every TV special ever made about her. Thankfully, I went to pop star rehab and can now control my obsession better. But in the 90s, I idolized her.

And I still sing “What A Girl Wants” in the shower, so there.

While Christina was undoubtedly my favorite, Britney Spears was basically queen of the pop genre. There’s no denying that one. Every girl wanted to be her, and every boy ever had a crush on her. And we’re not even going to discuss her more cray-cray moments because the fact of the matter is, Britney is still totally fabulous. Her music is fun and “Baby One More Time” is a 90s staple. Britney was and still is the goddess of the 90s. And I honestly have nothing more to say about her because what else is there to say? It’s Britney Spears.

Who were your favorite 90s pop stars? Tell us below!
Next week on Throwback Thursday: Mary-Kate And Ashley Takeover!