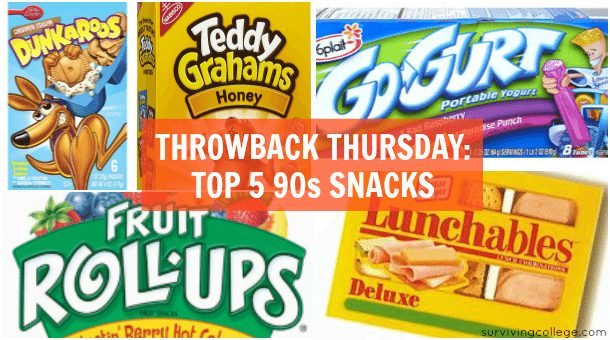 Throwback Thursday is your weekly concentrated dose of nostalgia, where we round up the bests and worsts of all things 90s (and the early 2000s.) This week: the top 5 90s snacks.

It’s late at night. You’re watching some terribly awesome late night TV, probably a Friends rerun, when suddenly, you get a craving for junk food. Now, I’m not saying that’s a bad thing. I eat like Liz Lemon, especially when it comes to “workin’ on my night cheese!” I definitely would identify myself as a cereal—I mean serial snacker. Snacking is my greatest sin. My weaknesses are cheesy pop music and cheese itself (preferably in the form of doodles). Basically, I love food. That passion for junk food had to come from somewhere, right? I blame the 90s and its plethora of sugary, radioactive-colored (remember purple and green ketchup?) munchies. On that note, here are the top 5 90s snacks, best served with those aforementioned Friends reruns.

You know what would go great with these hunks of sugar? If we dipped them into more sugar! As if kids aren’t already hyped up enough already. Although, I do recall never thinking that I had enough frosting. Basically, this snack highlighted a very important theory on the cookie-to-frosting ratio, which is calculated on age. Essentially, children saw the little dollop of frosting as a molehill, thinking that there was barely enough to cover even one cookie, whereas adults always saw that same dollop of frosting as a mountain of sugar that would induce a nightmarish sugar high and an overarching result of diabetes later in life.

Hey, kids, you know that teddy bear you sleep with? Well thanks to the 90s, now you can make him really, really tiny, and then eat him and all of his friends! Seriously, whoever invented Teddy Grahams must’ve had something against teddy bears. I do give them some props for the Elvis jingle, though. In all honesty, Teddy Grahams were just straight up awesome, I still beg my mom to buy them for me when I go home. And yes, I still sometimes pretend to drown them in my glass of milk. (Editor’s Note: SC headquarters is always stocked with Teddy Grahams. Just sayin’)

Lunchables, for the lazy parent. Just how hard is it to put some cheese and crackers in your kid’s lunchbox? Very, apparently. Thankfully, Lunchables provided the solution to harried housewives and frazzled fathers everywhere. Sure, I mock, but I definitely did love Lunchables. The best one was the pizza one. I also remember being particularly excited about the fact that they came with the a Capri-sun – even though I could never get my straw to poke through, those were still the best juiceboxes! Anyone who says otherwise isn’t a true 90s kid.

Fruit Roll-Ups / Fruit By The Foot

I’m not exactly sure how much “fruit” was in either of these snacks, but I do remember my mom always trying to force fruit roll-ups on us as a “healthy alternative” to everything else. (Just assume those are really, really big quotation marks around “healthy”). I also remember that our pantry always looked something like this: a desecrated bag of cheese doodles, a destroyed box of teddy grahams, well-beaten bags of potato chips, and an untouched box of fruit roll-ups. But then Fruit By The Foot came along, and suddenly eating fruit roll-ups became like, a game or a challenge. Even though, let’s be honest – they tasted exactly the same.

I think that laziness was just a reoccurring theme when it came to food and the 90s. Like, how difficult was it to use a spoon? Are spoons really that limiting? And how often does the case arise that we will need to be mobile while eating yogurt, let alone be performing extreme sports, such as skateboarding like the kids in the commercials, while we eat it? Typically whenever I see people eating yogurt, they are usually just sitting down at breakfast reading the paper, not planning on going anywhere. Bonus – Here’s Ellen Degeneres’ on Gogurt:

What were your favorite 90s snacks? Tell us in the comments!
Next week on Throwback Thursday: The Top 5 90s Movies