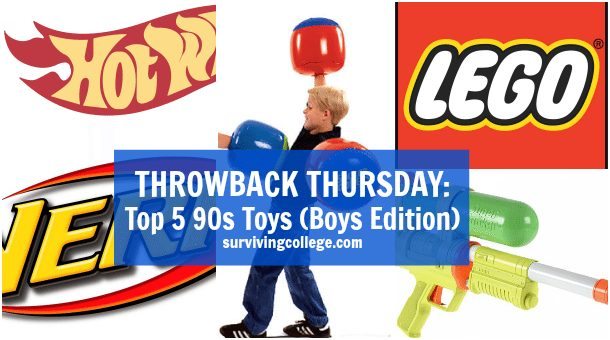 Throwback Thursday is your weekly concentrated dose of nostalgia, where we round up the bests and worsts of all things 90s (and the early 2000s.) This week: the best 90s toys for boys.

Being that I’m a girl, maybe I don’t know these toys as well as I should. Granted, I totally had a Super Soaker (the CPS 1500, to be exact) and like every child, I had a mountain of Lego bricks just waiting to be stepped on. But something about being a boy in the 90s was so totally badass, and I spent most of my time shooting my Sky Dancer at things (yeah, those things can totally be used as a weapon if necessary) and making Polly Pocket ride a horse in circles (totally not badass!) So these top 90s toys for boys were not only popular toys that every boy I knew had, but also the ones I’d wish I had (or truly appreciated) if I had been a boy. Just because.

I mentioned before that I did actually own a Super Soaker. It was totally awesome, and I loved it. The only problem was, I never really got to appreciate its true awesomeness, because I had nobody to play with. The commercials? They make having a Super Soaker look like so much fun! But instead, I used mine to spray…the driveway. Because there was nothing better to do. Honestly, I don’t even know why my parents bought me one. I think I used it twice? Maybe? But, like Nerf guns, Super Soakers are only fun when you have a group of kids with equally awesome Super Soakers to play with (wait, wasn’t that like, an entire episode of Boy Meets World?)

Because, what’s better than pelting your friends with foam bullets that resemble tiny pool “funoodles” (yeah, remember those?) Boys always went crazy for Nerf guns and I always wondered what was so fun about them! Actually, who am I kidding. If your school plays “Humans vs. Zombies” then everyone still goes crazy for them. I feel like if I ever did own a Nerf gun as a child, I would’ve shot them at my dad while he was sleeping. And my mom would’ve thought it was hilarious. Note to my parents: you should’ve gotten me a Nerf gun instead of a Super Soaker…

I, like many others, have injured myself on many a Lego in my day (in fact, it is common knowledge that few things hurt worse than a Lego brick underfoot.) But while I had Legos, I did not have the crazy awesome sets that all the boys had, like the ones in all the commercials. All I ever did with mine was build walls. But pirate Legos?! Hello! Sign me up! Especially when they’re being marketed to me by the younger Pete of Pete & Pete, AKA Nickelodeon star Danny Tamberelli (remember him?) I can see how no 90s boy could resist!

Personally, I never understood the appeal of Hot Wheels cars but I know that 90s boys (and boys today still) went a little cuckoo for toy cars. Hot Wheels was cool because it had crazy race tracks like the one in the commercial above – speaking of which, “Criss Cross Crash?” say that 10 times fast! The truth about Hot Wheels is, they weren’t actually that fabulous, but the advertisers behind it? Genius! The Hot Wheels logo? Fire. The music in the commercials? Kid-friendly metal. Nothing else could make 90s boys feel more tough and cool than Hot Wheels.

Except maybe Socker Boppers (formerly known as Sock ’em Boppers.) All it took was seeing one Socker Bopper commercial, and now I’m 22 and I still think of the song every once in a while. Why? Because it was simple, catchy, and, oh yeah, kids could literally beat each other up and it was “all in good fun.” Let’s pretend this doesn’t promote any kind of violence. Socker Boppers were basically an excuse for kids to wear giant blow up marshmallows on their arms and fight. Look me in the eyes and tell me that doesn’t sound amazing! Just think of how wonderful that could feel during finals week…

Did your favorite toys make the list? Tell us in the comments!
Next week on Throwback Thursday: Our 5 Favorite 90s Board Games