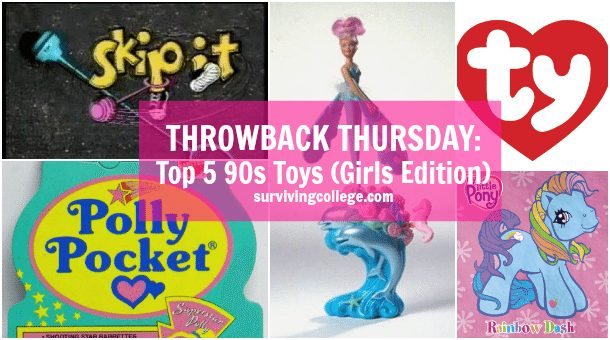 Our newest column Throwback Thursday is your weekly concentrated dose of nostalgia, where we round up the bests and worsts of all things 90s (and the early 2000s.) This week: the top 5 90s toys for girls.

I’ve been excitedly counting down the days until CampusRiot’s first Throwback Thursday post. So excited, in fact, that it consumed my thoughts and I came up with so many topics for it that I actually had trouble deciding what to write about. Then, when I finally decided on the theme of 90s toys, I spent an hour in a blast from the past, overwhelmed by all the choices. I somehow got past the excitement and picked the best of the best girls’ 90s toys (don’t worry boys! It’s your turn next week.)

These were my personal favorites and I know they had to make your list too – they were too awesome not to!

Few things brought me more joy as a child than my hot pink Skip It. I had it (and used it frequently) until I was 12 and it finally broke. I was an only child and lived in a “neighborhood” with very few kids, not to mention I was awful at jumping rope, and could barely ride a bike, so Skip It basically became my best friend – hey, at least my trusty toy never judged me for being so painfully uncoordinated! No matter how many times I tripped and fell over my Skip It, it just kept on counting. If we’re being honest here, it was probably the closest I was ever going to get to being athletic – between my awkward, gangly clumsiness and my asthma, it was all I could manage. Oh well. At least I always had my Skip It.

I have to admit that I was more of a fan of the cartoon, but My Little Pony was definitely a favorite of mine. In fact, probably due to the fact that my mom actually had real horses when I was a kid, most horse-related toys were my favorites. I probably annoyed my poor mother to no end throughout my childhood singing the My Little Pony theme song like it was my job (I did that a lot as a kid) but really, can you blame me? It was so catchy!

If you’re a real 90s kid at heart, you know I don’t mean the newer, bigger Polly Pocket dolls. I mean the original ones that were so tiny that they posed a choking hazard and got lost even easier than Lego bricks and all the beads from your friendship bracelet maker combined. My favorites: the horseshoe shaped Polly Pocket “home” where Polly could ride around the ring in circles (I told you I had a thing about horses) and the underwater clamshell home. Oh, and I totally had the one in the commercial above and loved it. And I definitely spent hours playing with the pull out trundle bed because it confused me. Oh, the things we are fascinated by when we’re kids.

I cannot stress enough how important Beanie Babies were in my youth. They were my everything. I had tons of them, especially dogs (101 Dalmations obsession) one of which I carried everywhere. I loved them with all of my being (so much so that I stuffed them all in the dryer to “save” them when I heard on the weather channel that we had a hurricane warning. Yeah, I wasn’t kidding.) I’m comforted by the fact that pretty much every other 90s kid experienced the same obsessive love for their Beanie Babies. And even more so by the fact that they’re not worth anything now – after all, I did take off all the tags…

Words cannot express how awesome Sky Dancers were. I mean, come on. A beautiful fairy with big fluffy hair that flies up into the air spinning wildly just because you pulled a string? Whoever came up with that deserves a medal! Sky Dancers were the source of hours of fun – I don’t think anyone got tired of their little fairy friends flying through the air (except maybe moms everywhere.) The only downside – having to run to pick them up if they really went flying.

Did your favorite toys make the list? Tell us in the comments!
Next week on Throwback Thursday: Our 5 Favorite 90s Toys (Boys Edition)