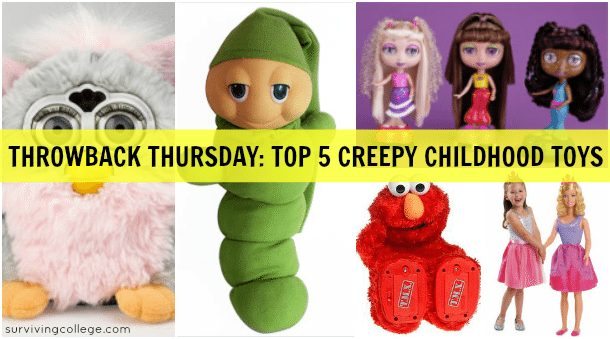 Throwback Thursday is your weekly concentrated dose of nostalgia, where we round up the bests and worsts of all things 90s (and the early 2000s.) This week: the top 5 creepy childhood toys.

Can we all just agree on something once and for all? Dolls are freaking creepy. Barbie dolls, American Girl dolls, all of them. Creepy. But for some reason, dolls (and other doll-type toys) in our childhood reached a whole new level of terrifying that was so awful that some of us, myself included, are still scarred for life. Some of my favorite toys as a kid (but more so the ones that I just had to have and then regretted for the rest of my life) I no longer look back on fondly but rather wonder what it was that made me want and love them in the first place. And then I start wondering what was wrong with me for not realizing how terrifying they were. Others, however, were just plain awful and just the commercials creeped me out (here’s lookin’ at you, Tickle Me Elmo!) But I have concluded that it wasn’t my fault – my childhood mind was just corrupted by the weirdness that was the 90s and I’m comforted by that. Well, as comforted by that as one can possibly be. I guess. Without further ado, these are the top 5 creepy childhood toys that scarred me for life.

I had several Barbie dolls as a child, I will readily admit that. But I never owned a “My Size Barbie” doll. For some reason Barbie just became scary when upscaled from the usual size to 3 feet tall. But, I do have to be honest, as a girl who has been taller than everyone all her life, I think my disdain for My Size Barbie was more so rooted in the fact that no Barbie doll would ever actually be “My Size” and there was literally no point to me owning one. The whole point of My Size Barbie was that she came with an outfit that you could wear, and what might look fabulous on 3 foot tall, curvy Barbie would not be so fabulous on giant, scrawny me. Hence, no My Size Barbie. For that, I am very grateful to my parents – My Size Barbie probably would’ve just made me feel bad about “my size.”

I have to be honest, watching this commercial opened up some old wounds I didn’t even know I had. I also never owned a Tickle Me Elmo, but I did apparently block all memories of the commercials and seeing them in person out of my head. Hearing that terrible, helium-induced, pedophile-esque laugh left me sitting at my desk in a fog with memories of hearing them go off randomly in Toys R Us flooding back into my brain and suddenly I was reduced to a pitiful, horrified shell of my former self. I may not ever recover. I mean, isn’t Elmo creepy enough when he talks? Who thought it would be a good idea to make Elmo uber ticklish and make a doll out of that concept? That person should be forced to live on a deserted island with the toys on this list as their only company.

I have to confess that I did actually have a Glow Worm and I freakin’ loved it. Loved it. I also owned it when I was really, really little, so I guess that’s why it didn’t scare the daylights out of me (pun intended) but looking back on it, all I have to say is, WTF? Glow Worms were these weird half stuffed animal/half doll combos that looked like awkward caterpillars with human faces and a double lazy eye. And it wore a night cap. Why? And lest we forget that its face lit up. Great, so 4-year-old me slept with a giant caterpillar with a human head that lit up. Every. Night. Please tell me I’m not the only one bothered by this.

Did anyone else have the original Diva Starz dolls (different from Bratz dolls, get it together now!) that came out in 2000? All I wanted for Christmas that year was a Diva Starz doll, and my parents made my dreams come true. And I proceeded to spend the rest of 5th grade being traumatized by my “new best friend” Alexa. Alexa told me what time it was like every 5 minutes and her lips glowed when she spoke. Her lips. Glowed. What the actual…Nevermind. Aside from her light-up lipstick, Alexa had eyes that resembled a Furby and permanent purple eyeshadow. She also wore snap-on clothes that didn’t have a back – I could put her in a party dress and the back would still be a tank top and shorts. Yep. Diva Starz dolls wore the doll clothing equivalent of a mullet. And I really hated it when she called me “giggle girl.” Ugh.

I have spent the last 15 years of my life wondering why everyone wanted a Furby. I’ve also spent the last several months wondering why in the world did Hasbro decide, “Yeah, you know what? Furby was a great idea in 1998 and it’d be even better in 2013!” No! Furbys are already beyond evil. They speak some sort of crazy Parseltongue devil language that nobody can understand and somehow they still talked even when you took the batteries out. Let’s not make them more advanced, okay? That said, I do have to admit that I clearly remember a time when I really wanted a Furby (why, I couldn’t tell ya), and I also remember that even more than that, a girl in my Brownies troop wanted a Furby really badly and her mother refused to buy her one so she cried for like an entire day. I don’t think she ever got that Furby in the 3rd grade (but she did get a nose job in 8th so I guess her parents made up for it?) I never wanted one that bad but about a day after I did get one, I regretted it. And so did my parents…

What creepy childhood toys weirded you out? Tell us in the comments!
Next week on Throwback Thursday: The Top 5 90s Snacks