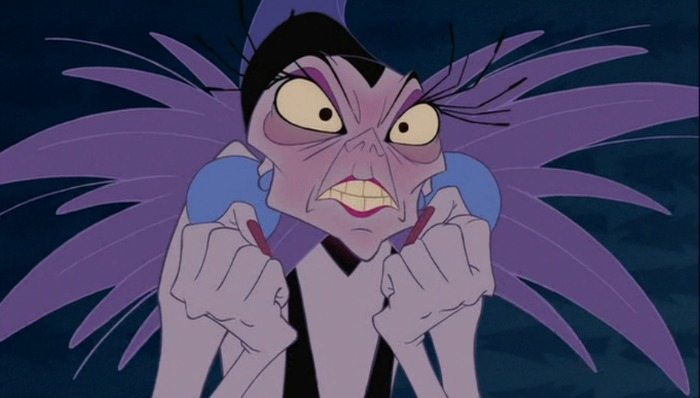 Throwback Thursday is your weekly concentrated dose of nostalgia, where we round up the bests and worsts of all things 90s, early 2000s, and basically everything that made our youth the greatest. This week: The 5 most magnificently evil Disney villains.

Lately, I’ve been feeling a little bit lecherous.  I’ve been involved with some shady and nefarious affairs in recent times.  Okay, okay, I’m a pretty well-behaved most of the time, although I did drink all of my mom’s wine last weekend (which, I’ve heard, is really just a good excuse for her to buy more wine.) Anyway, you all know my two favorite things (aside from Hermione Granger and Paul McCartney) — debauchery, and Disney. I am a sucker for a villain! Of course there are the classic Disney villains, like Shere-Kan and Kaa from The Jungle Book, and the Evil Queen of Snow White.  Then there are some of our favorite evil gentlemen, like Captain Hook and Jafar.  We also have villainous ladies who like to turn themselves into other things, like Maleficent who turns herself into a dragon in Sleeping Beauty, and Ursula (AKA the Sea Witch) who turns herself into a human and then a super giant Ursula in The Little Mermaid.  But you guys get the point.  Here are my favorite Disney Villains:

The Evil Stepmother is one of those classic villainous archetypes that I find super fascinating.   There is a heavy amount of literary conversation surrounded on the role of the archetype in folklore and fairytales, but I’m not the expert in any of that, I just took one class on the Grimm Brothers in college, and you all know how Google works.  The Evil Stepmother in Cinderella is a pretty solid example of the archetype.  She’s also cruel and calculated.   Although if I were to play Devil’s Advocate—and I think I will, as I often do—I might say that she was just trying to look after her own daughters and make sure that they were well-off in a time where women weren’t always treated so great.  Also, did you guys know her name in the movie is Lady Tremaine?  I didn’t either.

Gaston, Beauty and the Beast

Beauty and the Beast is my all-time favorite Disney movie.  I mean come on, it’s about a brunette who likes to read—where have I seen that before? Gaston is your typical arrogant jerk.  Although, no one’s slick like Gaston, no one’s quick like Gaston, no one’s neck’s as incredibly thick like Gaston’s.  And boy does that guy know how to work a crowd.  Not only does he get everyone to break into rousing song, but he also works them all up into a frenzied mob to go after The Beast.  Although he may be a total narcissistic nitwit, in the end, you feel a little sorry for the guy.  All he wanted was one date with Belle.  Well, one date, and instant marriage as per the Disney lifestyle.  Okay, you’re right, I don’t really feel that sorry for him.  He’s just a spoiled-brat who couldn’t handle being told “no”.

Everybody knows 101 Dalmatians is my secret fantasy dream life.  Roger and Anita are the perfect Disney couple.  Also Roger is a total hipster, but that’s unrelated.  Cruella de Vil is a great VILlain (see what I did there?).  She’s got two goofy henchmen, a creepy abandoned mansion, and also, what is more evil than wanting to kill puppies in the name of high fashion and a fur coat?  Plus, have you seen her drive?  She’s a totally crazy driver.  I know there are some great action movies out there with excellent car chase scenes, but I think 101 Dalmatians takes the cake.  Does anyone else have very vivid memories of Cruella’s eyes in that scene?  And, on top of all of this, she also has a great jazz song written about her.  If that doesn’t say infamy, I don’t know what does.

Talk about sibling rivalry and also a semi-loose adaptation of Hamlet.  Can we please address something that has bothered me for basically what feels like my entire life?  How did he get the name “Scar”? I’m guessing he wasn’t born with the scar.  And if he wasn’t born with it, why would someone name him that? So, that probably wasn’t his original birth name, but what was his name before everyone called him “Scar”?  And how did he get the scar in the first place?  No wonder he’s such a bitter guy, everyone calls him “Scar” which just draws attention to one of his features that he probably doesn’t even like very much.  How would you feel if someone called you Big Freckle or Gapped Front Teeth?  Can we just cut the guy a break?  He obviously wasn’t loved enough as a kid because his parents passed him over for Mufasa, and he clearly had a traumatic experience that gave him a big scar, AND everyone has to call him “Scar” to rub it all in his face?

Yzma is a villain like no other and genuinely someone I aspire to become.  While everyone else may say that she’s “scary beyond all reason”, she calls herself “beautiful”.  She has a secret laboratory and malicious intentions, plus the attitude and sass of a true diva.  If you cross her, she could turn you into a cow—but she’ll probably also let you take the day off of work.  Or she might turn you into a bug, and put you in a box, and put that box in another box, and put that box in another box, and mail it to herself, and SMASH IT WITH A HAMMER.  While she may seem perfect, she is also a great reminder that everyone, even an evil genius, has flaws.  Sometimes her plans don’t always work out—obviously there was a big mistake in her plot to kill Kuzco (voiced by the hilarious David Spade).  Plus, the entrance to her lair has that extra lever—why does she even have that lever?

But, my personal favorite Yzma moment is at the dinner in which she fails to poison Kuzco, and instead tries to communicate to Kronk, her loveable, yet dimwitted henchman, with broccoli to “hit him on the head.”  Basically, Yzma is villainous comic gold and a manipulative mastermind, and I love her.