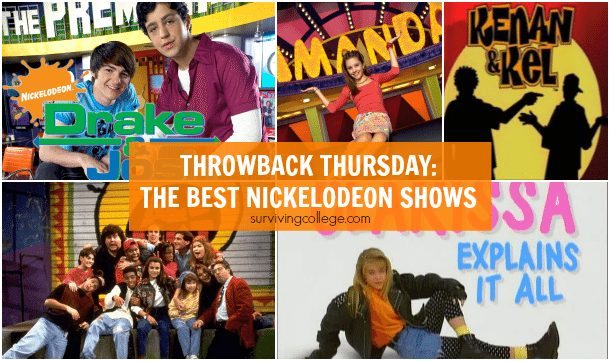 Throwback Thursday is your weekly concentrated dose of nostalgia, where we round up the bests and worsts of all things 90s (and the early 2000s.) This week: The top 5 live-action Nickelodeon shows!

Nickelodeon may have had some fairly trippy television going on back in the day—everyone here knows how I feel about CatDog—WHERE DOES IT POOP?!—but, that being said, some pretty quality programming came from Nick as well. While we may not have noticed what exactly was happening at the time, Nickelodeon was taking some pretty daring risks for kids’ TV. Sure, there were all the classic dynamic duos—two trouble makers, or the odd couple—and typical sketch shows with punch lines that had us rolling on the floor and our parents staring blankly into their cups of coffee confused about what was so funny about having the wrong number, but the producers over at Nickelodeon also had some tricks up their sleeves. Their protagonists broke the fourth wall, and they often featured strong female leads. So, way to go, Nickelodeon! And without further ado, here are the best live-action Nickelodeon shows.

Clarissa Explains It All

If you don’t love Melissa Joan Hart, you have no soul, a heart of ice, and veins of steel. Melissa is, to say the very least, perfection and magic. But before she was talking to sassy cats and snarky aunts as Sabrina the Teenage Witch, she was Clarissa, explaining it all—and explain she did. The show touched up all the typical teenage lifestyle topics like pimples and boys, but also delved even further, pushing some of Nickelodeon’s boundaries, highlighting major social issues like sex and partying, which was a big deal for Nickelodeon at the time. Clarissa was also what most people would call a strong, independent young woman. It was Clarissa that really set the stage for Nickelodeon’s future strong female protagonists—you’re welcome, iCarly. But what’s really important is that Clarissa’s best friend was…A BOY. What?! Girls and boys can be friends?! Why didn’t anyone tell me?!!!

Awwww, here I go! Kenan and Kel are the original Nickelodeon duo, harkening back to great comedic teams like Abbot and Costello, or, as Coolio claims in the theme song (that’s right, Coolio did the theme song!) Magic Johnson and Kareem Abdul-Jabbar (look at me, talking about sports!) The general premise of the show consists of Kenan as the scheming-mastermind funnyman, and Kel as the often frazzled and confused, orange soda loving straight-man that reluctantly follows along with Kenan’s plans. The question that all of us like to ask is: Whatever happened to Kenan and Kel? Well, you can all find Kenan once a week on NBC’s SNL. Kel? Apparently he was a voice actor for some TV show called Motorcity. I would now like to start my campaign for Kel: Put Kel on SNL!

All That, which often featured Kenan and Kel, was like SNL for kids. Some quality catchphrases came out of it. I still can’t walk into a library without wanting to shout, “QUIET, THIS IS A LIBRARY!” And I’m pretty sure my coffee addiction stems directly from the Sugar and Coffee sketch. But, let’s be real here for a second, everyone’s favorite All That sketch was definitely Ask Ashley, featuring none other than Amanda Bynes! Nickelodeon was really great at recognizing talent, as Amanda went on to have her very own show, which in turn was where Drake and Josh got their start. So, thanks, All That, a.k.a. Baby SNL for spawning some of Nickelodeon’s greatest shows!

Let me just start by saying, I love you, Drake Bell, I still have all the words to all the songs on your first CD memorized, and if this thing I have with Paul McCartney doesn’t work out, then I’m available to marry you. Drake and Josh are another quality Nickelodeon duo, with Drake as the hot, not quite so bright, guitar playing brother, and Josh the smart and funny chunky one—although has anyone seen Josh Peck these days? Because he’s looking pretty good now that he’s aged. Josh and that guy that played Neville in the Harry Potter movies (Matthew Lewis) must be working out together or something. So let me just repeat that for emphasis, EMPHASIS, Josh you are lookin’ fiiine nowadays too. But, let’s get real here, Drake and Josh were not complete without Miranda Cosgrove as their kid sister, the maniacal Megan. Without Miranda’s metaphorical bucket over their door, the show might have gotten a little boring.

Before I say anything snarky or offensive at all, let me just directly address Amanda for a hot second. Amanda. Sweetie. Honey. Sugar plum. What’s happening with you right now? What are you doing? “What, what, WHAT are you doing? Look at your life. Look at your choices.” Amanda, we love you, but we’re all just a little concerned right now. As Penelope might say, “Amanda, please!” Please, Amanda, pull it together. We need you. That all being said, it’s time to bring in the dancing lobsters! The so originally titled Amanda Show was pure comic genius. Anyone who doesn’t still find Moody’s Point and the Girls Room to be hilarious has no sense of humor. Also, Drake Bell satirizing SNL’s supermegafunnyawesomefamous Wayne’s World sketch as Totally Kyle was totally hysterical…like…totally. Basically, nobody will ever match the sheer brilliance that was The Amanda Show, so Amanda, if you’re out there reading this somewhere on whatever mothership you’ve gone off to, come back to us!

What were your favorite throwback Nickelodeon shows? Tell us below!
Next week on Throwback Thursday: The Top 5 90s Books