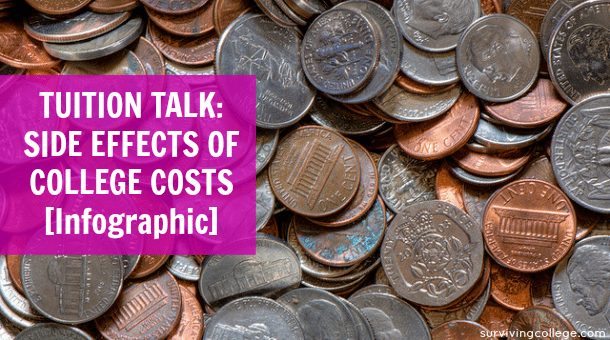 Tuition Talk: where we vent our frustrations with the so-called “higher education bubble.” Raising questions such as “why do college presidents make so much money when students are struggling and in debt?” and “is college even really worth it anymore?” Check back on Thursdays for more!

High school seniors across the country are currently making one of the most important decisions of their lives: where will they go to school this upcoming fall?  There are a number of factors that contribute to where a high school grad attends college, but the most pressing issue affecting future and current students (as well as recent grads) today is the skyrocketing cost of college.

You already know that college costs often bury graduates under insurmountable student loans, but unfortunately, they’re affected in more ways than one. We found this awesome infographic that has all the facts. Did you know that only 66% of students with parents very concerned about finances applied to college, as opposed to the 90% of students whose parents are not concerned with finances? Unfortunately, rising costs also influence many students to drop out of college entirely.  Not only have these students already amassed large quantities of debt in their time at school, but they also have no degree to show for it – without that degree, it will take them even longer to pay off their student loans.

Many students take out multiple loans in an attempt to combat rising tuition costs; however, the additional debt can sometimes set them back in more ways than they anticipate.  Often, young adults delay buying their first home due to rising debt.  Unable to live on their own, many graduates are forced to move back home with mom and dad. Also, when students are forced to delay buying their first home because of student debt, they are more inclined to delay getting married, having children, and pursuing medical/dental care.

Rising tuition costs also impact students’ future careers. Thirty-six percent of college students start their own businesses as opposed to attending college, and 21% start a business due to unemployment. However, starting a business brings the risk of falling even further into debt.  In some cases, student debt outweighs starting salaries in some fields, making it difficult for college grads to pursue a career in their field.  This leads to graduates choosing to work in other fields where they may be unhappy, but at least the demand is higher.

Check out the infographic below and tell us your thoughts on rising college tuition and its effects on students!

How do you feel about the side effects of college costs?